The war in Syria is hitting Iran ever closer to home, prompting Tehran to push for closer coordination with Russia, even as leaders on both sides complain of a lack of confidence and tactical misalignments. 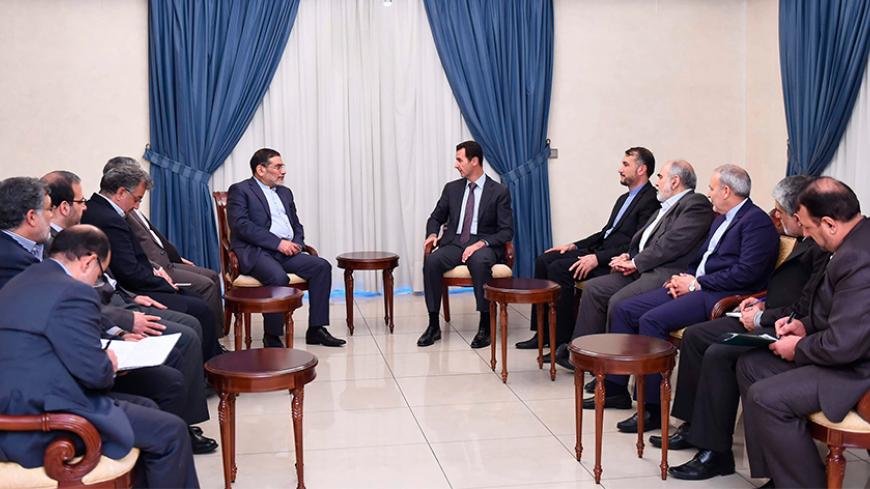 For Iran, the ongoing war in Syria is no longer a matter of regional security. The conflict now has direct effects and implications for Iran's national security. This perspective is clear in the daily statements coming from Tehran, from the images of slain Iranian soldiers and high-ranking officers laid to rest in the Iranian capital and most recently the appointment of Rear Adm. Ali Shamkhani, the secretary of Iran’s Supreme National Security Council, as military and security coordinator of the joint cooperation group on Syria with Moscow and Damascus.

Shamkhani's appointment came in the wake of the recent summit that brought together the defense ministers of Syria, Iran and Russia in Tehran. It was clear from the meeting that the three countries are keen to boost their cooperation after having suffered some major setbacks in past weeks. These losses have been blamed on a lack of coordination and major differences over objectives, according to a Syrian official who spoke to Al-Monitor on condition of anonymity. The Syrian official said, “Russia, as a major world power, was looking at the scene from its position … and thought that giving peace a chance should have saved a lot of lives. The other side — the United States, mainly — wasn’t serious about its commitments. Therefore, the attacks by militants were more brutal than before and this caused some losses in the field.”

Once a naval commander of the Islamic Revolutionary Guard Corps, Shamkhani will report directly to Iran’s Supreme Leader Ayatollah Ali Khamenei, “who’s the man who has the final say on main issues in Syria,” an Iranian official told Al-Monitor in a telephone interview. The official, who spoke on condition of anonymity, explained that Shamkhani knows Iran’s “red lines” very well and that he’s in direct contact with Khamenei. He said, “The supreme leader is following every detail in Syria because he believes that this war is in fact on Iran the same as it is on Syria. He also supports every kind of coordination with friendly and allied parties to this war, as it is a world war that needs each and every effort.”

The official indicated that Tehran supports every effort aimed at ending the Syrian conflict, saying, “In Geneva, Vienna or anywhere, seeing people sitting together around the table is the best thing. Yet sitting just to buy time doesn’t make sense. The Americans are buying time for their new president at the cost of lives in Syria. We can’t accept such hesitation amid people’s tragedies.” He added, “Our friends the Russians went to the end [of the road] with the Americans. We warned on several occasions that this is not right. We even lost several officers and observers because of Russia’s position, and now that they discovered that there’s no outcome, we are going to start a new level of cooperation.”

The Iranian official concluded, “Iran, Russia and Syria agreed on a common goal: combating terrorism, which today is the main threat to the whole region. Our cooperation, common vision and commitment will give good results, and this happened in the past months and years despite some complexities we are facing. What we are quite sure of is that this cooperation will achieve a lot of hope, and for sure we will all emerge victorious.”

But how will this be reflected on the ground?

A Syrian field commander told Al-Monitor he expects that the coming weeks will see an escalation of the situations in north and east Syria, “The Iranians are sending more troops. … Some have already arrived. And the Russians informed us that new plans are going to be implemented in Syria and this might involve real changes in tactics. What we are sure of is that the more our allies are on the same track, the closer we are to victory.” The commander suggested that even on the Iranian side, there have been some differences in the way things are done on the ground, and said, “As time is passing, this is becoming part of the past and we hope from now on that things will assume a better direction.”

While a major portion of Aleppo is under the control of the Syrian army and its allies, battles are expected in districts that were lost to opposition groups and Jabhat al-Nusra. As for Idlib and Raqqa, a major attack by the Syrian government and its partners will mean the deployment of thousands of forces and aerial cover by Russia, a move that might sabotage the fragile cease-fire agreed on with the United States.

On June 6, a Russian official who spoke off the record in Moscow told a group of journalists, including Al-Monitor’s correspondent, that relations with Washington are surreal. “One day we agree on something, the second day they do the opposite. When we ask them, they blame it on others. There’s difficulty in building confidence with them. Even when they commit themselves to an agreement, it takes them months to implement it.” While the Russian official stated firmly that his country is committed to a peaceful solution in Syria, he suggested that some Persian Gulf countries are becoming more flexible about Syria. “They are ready to accept a provisional period with Syrian President Bashar al-Assad in office, but in return they want guarantees that Iran will have no role: not in Syria alone, but in the whole region. This is not possible, for Iran is a main power in the region along with Saudi Arabia — and both have a role to play.” The official concluded, “We regard our forces, the Iranian forces and Hezbollah as the only legitimate foreign forces in Syria, and therefore we are coordinating together.”

Indeed, one Syrian official told Al-Monitor on condition of anonymity that visiting Russian Defense Minister Sergei Shoigu informed the Syrian president in their June 18 meeting that “new Russian troops are to be deployed in Syria next week.”