Is Egypt taking lessons from Russia when it comes to wooing youth?

Similar to Putin’s Nashi youth movement, is Sisi creating the Fourth Army to use the youth to his advantage? 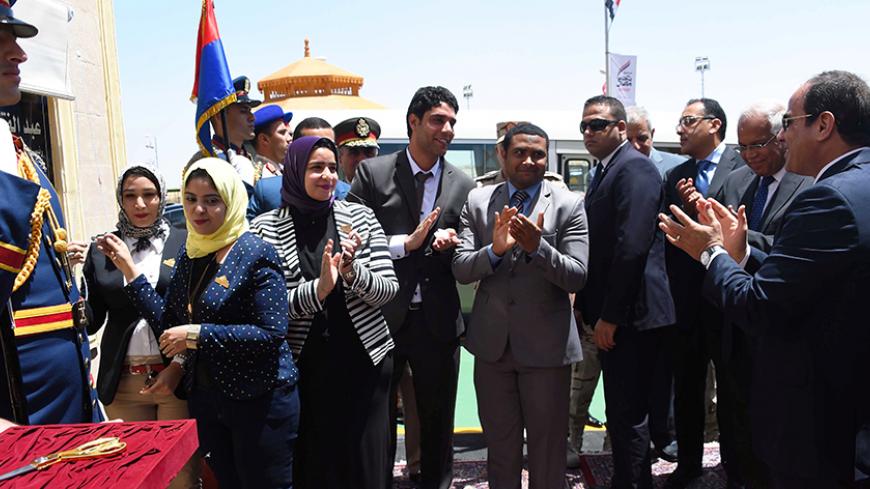 Egyptian President Abdel Fattah al-Sisi (R) is seen alongside youths during the opening of the first and second phases of the housing project "Long Live Egypt," which focuses on development in the country's slums, at Al-Asmarat district in Al Mokattam area, east of Cairo, May 30, 2016 - REUTERS/The Egyptian Presidency

Egyptian President Abdel Fattah al-Sisi has been prominently promoting youth organizations during his rule, and observers differ on whether he is motivated by altruism or personal gain — though most are betting on the latter.

“Long Live Egypt … Thanks to the Strength of Its Youth” is the name of a program he launched Sept. 13 with the stated purpose of grooming young people for political leadership and preparing them to assume political and administrative state responsibilities. The goal is to form the “nucleus” of a young society that thinks, learns and innovates in accordance with the program.

Conversely, though, some people believe the tacit aim is to exploit the youth and form a political support system for the president, particularly considering that Sisi is not affiliated with any political parties and depends on the military’s popular support base.

On Jan. 9, Sisi launched the “2016, Year of the Youth” campaign, claiming that he is seeing strong interest among young people in the political arena. It didn’t go unnoticed, however, that the campaign launch came at the same time that police forces began an unprecedented detention movement to suppress opposition against the president. The crackdown particularly seemed to target those who rejected the protest law and objected to the surrender of Tiran and Sanafir islands to Saudi Arabia. The detainees were jailed on charges of seeking to overthrow the government and spreading disorder.

The Egyptian president’s experiment to use the youth is reminiscent of the Russian experience in that regard. The Nashi youth movement was established in 2005 with financing from businessmen loyal to the regime to provide Russian President Vladimir Putin with popular support against his opponents.

Sisi, who personally oversees the program to prepare young people for political leadership, acknowledged during his May 16 meeting with Arab youth ministers the importance of preventing young people who feel an emptiness from filling such a void with destructive or erroneous ideas, as he put it.

Some political parties that are funded by businessmen, such as Nation’s Future, Protectors of the Nation and the Republican People's Party, are calling for the establishment of a 27,000-member youth “Fourth Army” to support the political leadership.

In its manifesto published May 15, the Fourth Army stated, “We decided to be the nucleus of a structure that defies hardships and attains the impossible, through which we can express our opinions and endeavor to mold a nation that allows us to build our own future.”

In statements made Sept. 15 to the Egyptian daily Al-Youm Al-Sabeh, administration sources said the program aims to groom young leaders irrespective of their political affiliation.

Cairo University political science professor Hassan Nafaa affirmed that Sisi’s calls for the development of youth to participate in political life is an attempt to form a core of pro-regime supporters. That achievement would preclude the formation of any popular opposition movement, in light of the persistent erosion of Sisi’s popularity, since the regime’s actual goal seems to be arresting young people in droves just for expressing their opinions or demonstrating.

Nafaa added, “Considering that young people are its staunchest opponents, the state’s attempts at intervening to create a politicized youth program, or a dependent political movement similar to those preferred by totalitarian regimes, as did deposed President Muhammad Hosni Mubarak, shall be doomed to fail.” He explained that Sisi’s experiment is reminiscent of that attempted by late President Gamal Abdel Nasser, which collapsed with the fall of the Arab Socialist Union. He also pointed out that some of the pro-Sisi parties calling for a political support system under the name of the Fourth Army lack real popular support, and instead are backed by security agencies and run by pro-regime businessmen.

Nafaa asserted that Sisi’s calls have nothing to do with reality and would fail to convince people of the existence of a true democracy in the country, in light of the security crackdown currently underway. He explained that Sisi was trying hard to compensate for his eroding popularity due to the worsening performance of state institutions and the successive economic crises that have devastated the country.

He added, “Egypt is currently ruled by the security agencies, and attempts are underway to reinstate the dissolved National Democratic Party. All indications confirm that we are headed toward a more authoritarian totalitarian regime. Despite the [current regime] enjoying a popular majority, it has begun to erode with the spread of crime and insecurity, exacerbated by the unrelenting rise in prices and unemployment.”

However, Fawzi Ismail, secretary of the Youth and Sports Committee in Egypt’s parliament, said just the opposite, “The president wants to develop young people intellectually and prepare them for participation in political life. Sisi’s popularity is constantly rising, and he would be re-elected if he were to run time and time again. He does not need to establish a support base.”

In statements to Al-Monitor, Ismail rejected the Fourth Army initiative proposed by the Nation’s Future Party, which he asserted has yet to effectively contribute to political life and relies on slogans due to its lack of achievements. He said the Fourth Army nomenclature was ill-conceived because it will be exploited against the Egyptian Army at a later date.

Abdul Ghaffar Shukr, a leftist politician and vice president of the National Council for Human Rights, said the call to prepare young people should have come from political parties and not the presidency. He also believes Sisi plans to exploit young people to form a political support base. This seems obvious, he said, since their activities are subject to presidential supervision.

“The regime attacks young people who act independently and are critical of its conduct, while, through the presidential program, it protects those who support government policies. Some ineffectual parties run by Egyptian security and sovereign entities are preparing themselves to become the president’s political base, in light of the close relations linking their leaders and officials with the presidency.”

Hisham Fouad, a leader of the Revolutionary Socialists movement, also said he thinks the president is hoping to lessen his vulnerability of not being officially affiliated with any party. Fouad further stressed that the political scene under Sisi’s regime relies on gagging political and trade unionist dissent, especially among the youth.

“The ruling regime is focusing on a specific group of young people that it wants to mobilize into a popular militia that protects it and is used by it at the opportune times,” Fouad told Al-Monitor. “The regime refuses to allow any diversity of opinion and represses all dissenting views. The state has adopted a systematic plan whereby the political and trade union scene becomes totally supportive of the current regime, [which] endeavors to repress all opposition, particularly [the opposition of] revolutionary and youth forces engendered by the January 25 Revolution.”