As the Egyptian government nears adoption of a new cybercrime law, human rights organizations and observers decried the move, considering it the latest government tool to crack down on dissent. 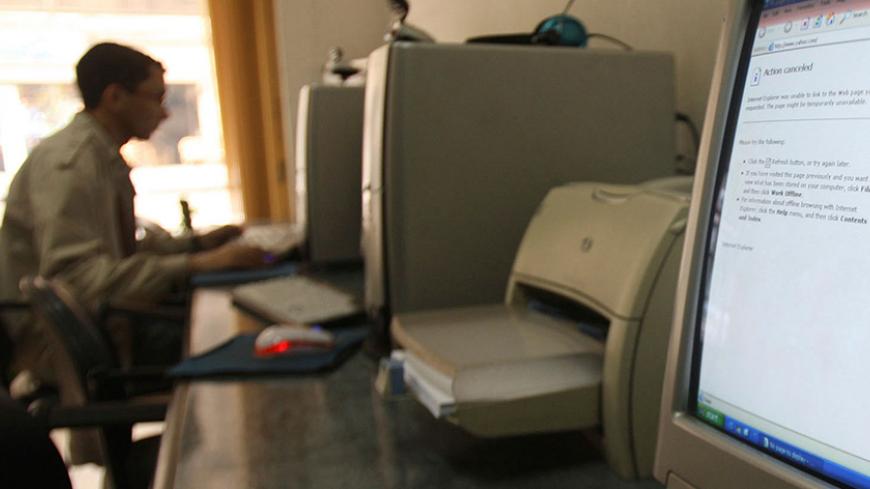 CAIRO — In what observers, human rights activists and politicians consider a setback for freedoms in Egypt and a prelude to a historic turning point toward stifling dissent and cracking down on the young opposition, the Egyptian parliament began work on a new cybercrime law on May 10.

The move came after the Suggestions and Complaints Committee accepted parliament member Tamer Shahawy’s motion calling for action against “chaos” and individual "violations" on the internet. Some Egyptians had gone online to express their strong opposition to government moves including the Egyptian government’s decision to cede to Saudi Arabia the islands of Tiran and Sanafir. Shahawy considered the internet outcry a threat to national security.

A military man, Maj. Gen. Shahawy was nicknamed “the intelligence falcon” by his supporters for the 20 years he spent in the Egyptian military intelligence service before being elected to parliament.

On May 10, Shahawy announced that a number of government officials were present during the meeting to discuss the new bill, including representatives from the Defense and Interior Ministries. The bill was then reviewed by the defense and national security and communications committees before being put to a parliament vote.

In a petition submitted to parliament, Shahawy noted that the law aims to protect national security, saying, “As a legislature, and given the constant threats to Egypt’s national security in all its national, regional and international bodies, and since in recent years, such threats have relied on modern technology and the digital space, it is now our duty to take strict and deterring measures to counter these threats in order to protect our oblivious citizens through legislation that ensures the Egyptian state’s safety.”

The new law mandates a life sentence — 25 years — for anyone who creates or uses a website with the purpose of establishing a terrorist entity; promoting its ideology; exchanging its messages and assignments; or funding, owning, wiring and providing money, arms, ammunition or explosives to the benefit of such entities.

The law also calls for three years’ imprisonment and a fine of 2 million Egyptian pounds (about $225,000) for any service provider that fails to comply with the criminal court decision to block certain websites or links. If such a failure results in the death of a person or the destabilization of national security, the perpetrator shall be sentenced to life or death with a fine not exceeding 20 million Egyptian pounds ($2.25 million).

It calls for but does not define the safeguarding of society in the event of a violation or threat to the public order, obstruction or hindrance of the efforts of the authorities or damage to national unity and social stability.

Under the law, the armed forces, Interior Ministry and the General Intelligence Directorate shall be granted the power to suspend the services of any unregistered network user.

Shahawy’s proposition was strongly criticized by several human rights organizations, which considered the bill a new instrument by which the government is trying to crack down on dissenters expressing their views on social media outlets after these websites fueled the January 25 Revolution and facilitated its success. For instance, the Democratic Current alliance fears that the law aims to restrict freedoms.

On May 15, law professor and head of the Cairo Center for Political and Legal Studies Ahmed Mahran told the press that the cybercrime law contains many of the same clauses found in the counterterrorism law. Such clauses will lead to further restrictions on rights and freedoms, especially the freedom of expression. “As per the new bill, users of social media could be jailed for any post the government deems dissent. As a result, any post could be considered a threat to national security,” he argued.

Gamal Eid, human rights lawyer and head of the Arabic Network for Human Rights Information, told Al-Monitor, “Five years after the January 25 Revolution, the Egyptian government has yet to learn the lesson and understand the Egyptian people’s mentality, especially the youths who feared neither imprisonment nor the oppressive regime before the great revolution that impressed the whole world. These youths tried to force the state to change its oppressive policy and implement new mechanisms that uphold democracy through the rule of law. However, the current government seems to have failed to learn the lesson and continued its crackdowns.”

“Unfortunately, the same police state is still in power. The man behind the new bill — Maj. Gen. Tamer Shahawy — has a military background and therefore cannot grasp the dialogue mentality, as he is used to issuing and executing orders. It is impossible for such a man to accept that the era of totalitarianism is over and that he can no longer silence the Egyptian people."

Eid scoffed at the clause mandating imprisonment for anyone who threatens national security through inciting violence and spreading hatred, arguing that its wording is too loose, giving the regime the power to arrest dissenters for whatever they consider national security considerations.

In Egypt, social media outlets such as Facebook and Twitter have not only served as platforms for expression, but also helped further campaigns and rallied support for urgent social causes, while local and traditional media outlets have come up short.

On May 11, public pressure over social media was able to force former Justice Minister Mahfouz Saber to resign. A Facebook campaign called for his resignation after he made a controversial statement about how the son of a garbage collector cannot become a judge, because a judge has to grow up in a respectable environment.

On May 13, parliament member Sharif Ismail dismissed Justice Minister Ahmed el-Zend against the backdrop of social media outrage following derogatory remarks about the Prophet Muhammad. Zend had said, “If the Prophet Muhammad broke the law, I would imprison him.”

In response, pro-government TV host Ahmed Moussa criticized such use of social media during his program on Sada el-Balad, saying, “No government in the world can be run from Facebook.”