The parliamentary communications committee has approved a draft law to combat cybercrime amid criticism that this draft law, if approved, would further stifle freedom of expression. 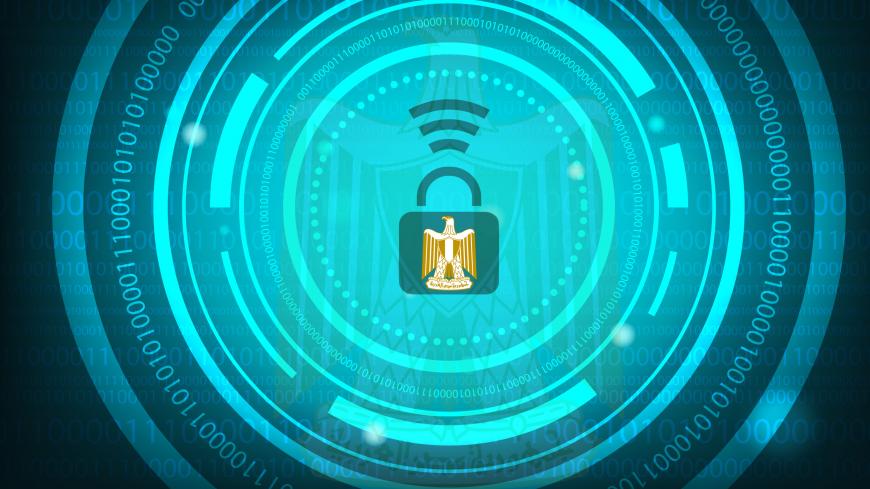 CAIRO — Nidal al-Said, chairman of parliament's Communications and Information Technology Committee, announced on April 16 that the committee approved a 45-article draft law submitted by the government to combat cybercrime. He told the press that the committee is now working on preparing a report on the bill to submit to parliamentary speaker Ali Abdel Aal for adoption.

The committee finished discussing all articles of the draft law in less than a month and a half, as it held its first meeting on March 5 in the presence of representatives of 19 ministries, including the ministries of Defense, Interior, Telecommunications and Information Technology.

Mohammad Hijazi, representative of the Ministry of Communications — which submitted the draft law to parliament on Feb. 13 — explained during the March 5 meeting that the draft law is divided into two parts. The first includes the obligations of service providers in terms of securing users’ information, saving data and tracking procedures in the event of a crime, while the second part covers all types of cybercrime. Hijazi pointed out that technological development has produced a range of crimes representing a threat to national security, in reference to websites inciting against the regime.

The bill has stirred nationwide controversy. Observers believe some of its articles aim to entrench state control over websites and set a legal framework for blocking them, all the while intimidating social media users. The Communications and Information Technology Committee, however, denied such accusations, arguing that the law aims to control the technological system in Egypt and not to undermine public freedoms or shut down social media websites.

Article 7 of the draft law grants the competent authority in charge of investigating cybercrime the right to shut down Egyptian-based or foreign websites that incite against the Egyptian state or threaten “national security” through the use of any digital content, expressions, photos, video footage or advertising materials.

According to a report published in February by the independent Association for Freedom of Thought and Expression, 497 Egyptian sites have so far been blocked since May 2017, ostensibly to protect Egyptian national security.

Article 23 of the draft states that "anyone who possesses, acquires, brings, sells, makes available, manufactures, produces, imports, exports or trades any device, equipment, software programs, passwords or other similar data without authorization, or without factual or legal justifications, with the intent to use them in crimes that threaten national security" can face up to two years in prison and a fine of 300,000-500,000 Egyptian pounds ($17,000-$28,000).

Meanwhile, article 26 provides for imprisonment for a period of no less than six months and a fine between 50,000-100,000 Egyptian pounds for anyone who violates any of the so-called family principles or values of Egyptian society. Article 27 also calls for imprisonment for a period between two and five years and a fine between 100,000-300,000 Egyptian pounds of anyone who deliberately uses an information technology program in processing other people’s personal data to violate public morals or prejudice the honor or status of a specific person.

The draft law on combating cybercrime had previously hit a stalemate due to all the criticism. Tamer al-Shahawi, a member of the parliamentary Defense Committee, submitted a draft law on this subject on March 1, 2016, but observers criticized how some articles violated the Egyptian Constitution by restricting public freedoms.

Although parliament's Suggestions and Complaints Committee had accepted the proposal, it remained “under lock and key” for unclear reasons and the competent committees never discussed it.

On March 7, Mohammad Ahmad, 22, was murdered. The perpetrators had deceived the young man through an ad they posted to sell a laptop via a site called OLX. They met in Cairo, where they stole his money and stabbed him. The offenders remain at large.

The incident accelerated the discussion of this draft law, given the public’s sympathy and the hideousness of the crime.

Said commented on the incident in a press statement on March 9, noting that the lack of clear data on websites, users and administrators makes it harder for law enforcement to catch criminals.

In a speech during workshops organized by the Ministry of Justice on March 12, titled “Combating Terrorist Ideas,” Minister of Communications and Information Technology Yasser al-Qadi stressed the importance of this law in fighting the use of social media to spread terrorist ideas.

He said that after the January 25 Revolution, extremist groups were able to attract ill-minded people through technological means, and the Egyptian state should have dealt with this by enacting laws and establishing mechanisms to control the communications and social media market. Egyptian Minister of Justice Hossam Abdel Rahim pointed out that fighting extremism through means of communication is as important as the army's fight against terrorism.

Abdelnaby added, “Let’s say a journalist receives certain information about the resignation of the minister of interior and publishes the news. Authorities could arrest him or her, even if the news were true, under the pretext of threatening national security. This is why this draft law is contrary to the provisions of the constitution that guarantee public freedoms.”

Article 65 of the constitution states that freedom of thought and opinion is guaranteed and all individuals have the right to express their opinion through speech, writing, imagery or any other means of expression and publication.

Khaled al-Balshi, former head of the Freedoms Committee at the Press Syndicate, told Al-Monitor that the motivation behind this draft law is the January 25 Revolution that toppled Hosni Mubarak’s regime.

Balshi added, “This is exactly why the regime believes [social media] poses a threat to its survival, due to the absolute freedom it provides — unlike traditional media, which is completely controlled by the regime. For the regime, controlling the electronic system is a major challenge. This explains why this draft law has been put forward then put on hold several times by parliament.”