The Iraqi cybercrime bill makes a reappearance amid widespread objections by civilians and activists who label it as repressive of freedoms and rights guaranteed in the Iraqi Constitution. 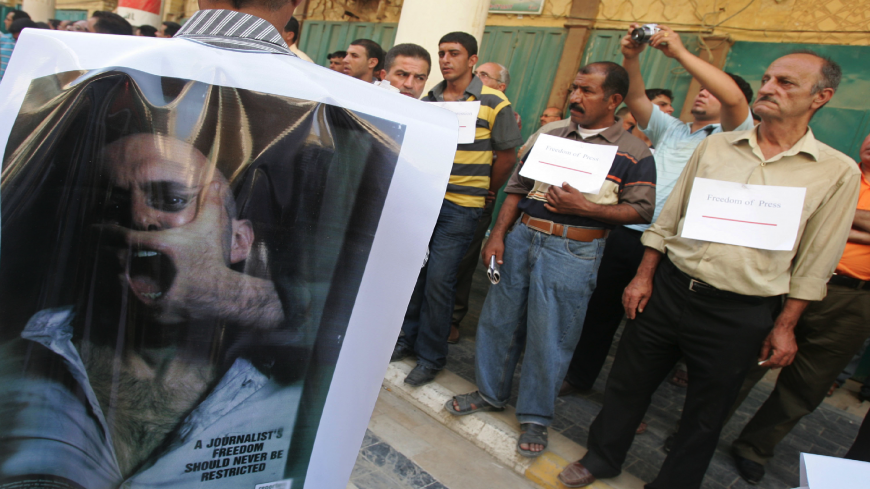 Iraqi journalists are seen as they take part in a protest for the freedom of speech at al-Mutanabi book market on Aug. 14, 2009, in Baghdad, Iraq. A group of Iraqi media associations and journalists organized a protest which focused on freedom of expression, freedom of information and the worsening environment for media in Iraq. The Iraqi government intends to impose control on information both in print and online, a move that sparked fears of a crackdown on freedom of the press.

The proposed cybercrimes bill returns to the fore after the Iraqi parliament completed the first reading of the draft last week. This makes it the fourth attempt in which political parties seek to pass legislation codifying freedom of expression in the country. Similar attempts ended in vain in 2007, 2012, 2018 and 2019.

Media and human rights circles in Iraq believe that the bill — proposed by the committees of security, defense, legal affairs, education, culture, tourism, human rights, services, reconstruction, communications and media — is the harshest of similar laws in the world as it represses freedom of expression and imposes restrictions on social media sites. On Nov. 26, Human Rights Watch described the draft bill as “yet another tool to suppress dissent,” in violation of international law. For its part, the Iraqi Observatory for Human Rights described it as an attempt “to intimidate society.” The Observatory said the draft law was written based on a police state approach, similar to the one adopted by the authorities during the October protests and which was intended to suppress voices opposing it. It denounced the cybercrime law as aiming to stifle “freedoms and rights'' guaranteed in the Iraqi Constitution amid widespread objections by civilians and activists.

The draft is legislation governing the crimes of publication on social media and the misuse of computers and electronic devices that cause harm to others or national security. It defines cybercrimes as “a positive or negative criminal activity involving the use of advanced technology directly or indirectly as a means or goal to carry out an intentional criminal act in the information environment.”

However, some of the articles in the draft angered the Iraqi street, media and even political elites — such as the article requiring a prison sentence of seven to 10 years and a fine against anyone using the internet and a computer with the intention of “assaulting principles and religious, family or social values.​​” The draft states that “whoever incites, aids, agrees or participates with others to commit a crime stipulated in this law” shall be deemed an accomplice to the crime. This is among 21 punitive articles, some of which relate to encroaching on any religious, moral, family, social, or national symbols and values, promoting hate speech and assaulting authorities without clearly defining these concepts. This renders the draft a tool in the hands of the ruling authority to suppress dissent.

Mustafa Naser, an Iraqi journalist and a free speech activist, is the president of the Association for Defending Press Freedom in Iraq. He said that the draft in its current version is different from the versions introduced in previous years, but it is still incomplete and includes a set of punitive articles opposing the Constitution, specifically in Chapter 2 on rights and freedoms.

Naser told Al-Monitor that “the committees that drafted the bill did not even think about drafting articles to combat hate speech and sectarianism, but rather focused on the practices and activities of citizens only. “The hefty sanctions in this draft are mostly related to ambiguous concepts that are not clearly defined and sometimes violated the Iraqi penal code.”

Among the most prominent criticisms leveled at the cybercrime bill is that it punishes whoever incites a crime even when the crime does not actually take place, which opens the way for prosecution for any tweet or opinion that may be interpreted as incitement and not a criticism of the performance of the authorities or an opposing political opinion.

Article 22 provides for a prison sentence and fine for anyone who “creates, administers or helps to create a site on an information network that promotes or incites to immorality and obscenity or any programs, information, photographs or films that violate ethics or public morals.”

Meanwhile, the parliamentary blocs supporting the draft argue that it meets the need to regulate activity on the internet and prevent electronic blackmail. Parliament member and member of the parliamentary Security Committee Badr Al-Ziyadi told Al-Monitor, “Iraq registers hundreds of cases of electronic blackmail every day. Websites and computers are misused, and there must be legislation to regulate this matter and prevent the occurrence of these kinds of crimes that are not covered by existing laws.”

Regarding the wide objections to the draft, Ziyadi said, “The Iraqi parliament has responded to criticisms and proposals. The current version of the law differs significantly from the previous drafts. Some objections are raised by those who want to maintain the status quo in order to keep practicing extortion and illegal acts freely and without any accountability. The parliament presidency will host human rights and civil society organizations to discuss the current version of the draft.”

The reading of this bill in Iraq's parliament comes at a time when the issue of freedoms is subject to a wide debate after the campaign of assassinations and kidnappings of many activists, media professionals and protesters since the end of last year to date — especially those who participated in supporting the popular protests that broke out in October 2019 against the ruling parties.

This raised the ire of the media quarters in particular. Moayad al-Lami, head of the Iraqi Journalists Syndicate, believes that the draft violates the Constitution by repressing freedom of the press in the country, which is "already undermined and under constant pressure."

Lami called for amending the draft in accordance with the provisions on freedoms in the Iraqi Constitution. “The cybercrime law must be a legislation to protect everyone. We will resort to legal means of recourse should the law be passed in its current version, which was rejected by the majority of civil society organizations and various media organizations.”

It is expected that the massive protests and objections to this bill will lead to the postponement of the vote on it or to its amendment at the very least. But if the parliamentary blocs insist on passing it this time, they will be confirming the opinion that this law will help them run the early general elections scheduled for the upcoming summer away from popular criticism and possibly by suppressing dissenting voices by means of the punitive provisions of the law. 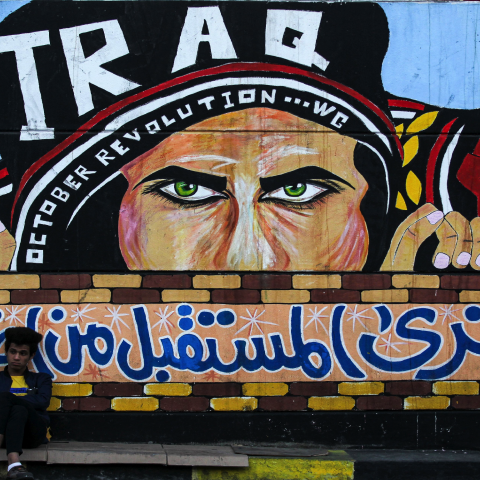