Is Washington enabling despotism in Turkey?

Washington's muted response to growing authoritarianism in Turkey under President Recep Tayyip Erdogan is spurring accusations that it is empowering him. 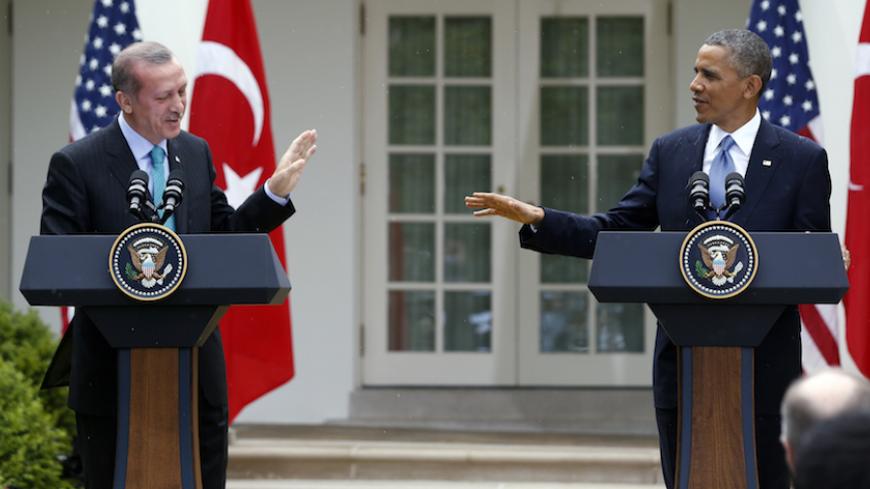 "We would expect that Turkey will follow its own democratic procedures … I am not going to speak to the specifics of an internal process there inside Turkey. Gotta go." With these dismissive comments, US State Department spokesman John Kirby ducked questions at a press briefing last week about a Turkish government-inspired bill to strip lawmakers of their parliamentary immunity and clear the path for their prosecution over alleged crimes.

Erdogan labels Demirtas and his colleagues "terrorists" over thinly supported charges that they are acting on behalf of the Kurdistan Workers Party (PKK), the rebel group with which the Turkish government was negotiating until February last year to end a bloody 32-year-long insurgency for Kurdish self-rule.

Coming on top of the collapse of a two-year cease-fire in August and a sharp escalation in violence between Turkish security forces and the PKK, the ouster of the HDP deputies would deal an additional blow to the country's fraying democracy. It would also increase political instability and deepen the chasm between Turks and Kurds, perhaps even thrusting them into the intra-ethnic conflict Demirtas recently warned against.

Mounting turmoil in a critical NATO ally ought to be of concern to the United States. But its response to the latest twist in the political drama unfolding in Ankara was typically muted.

Commenting on the effective ouster of Prime Minister Ahmet Davutoglu by Erdogan — which many call a "palace coup" that will allow the president to take full control of the country — White House spokesman Josh Earnest said, "I do not anticipate that this is going to have any impact on the ability of the United States and Turkey to work together to continue to implement our strategy to degrade and destroy Daesh [the Arabic term for the Islamic State (IS)]."

Earnest's words were something of a giveaway. Turkey is a critical if reluctant ally in the war against IS. Washington's single-minded focus on IS means that "from the US perspective the backbone of the relationship is cooperation in the anti-IS campaign," said Gonul Tol, the executive director of The Middle East Institute’s Center for Turkish Studies in Washington, in an interview with Al-Monitor. This in turn means that it is that much more willing to overlook Turkey's seemingly unchecked rush toward authoritarianism.

Washington's apparent insouciance may be something of a trade-off for its continued alliance with the Syrian Kurdish militia known as the People's Protection Units (YPG) in its battle against IS in Syria. Turkey is incensed by the partnership, calling it a betrayal because the YPG is closely allied with the PKK. Striking a balance between Turkey's security concerns and the YPG's goal of territorial expansion remains the hallmark of US policy.

Yet in recent months, Washington has been bending over backward to accommodate Turkey. The United States has stepped up air support for Turkish-backed Syrian rebels, including the jihadi Ahrar al-Sham. These rebel groups are fighting to eject IS — thus far unsuccessfully — from areas bordering Turkey, with the aim of preventing the YPG from doing so and laying claim to those territories.

Washington has reportedly arranged for meetings between Arab members of the YPG-led Syrian Democratic Forces (SDF) and Turkish officials in order to appease Ankara's fears over an imminent US-backed SDF operation to wrest control of the Syrian town of Manbij, an operational center for IS overseas attacks.

In a recent Senate hearing, US Secretary of Defense Ash Carter, who is cited as one of Erdogan's fiercest critics within the Obama administration, confessed that the YPG and the PKK were closely linked, thereby ending nearly two years of formal denial of a well-established fact.

Meanwhile, Washington has said little if anything about the gross human rights violations opposition lawmakers insist were committed by Turkish security forces as they flush out PKK militants embedded in neighborhoods in the mainly Kurdish towns and cities in southeast Turkey.

Some analysts argue that US silence stems in part from the belief that its words carry less weight than they are credited with. Omer Taspinar, a professor of international relations at the National Defense University in Washington, told Al-Monitor, "The United States has long believed it has very little leverage in terms of moving things in the right direction when they speak up." And when dealing with a prickly nationalist like Erdogan, public criticism can often make things worse.

But Hishyar Ozsoy, a prominent HDP lawmaker who traveled with Demirtas to the United States, said Washington needs to be tougher. He told Al-Monitor, "The United States needs to speak up about human rights, about the stripping of our parliamentary immunity that will have a devastating effect on stability and the peaceful resolution of the Kurdish problem. In failing to do so, the United States is tacitly encouraging Erdogan to continue with policies that hurt its own interests as well."

Many believe that Washington ought to have done more to support Davutoglu, who sought an Oval Office meeting with President Barack Obama prior to his ejection. The outgoing prime minister, who espoused a less hawkish stance on the Kurds and a more conciliatory tone with the European Union, was merely granted a drop-in by the president during Davutoglu’s bilateral talks with Vice President Joe Biden, planned for early May. A miffed Davutoglu canceled the trip altogether. Henri Barkey, Middle East program director at the Wilson Center, said that even with Washington's backing, Davutoglu would have been purged by Erdogan anyway. "This is a bulldozer coming down the side of a mountain," Barkey told Al-Monitor. Ever since the Cold War and because of Turkey's pivotal location at the crossroads of the Caucasus, Europe and the Middle East, "the United States has always put other [strategic] considerations ahead of human rights with Turkey — this is not new," he added.

Even so, Erdogan has made a key concession in recent days, withdrawing Turkey's veto over cooperation between Israel and NATO. US officials predict that diplomatic relations between the two countries, which have remained frozen since the Mavi Marmara crisis in 2010, will soon resume.

Indeed, many US diplomats claim that criticism over their Turkey policy is exaggerated. They point to Biden's tough messages on the lack of press freedom during his latest trip to Turkey.

Biden met with prominent Turkish journalists, including Al-Monitor columnist Kadri Gursel, who were fired under government pressure, saying, "If you do not have the ability to express your own opinion, to criticize policy, offer competing ideas without fear of intimidation or retribution, then your country is being robbed of opportunity."

In a recent interview with Obama for The Atlantic, Jeffrey Goldberg revealed that the president didn't think much of Erdogan's leadership either, even though he met with the Turkish leader on the sidelines of the Nuclear Security Summit in Washington on March 31-April 1. "Early on, Obama saw Recep Tayyip Erdogan … as the sort of moderate Muslim leader who would bridge the divide between East and West — but Obama now considers him a failure and an authoritarian, one who refuses to use his enormous army to bring stability to Syria," Goldberg wrote.

Erdogan would likely retort that it is Obama who is refusing to use his enormous army to bring stability to Syria and instead is relying on local partners on the ground. And for as long as this policy remains, Washington will continue to rely on local partners such as Turkey and largely "ignore Erdogan’s power grab in order to secure Ankara’s support in the fight against IS," Tol concluded.