Pro-Kurdish political parties in Turkey are keeping their hope for Joe Biden’s presidency with utmost caution. 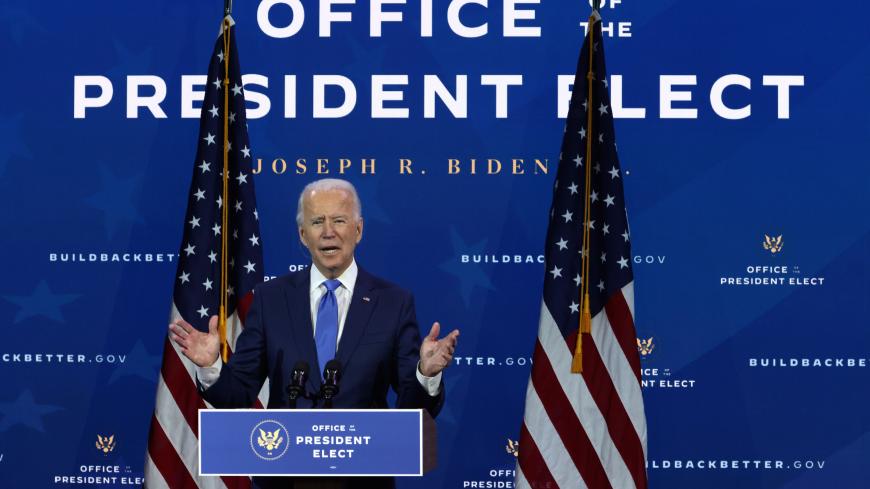 US President-elect Joe Biden speaks during an event to name his economic team at the Queen Theater on Dec. 1, 2020 in Wilmington, Delaware. - Alex Wong/Getty Images

Turkey’s Kurds have reacted with cautious optimism over the election victory of former Vice President Joe Biden, hoping that new administration policies might force Turkey to pursue a more reconciliatory approach toward the Kurds, following the Trump administration’s nonchalance toward Turkey’s ongoing heavy-handed campaigns against the Kurdish groups at home and in Syria.

Among the hopeful is Turkey’s pro-Kurdish Peoples' Democratic Party (HDP), the third-largest party in the Turkish parliament. The HDP has been the main target of President Recep Tayyip Erdogan’s government clampdown campaigns to quash political opposition in the country as hundreds of its members, including one of its top leaders, Selahattin Demirtas, have been imprisoned.

“[Erdogan] has to pay a price,” Biden told the editorial board of The New York Times in late 2019. “What I think we should be doing is taking a very different approach to him now. … Making it clear that we are in a position where we have a way which was working for a while to integrate the Kurdish population who wanted to participate in the process in their parliament.”

Biden also criticized Trump’s decision to withdraw US troops from northeast Syria, greenlighting Turkey’s military operation against the mainly Kurdish-led Syrian Democratic Forces (SDF) in October 2019, which dealt a massive blow to the Syrian Kurds’ territorial gains in the war-torn country. “The last thing I would’ve done is yielding to him with regard to the Kurds. The absolute last thing,” the former vice president said.

“That’s right, the United States wouldn’t have withdrawn its troops from [Ras al-Ain] if it was up to Biden,” the HDP lawmaker told Al-Monitor. “Not only out of his sympathy for the Kurds, but also because he is a man of the establishment and all of the American institutions were against the decision on the troops' withdrawal.”

Turkey sees the SDF — the major ally of the US-led coalition against the Islamic State (IS) — as an extension of the Kurdistan Workers Party (PKK), the armed group that has fought Ankara since 1984 and is considered a terrorist organization by most of the international community.

Yet this optimism has its limits. Many including Ozsoy believe that the Biden administration would not pave the way for an independent Kurdish state in Syria or Iraq.

It is unknown whether Biden’s support would translate into a sudden change in Erdogan’s policies vis-a-vis Kurdish groups at home, especially given the ruling party’s ongoing alliance with Nationalist Movement Party and other ultranationalist groups at home.

The ruling party’s now defunct peace initiative to solve Turkey's decades-old Kurdish problem through negotiations with the PKK had begun under Biden’s vice presidency, but unless this nationalist alliance dissolves a new peace initiative seems unlikely.

Still, Ozsoy believes that unlike Trump, Biden has the personal capacity to try and solve the Kurdish problem. This optimism manifested itself in the HDP’s congratulations message for Biden's victory.

Other Kurdish groups, meanwhile, have voiced skepticism that a new president at the White House would automatically spell a drastic shift in the US foreign policy.

“Given the nature of Turkey-US relations, it is not feasible to think that the United States will suddenly start backing the Kurds against Ankara,” Latif Epozdemir, leader of the Kurdish Rights and Freedom Party (HAK-PAR), told Al-Monitor.

“Some consider Biden a ‘new hope,’ but we don’t see it that way,” Epozdemir said, adding that expectations that the Biden administration would support the Kurds and other dissidents in Turkey are “unrealistic.”

Curiously, the Kurds find Kamala Harris to be more sympathetic than Biden because of her diverse background. “Kamala Harris gives more hope to me,” he noted.

He added that they would ask the new administration for their help to solve the Kurds’ problem in the region. “The Kurdish problem can no longer be ignored,” he said. “We will ask him to help the Kurds.”

Mustafa Ozcelik, leader of the Kurdistan Freedom Party (PAK) concurred that the Biden victory has spelled hope for the Kurds. Reminding Barzani’s description of Biden "as a friend of the Kurdistan nation," and the president-elect’s position on the Syrian Kurds, Ozcelik said that unlike Trump’s erratic policies, Biden projects stability.

Ozcelik said Ankara has to reset up the negotiation table and the PKK has to lay down arms in order to achieve a political settlement in Turkey’s decades-long Kurdish problem.

“Our expectation from the change is a new political dialogue between the Kurds and Turkey, with both the United States and United Nations taking initiative for a political solution,” Ozcelik told Al-Monitor. “We expect a new policy from the new president. We expect support from him for the peaceful solution to the Kurds’ problems.”

The regional developments might have an impact on the trajectory of the domestic policies in Turkey, according to Vahap Coskun, who is a professor of law at Dicle University in Turkey’s predominantly Kurdish province of Diyarbakir. Coskun believes war against the IS will be one of the top priorities of the new administration in the coming months.

Reminding that Washington considers the SDF an important actor in this war, Coskun thinks that the new administration is likely to establish closer ties with the Syrian Kurdish groups.

“The US administration has long sought policies aiming to establish a basic understanding between the Kurdish entity [in Syria] and Turkey,” Coskun told Al-Monitor. “Still, how a new political era assuaging security concerns both in Turkey and Syria can be built remains to be seen. … Unless a basic understanding is achieved on this matter, it is unlikely that Turkey’s domestic policies will see a drastic change.”

“It was the Syrian civil war that led to the collapse of the peace process,” Coskun said, adding that Turkey regarded Syrian Kurdish groups in Syria as a threat to its unity. Coskun argues that regional developments and dynamics have a better chance at reinstating democratic process in Turkey than domestic dynamics.

“A possible agreement [with the Syrian Kurds] would accelerate a change in Turkey's domestic policies,” Coskun concluded.