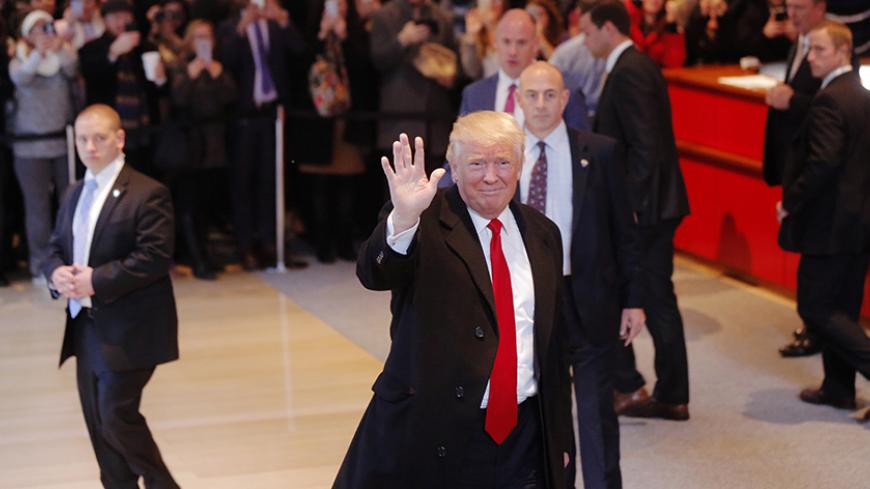 US President-elect Donald Trump waves to a crowd gathered in the lobby of The New York Times building after a meeting in New York, Nov. 22, 2016. - REUTERS/Lucas Jackson

Turkey’s Kurds are calling on US President-elect Donald Trump to follow up on the remarks he made in his July 21 interview with The New York Times: “It would be ideal if we could get them [Kurds and Turks] all together.”

What policy he plans to follow on Turkey-Kurdish relations is a matter of intense curiosity in the region.

For the moment, the only clue Turkey’s Kurds have to assess Trump’s intentions is what he said in that interview: “I’m a big fan of the Kurdish forces. At the same time, I think we have a potentially — we could have a potentially very successful relationship with Turkey. And it would be really wonderful if we could put them somehow both together.”

Which Kurds does Trump adore so much? No doubt, he is talking about the Syrian Kurds of the People’s Protection Units and the Women’s Protection Units, who fearlessly took on, with the support of the international coalition, the Islamic State (IS). What we don’t know is if Trump has the same sentiment about Turkey’s Kurds. There are undeniable links between the Kurdish movement in Turkey and the Syrian Kurds Trump admires. Naturally, this admiration will influence his attitude toward Turkey’s Kurds.

In the Times interview, when David Sanger asked Trump, “And what’s your diplomatic plan for doing that,” Trump gave a superficial response: “Meetings. If I ever have the opportunity to do it, meaning if I win, we will have meetings, we will have meetings very early on. … Very early on. I think it’s a natural. I think it’s a natural. I mean, we have two groups that are friendly and they are fighting each other. So if we could put them together, that would be something that would be possible to do, in my opinion.”

Hisyar Ozsoy, the deputy co-chair for foreign relations for the Peoples’ Democratic Party, said Kurdish leaders can’t yet predict the path Trump will take because his transition team is not yet finalized. “Of course we expect Trump to support freedom and democracy in the Middle East conflict. But if he continues with his pre-election stance of not giving priority to human rights, that would make us uncomfortable,” Ozsoy told Al-Monitor.

Gunes Murat Tezcur of the Kurdish Policy Studies program at the University of Central Florida said that although Trump declared that he will adopt a balanced attitude similar to Obama’s for relations between Turkey and Kurds in terms of Syria, Tezcur believes Trump won’t be focusing all that much on the Kurdish issue in Turkey. Tezcur added that he doesn’t expect Trump to spend much effort on Turkey, whose Kurdish policy has returned to a terror paradigm.

In the meanwhile, noting that the US is not in a position to turn its back on Turkey or the Kurds, “We expect Trump to actively try to fulfill his words of bringing [President Recep Tayyip] Erdogan and Kurds together,” Hisyar Ozsoy told Al-Monitor. “The US must persistently counsel Turkey not to treat the Kurds as an enemy, but as a partner. Kurds are not obsessed with Erdogan as a person. The problem is not only with Erdogan. There is a new ruling clique in Turkey, and the entire world must support those struggling against the mistakes of this bloc.”

Vahap Coskun of Dicle University thinks the Justice and Development Party (AKP) believes Trump will not be paying much attention to violations of human rights in Turkey. So how can Trump watch out for Turkey’s sensitivities while supporting the Democratic Union Party (PYD), which Turkey sees as a terror organization, at the same time? “Trump will want to succeed in Mosul and Raqqa in a short time. This goal may compel Trump to launch initiatives to end the conflict between his two field allies, the PYD and Turkey,” Coskun told Al-Monitor.

So what do Kurds expect from Trump? Coskun replied, “Some Kurds think Trump’s business acumen could be an opportunity and he could terminate the problems between Turkey and the Kurds. Other Kurds, however, think Trump’s political inexperience could make matters worse. Of course, Kurds in general hope the US will be more generous with its support to preserve Kurdish gains in Syria. Similarly, if an independence issue arises in Iraqi Kurdistan, we expect the US to support it also.”

Kurdish businessman Sahismail Bedirhanoglu agreed with Coskun’s assessments. The Kurds expect Trump to intervene to put an end to clashes in Turkey that are getting out of control, he said.

“We are asking Trump to take action to achieve peace between Erdogan and the Kurds. But unless Washington’s own relations with Turkey don’t improve, there will be less likelihood of Trump's putting pressure on the AKP to solve the Kurdish issue,” Bedirhanoglu told Al-Monitor.

Bedirhanoglu has been involved in many initiatives to solve the Kurdish issue and believes the balancing act of the United States between the Kurds and Turkey cannot be sustained under current conditions. “The US is trying to keep Turkey, Kurds and Arabs happy all at the same time. Kurds are involved in the struggle against IS. Turkey is also in that struggle, but they are not allies. This is a very important dilemma that the US has to overcome. Trump cannot decide to be friends with one of the actors in the field while opposing the other. It is essential to end strife between these two actors,” he added.

Bedirhanoglu said Erdogan and the AKP cannot keep up their current policy against the Kurdish movement. The same is true for the Kurdish movement’s stance against the Turkish state. It is easier to end a war that will not have a winner: “As both sides cannot sustain this war, a US move to end the conflict may get positive responses both from the Kurds and Turkey,” Bedirhanoglu said.

Bedirhanoglu believes the only way Turkey can restore its image in the West is through a dialogue with the Kurds. A new peace process could, therefore, be a major public relations gain for Turkey in the West, and Erdogan is well aware of it.

However, while addressing the Nov. 23 meeting in Istanbul of the Organization of Islamic Cooperation Committee for Economic and Commercial Cooperation, Erdogan made it clear that he is not that interested in such public relations when he said, “If the West calls someone a dictator, in my book that person is the right person.”

Ozsoy thinks Erdogan’s current policies will inevitably mean a confrontation with Trump. “Trump could opt to improve ties with Turkey in the first few months of his term. They may even have a fake honeymoon. But the Middle East policies of Turkey and the US contradict each other. This is not an issue that can be solved with a few good meetings between the leaders. Turkey’s interventions in Iraq and Syria and its flirting with Sunnis are bottlenecks in the US Middle East policy. These bottlenecks will not disappear because Trump has taken over,” Ozsoy said.

The letter said, “Mr. President: We are in the 21st century and Kurdish people are still devoid of their freedom and rights. More than 50 million Kurds spread over 600 square kilometers in the Middle East are still without a state, living as captives of occupying states. We Kurds hope that you as the President of the United States will support oppressed and victimized people.”

We don’t know if Trump has seen this letter. But people of diverse opinions and tendencies whom we spoke with agree that the path Trump takes will determine whether Turkey’s anti-Kurdish policies will change.