Some experts think Erdogan's threat to send troops into northeast Syria is a trial balloon that has more to do with Turkey's March 31 local elections than anything else, but others take his statements more seriously. 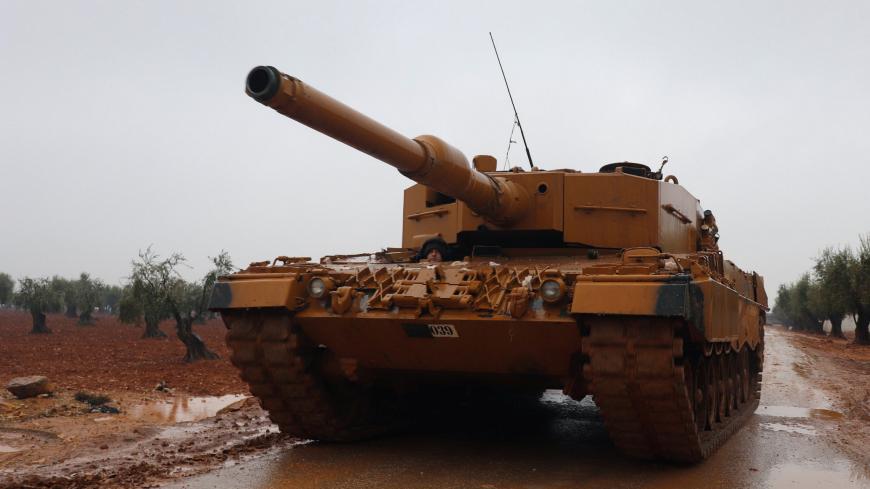 ANKARA, Turkey — President Recep Tayyip Erdogan’s announcement that Turkish soldiers would march into northeast Syria “within a few days” has provoked varied reactions, with conservatives cheering the move and liberals calling it a gimmick to gain votes ahead of elections.

“We will start the operation to clear the east of the Euphrates from separatist terrorists in a few days,” Erdogan told a conference of arms manufacturers in the capital Tuesday. He said Turkish forces would not attack the US military, which has some 2,000 troops in Syria.

But he poured scorn on US support for the Syrian Kurdish militia, the People’s Protection Units (YPG), which Washington regards as an important ally in the battle against militants of the Islamic State (IS). The YPG is a sister organization of the Kurdistan Workers Party, a Turkish insurgent group classified as terrorist by the United States and the European Union.

In a bid to protect its Syrian Kurdish allies, the US military in northeast Syria has conducted joint patrols with the Syrian Defense Forces, an umbrella group that consists largely of YPG fighters, and erected US-staffed observation towers along the Syrian-Turkish border.

“Our strategic partners (US) are cooperating with the extension of the PKK in Syria. We are saying they are terrorists, but they (US) deny it.” Erdogan said.

“We know that the aim of the radar and observation posts set up by the United States (east of the Euphrates) is not to protect our country from terrorists, but to protect the terrorists from Turkey.”

Erdogan dismissed the primary rationale for the US presence in Syria — the battle against remnants of the IS, whose Arabic acronym is DAESH, which is now concentrated in the eastern Deir ez-Zor region.

“There is no threat of DAESH anymore. It is a fantasy,” Erdogan said. “(President Donald) Trump said there is a 150-kilometer-long strip of territory that is under the control of DAESH, and he said, ‘We will clean this area.’ I told him, 'We can do it if you allow us. There is no need for terrorists to do that.'”

The most curious facet of his speech was that he was telling the YPG in advance that he was going to attack it. “If you want to do something like that, you have to do it suddenly without announcement,” Hasan Koni, a professor of international law at Istanbul Kultur University, told Al-Monitor.

This suggested that Erdogan was testing the waters of international opinion, wanting to see how strongly the world would react.

“If (the United States) doesn’t let it happen, it doesn’t happen,” said opposition legislator Hisyar Ozsoy, deputy chairman of the Peoples’ Democratic Party, the pro-Kurdish and third-biggest party in Turkey.

Ozsoy called on Washington to stop a Turkish incursion into Syria, saying it would violate international law and “totally destroy the stability” of northeast Syria.

Kurds are the majority ethnic group in the northeast. Since the Syrian government withdrew most of its forces in 2012, the Kurds have managed to keep order in the area, known for the main cities of Hasakah and Qamishli, despite the turmoil of the civil war. Western journalists and aid workers can visit Hasakah and Qamishli without fear of being kidnapped.

But the very success of the Kurds in Hasakah and Qamishli has made Turkey fear the area is becoming a second northern Iraq, where the Kurds have established an internationally recognized autonomous zone. Ankara knows that upgrading the status of Syrian Kurds will embolden Turkish Kurds.

What accelerated Erdogan’s decision to intervene was last week’s statement by the chairman of the US Joint Chiefs of Staff, Gen. Joseph Dunford, that the United States would train and equip 35,000 to 40,000 members of the Syrian Democratic Forces “to provide stability,” said Muharrem Sarikaya, a columnist for the pro-government newspaper HaberTurk.

A conservative academic, Ragip Kutay Karaca of Istanbul Aydin University, endorsed Erdogan’s move, saying, “Dunford said they would train 40,000 people. Who are those people? They are members of the YPG.

“For Turkey this is a survival issue,” Karaca told CNN Turk.

But liberals said Erdogan is trying to divert attention away from the poor state of the economy, where unemployment is over 11%, inflation is 22% and the IMF says growth will be 0.4% next year. Turkey holds municipal elections March 31.

“Erdogan is in need of garnering the support of nationalist voters,” said Murat Ozcelik, a former Turkish ambassador to Iraq and special envoy to Iraq’s Kurdish region.

Ozcelik told Al-Monitor that he saw Erdogan’s announcement as “a gimmick more for domestic use rather than a real invasion.”

“I don’t think he will be able to do a major operation while US soldiers are there,” he said. “The best he can do is some attacks.”

Pointing to the announcement’s effect on the exchange rate, where the Turkish lira slightly strengthened against the US dollar Tuesday, closing at 5.36, Ozcelik added: “Even the markets didn’t buy it.”

However, HDP legislator Ozsoy said Erdogan should be taken seriously.

“He’s not bluffing,” Ozsoy told Al-Monitor. “If there’s no strong (world) reaction, he could do it.”

Ozsoy said this would not be the first time Erdogan begins an election campaign with a military operation. His campaign for the presidential elections in June began with his sending troops into northwest Syria in January, Ozsoy said.

In that operation, Turkish troops and their allies, the Free Syrian Army, an Arab force, drove YPG forces out of the Afrin region. The Pentagon criticized the operation as a distraction from the fight against the Islamic State group.

Ozsoy, who represents the Kurdish capital of Turkey, Diyarbakir, in parliament, said none of the country’s 12 million Kurds would support Turkish forces going into Hasakah and Qamishli.

“The problem is that even expressing your ideas, criticizing any kind of military operation, is equated with supporting terrorism,” Ozsoy said. He recalled the government’s crackdown on dissent during the Afrin operation when people posting even mild comments on social media were arrested.

Koni said Washington could bring pressure to bear so that Erdogan calls off his planned incursion. And it would be in Washington’s interests to do so: “Otherwise, in the future, it won't be able find any friends any more. It won't be trusted anymore. People will say (the United States) uses us and leaves us.”