How will Turkey gain power abroad when it can't protect its borders?

Turkey's ineffectiveness in protecting the city of Kilis on the Syrian border points to how unlikely it is that the government will fulfill its ambition to become a regional power. 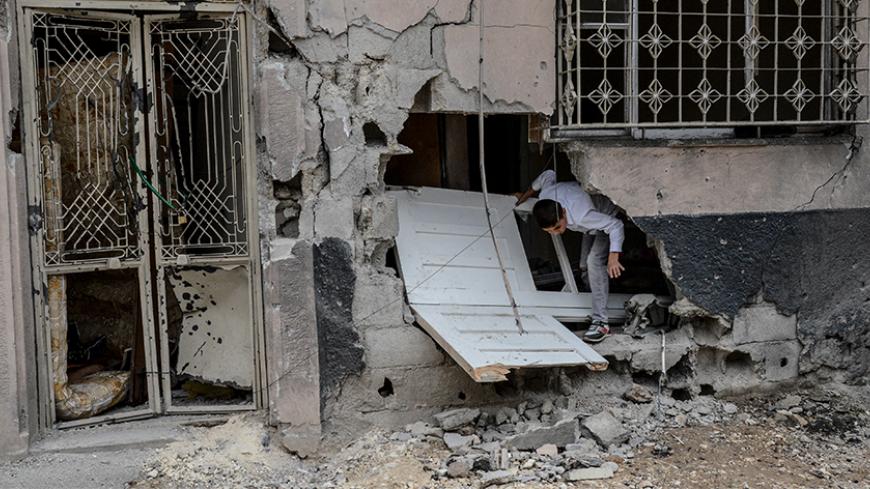 A boy leaves a damaged house days after rockets hit the border town of Kilis, Turkey, May 7, 2016. - ILYAS AKENGIN/AFP/Getty Images

Turkish President Recep Tayyip Erdogan is very effective and convincing when it comes to intimidating dissenters in Turkey or bullying the European Union. But so far his words have carried no weight in tackling the Islamic State (IS) next door.

Since January, IS has been raining missiles down on Kilis, a Turkish city on the border with northern Syria. The assaults have taken the lives of 21 people, including eight Syrian refugees, and wounded scores of others. Many buildings have been devastated. The people mostly remain indoors, day and night.

"The war in Syria has gradually metastasized into Turkey in recent years, and few places have transformed as greatly as Kilis, a cozy town once known mostly for its baklava and kebabs," wrote the International Business Times. "Everyday life in the town has come to a standstill as anger against both the government and refugees has begun to boil over."

Kilis is only 3 miles from the Syrian border, which is controlled by IS operating from the nearby town of al-Bab. While the Turkish inhabitants of Kilis (predominantly of Turkmen background) are taking refuge in the hinterland of the province, the town and its environs are flooded with Syrian refugees who left their homes in settlements as far south as Aleppo. Estimates vary widely, but it appears that roughly 110,000 Syrian refugees now outnumber the town's Turkish population, which has dropped to between 70,000 and 90,000.

Erdogan said last week that Turkey would keep responding to rocket fire coming from Syria. "We have never left any attack on Turkish lands and citizens unanswered and we will never leave it unanswered," he said. "[IS] suffered great losses because of its attacks on Kilis. If they continue, they will suffer greater losses."

Whether IS really is suffering remains to be seen. Although the Turkish army pounds the other side of the border with howitzers, IS fighters drive close to the border with pickup truck-mounted Katyusha rocket launchers, fire them on Kilis, then drive away and disappear. It's incredibly hard to hit moving targets using howitzers.

Meanwhile, Turkey cannot resort to airstrikes because it fears a confrontation with Russian air power. Turkey's downing of a Russian fighter jet Nov. 24 has limited its freedom of action in the region north of Aleppo, even though the attacks on Kilis threaten the safety of Turkish citizens.

Turkish Prime Minister Ahmet Davutoglu, who is set to resign later this month, said May 4 that Turkey was ready to send ground troops into Syria to combat IS militants. However, the lame-duck prime minister's bluster against IS is not taken seriously, since he can't even keep his seat.

A BBC report reflects the disbelieving mood in Kilis: "'Is Kilis not within the borders of Turkey?' asks Veysel Evran, whose 63-year-old mother was killed in an attack last month. 'The government always says Turkey is powerful, the Turkish army is powerful. So where are they? The president has forgotten all about Kilis.'"

The Republican People's Party (CHP), the main opposition party, is trying to capitalize on the government's dilemma. On May 10, CHP leader Kemal Kilicdaroglu lambasted Erdogan, saying, "If Kilis would be rubble, [Erdogan] would not mind. Schools in Kilis have been closed for four months. Where will mothers send their children? There has been no state government for four months [in Kilis]. The residents of Kilis say they have become refugees in their own homeland."

Kilis residents have found ingenious ways to protest the ineffectiveness of the government and the indifference of people in the western parts of Turkey. For example, on May 8, millions of people were watching a Sunday night televised championship soccer game between Galatasaray and Besiktas, two popular Istanbul teams. At the 76th minute (Kilis' license plate prefix is 76), a spectator jumped onto the field. At that moment, Besiktas scored its winning goal and TV cameras displayed the intruder's T-shirt, which read, "For Kilis, we are mourning!" He was a passionate Galatasaray fan, a father of three, who tried to attract attention to his hometown's plight.

The government's inability to punish IS for attacking one of Turkey's provincial centers inevitably brings to mind how Israel responded to rockets pouring on its border settlements.

In the early 1980s, PLO-affiliated groups launched rocket attacks on Israel's northernmost town, Kiryat Shmona. After 1984, Hezbollah followed suit. Hezbollah's attacks led to one of Israel's largest military actions against Lebanon in 1996, the notorious Operation Grapes of Wrath. From the outbreak of the second intifada (in September 2000) through March 2013, about 9,750 rockets and 5,000 mortar shells were fired from the Gaza Strip into Israel's border settlement Sderot and the towns of Ashdod and Ashkelon.

The rocket attacks alternated with Israeli military actions. From 2004 until 2014, Israel responded with eight large-scale military operations, including one in 2009 in which Israel had full air supremacy.

Kilis is not a small city like Sderot. When Turkey's response is compared with that of Israel, despite the apparent difference in circumstances and the period, it is a manifestation of the incompetence of a country whose leader claims regional power and leadership.

Ending the IS attacks on Kilis may require creating a buffer zone in Syrian territory and pushing IS away. The situation calls for a ground force to be deployed, and it is difficult to imagine how Turkey could make headway without American cooperation and tacit Russian endorsement.

But with Erdogan ostensibly at odds with Washington and an unforgiving Moscow, how that would ever be possible remains to be seen.

Kilis is a clear testimony to Turkey's powerlessness in its ambition to be recognized as a regional power.