Will Turkey ask NATO for help defending against IS rockets?

Turkish citizens are calling on their government to boost its feeble response to IS shelling from Syria. 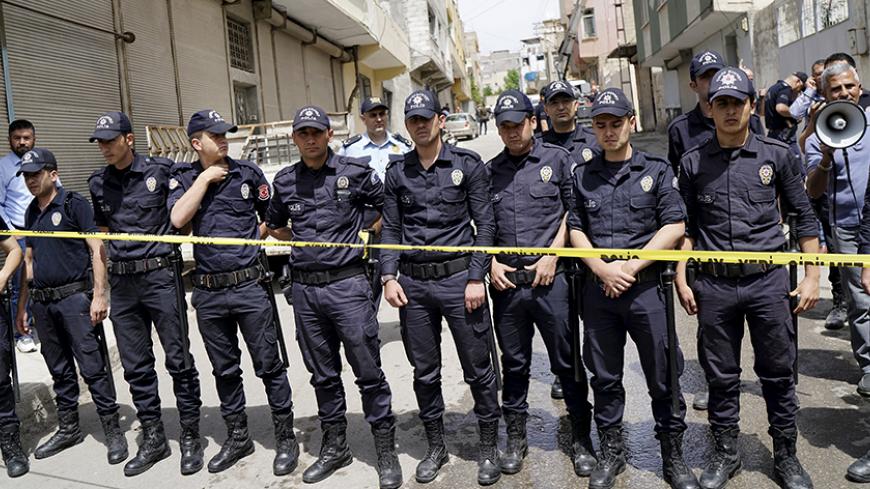 Police secure the scene after two rockets hit the Turkish town of Kilis near the Syrian border, April 24, 2016. - REUTERS/Umit Bektas

Kilis, with 130,000 inhabitants, is the Turkish town closest to the northern Syria region controlled by the Islamic State (IS). In Kilis, which hosts more Syrian refugees than its own population, 17 people have been killed and 62 wounded since January by rockets fired from Katyusha multiple-rocket launchers from Syria. The latest fatality was April 24.

Daily life in Kilis is now at a standstill because of the unpredictable attacks. Economic and educational activities have halted, albeit unofficially.

The people of Kilis are upset with continuing rocket attacks that have paralyzed their lives — and with what they see as the government’s nonchalant response. After the latest attack, inhabitants marched in the streets to demand that the governor resign and to protest the government's perceived passivity.

Ankara is having trouble explaining the rocket attacks, primarily because it is not used to them. Presidential spokesman Ibrahim Kalin said the attacks could have been made by mistake. Asked whether the attacks suggest weak security, Kalin said, “There is chaos in Syria.” He added that there is no firm information that the attacks were intentional.

According to daily Hurriyet writer Abdulkadir Selvi, after the April 24 attack Ankara asked the United States to send its Incirlik-based A-10 Warthogs to hit the IS positions firing at Kilis. The old Warthogs, still the most favored air-to-ground attackers, destroyed the IS targets.

Stung by unusually heavy media questioning and angry public reactions to what is seen as a feeble military response by a major military force to a group of militiamen, Turkish military sources said that in the past 3½ months, they have fired 5,330 artillery rounds at IS positions. Sources claimed the rounds killed 370 IS militants.

Nevertheless, these responses are not sufficient for Turkey, which is just beginning to cope with the Katyusha threat. Katyusha calibers range from 107 mm to 122 mm. The rockets, developed by the Soviet Union during World War II, are still widely used because they are cheap, easy to use and have long ranges.

According to Arda Mevlutoglu, a military technology consultant, there are several reasons why terror organizations prefer Katyusha rockets to conventional artillery: The rockets can be assembled, mounted on trucks and fired quickly, saturating an area with fire and disappearing before the enemy hits back. “These Katyushas are easier and cheaper to manufacture and use. Many organizations such as IS and Hezbollah manufacture them in their own workshops,” Mevlutoglu said.

He added that it is expensive and difficult to defend against the weapons.

“Katyushas do not offer enough time for the enemy to retaliate quickly because they can be fired from short distances without detection," he said. “Civilian-type pickups and trucks carrying Katyusha launchers are quick to change locations after firing and conceal themselves much better than military-type transport. An effective counterattack is not easy.”

This is why Patriots and similar air defense systems developed for use against classic ballistic missile threats are not effective against Katyushas. Israel has been working on systems to counter the rockets; its Iron Dome is one example. There is also work going on to adapt high-energy laser systems to shoot down Katyushas in flight. But a former United Nations official who has observed Katyushas in action for years from Lebanon to Israel says no system has been developed yet that can shoot down the 40 rockets that can be fired simultaneously from a single truck-mounted launcher.

For Mevlutoglu, the most effective way of preventing Katyusha attacks is a strong reconnaissance-surveillance and intelligence system to detect and destroy them before they are fired.

These attacks are dragging Turkey inside Syria. The Turkish army has moved its own multiple rocket launchers to the Kilis area, while sources in the government are increasingly referring to the option of carving out a 30-kilometer zone south of Kilis that would be secured by the Turkish army to put an end to Katyusha attacks. This would require immense efforts by Turkey’s national intelligence service MIT to persuade its Syrian allies and US officials. Another option that is much discussed is to reinforce the Turkish 155 mm howitzers with the US-made High Mobility Artillery Rocket System (HIMARS). Some observers expect that in coming months HIMARS batteries with a range of 90 kilometers (56 miles) will be deployed on the Turkish border.

Rockets that used to land in empty fields around Kilis are now hitting the town's center. In the April 24 attack, one rocket hit about 100 yards from the governor’s office, striking a mosque in the town's center and indicating increasing accuracy. Intelligence reports reaching Ankara say IS is aware of Turkey's reluctance to use its air force over Syria because of potential Russian payback for one of its jets that Turkey downed in November. That is why IS mounts its launchers on pickup trucks, moves about freely, fires and immediately disappears before Turkish artillery can pinpoint them.

Meanwhile, there are discussions on how to prevent the Katyusha attacks from the air. Ismail Demir, undersecretary for the defense industry, says the most effective measure against Katyushas is to deploy armed unmanned aerial vehicles (UAVs) to monitor the area, detect the threat and react immediately. That, of course, means Turkey urgently needs its own armed UAVs.

There are reports in Ankara that Turkey has asked the United States to beef up its air defense of Kilis. If the United States agrees, then we are likely to see the four Predator UAVs armed with Hellfire missiles that are currently stationed at Incirlik Air Base in action against IS targets.

There are also unconfirmed but persistent rumors in Ankara that Turkey may get Russia's blessing to fly over Syria.

If the situation continues, Turkey may ask NATO to implement its collective defense policy, which states that an attack against one NATO member constitutes an attack on all members.

“Turkey, which has been a member of NATO since 1952, is under deliberate armed attack from outside of its borders, which unequivocally calls for invoking the Article 5 commitments of its allies," said Mustafa Kibaroglu, chairman of the international relations department at MEF University in Istanbul.

“Should IS continue to fire rockets from within Syria targeting Turkish towns and killing Turkish citizens, it will be extremely difficult for the government to stand still and simply watch the situation, as public discontent will grow excessively and that may force the authorities to take unilateral action and launch a military operation into Syrian territory — which may very well result in a confrontation with Russian units,” Kibaroglu said.

“For such a risky scenario not to become a reality, NATO must take swift action by, first of all, deploying proper air-defense systems in Turkey again and then launching air raids, if and when necessary, to destroy highly mobile IS rocket launch pads. I think that despite some rhetorical statements to the contrary, Russians cannot dare to confront NATO assets whose targets will be clearly IS. If NATO cannot deliver even this much under these circumstances, how can one convince Turks that the assurances provided by the alliance to its members can be trusted against much bigger threats on the horizon?”

In the coming days, what happens at Kilis and how the town and its people are defended will be a test for the Turkish government and its armed forces in appeasing the nation, and will measure the sincerity of the United States and NATO toward Turkey.