In Syria, a Saudi jihadi is becoming a paramount figure for militants opposed to President Bashar al-Assad — but will he become the "new bin Laden"? 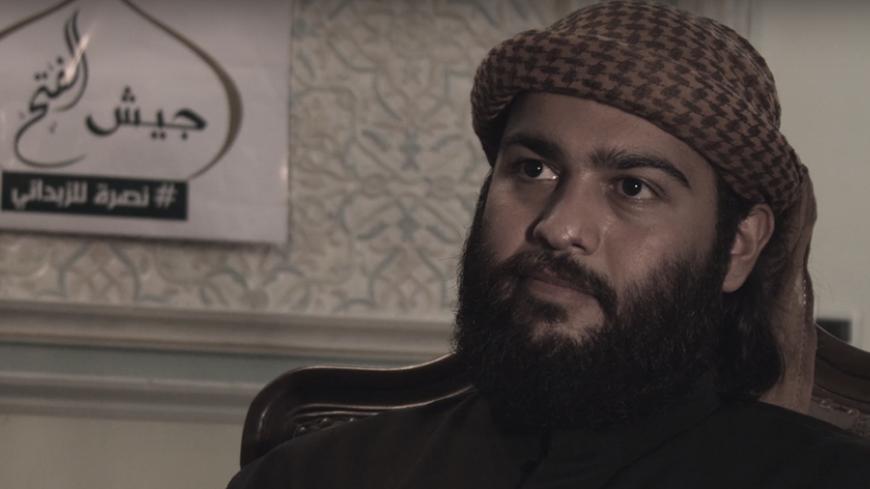 Abdullah al-Muhaysini is pictured during an interview with Naim Cherni, the Swiss Islamic Central Council's person in charge of cultural productions and film, Nov. 20, 2015. - YOUTUBE/IZRS

On April 24, 2013, Saudi national Omar al-Muhaysini  was killed in Deir ez-Zor in eastern Syria, alongside his fellow countryman Abdul Aziz al-Othman, aka Abu Omar al-Jazrawi, who is said to be the first Saudi national to join al-Qaeda-affiliated Jabhat al-Nusra. Muhaysini, the younger brother of Sheikh Mohammad al-Muhaysini, a leading Saudi cleric and the former head of the country’s powerful Committee for the Promotion of Virtue and the Prevention of Vice, was allegedly assassinated by the Islamic State (IS) along with Jazrawi.

A few months later, Omar Muhaysini’s nephew Abdullah Muhaysini, a renowned young cleric, announced that he was headed to Syria, leaving behind his family in Mecca. The nephew said he came to Syria to bridge the gap between IS and other factions. In an interview with the Swiss Islamic Central Council, he said, “I was an admirer of al-Qaeda in Iraq and the Islamic State of Iraq, and I thought they were victims of lies.” He said he decided to travel to Syria despite the travel ban imposed on him by the Saudi authorities. “They impose travel bans to prevent those who support the mujahedeen on the path of Allah from going to Syria.”

Since the beginning of the Syrian revolution, Muhaysini has taken part in several campaigns aimed at raising funds to help jihadi groups and victims of the war. His sermons in Mecca were dedicated partially to Syria. Yet it might be that the death of his young uncle was a main reason behind his decision to migrate to Syria to join the fight there.

In Syria, Muhaysini presented himself as a mediator between factions. He asked to meet IS leader Abu Bakr al-Baghdadi, but was granted permission instead to meet the caliph’s (now deceased) No. 2, Abu Ali al-Anbari. Muhaysini suggested that differences between the factions that are fighting to topple Syria’s President Bashar al-Assad should have a religious court to rule among them so that they won’t fight each other. In a few months, Muhaysini took sides and became hostile to IS and sided with Jabhat al-Nusra and its allies — yet he was conscious about not calling himself a member of any faction. He started appearing in videos calling on Muslims to join the fight against the Syrian government at a time when his opponents started questioning the real role he was playing in Syria, with his launching a war of words on IS as well as other factions.

It was not until March 2015 that the young Saudi preacher found himself a suitable position in the hierarchy of the Syrian revolution’s factions. He founded Jaish al-Fatah, or the Army of Conquest, that brought together around nine factions, including Jabhat al-Nusra. Muhaysini became the general judge of the new coalition that fought several decisive battles in Idlib, Aleppo, Hama, Daraa, Quneitra and Qalamoun, appearing in several videos from the field, giving fiery speeches and taking part in the battles, such as in Tel al-Ais where he was injured for the fourth time since his arrival in Syria. His popularity was growing to the extent that an Iranian official told Al-Monitor for an April article, “I can see a new bin Laden being created. He’s also Saudi, and he’s now being treated as a rebel: Abdullah al-Muhaysini. It’s really strange how history repeats itself.”

It might be true that there are some similarities between the former slain al-Qaeda leader and Muhaysini: both are Saudis, both come from rich families that work in construction — Muhaysini’s family owns a construction company that’s worth 500 million riyals ($133 million) — and both founded an umbrella group for multinational jihadis fighting in a country away from their own. Yet the era of bin Laden isn’t the same as that of Muhaysini. Moreover, the legacy of bin Laden isn’t easily inherited. Bin Laden’s war against the Soviet Union is different from Muhaysini’s war against the Syrian regime. The same applies to the status of jihad back when bin Laden was one of few jihadi leaders, while Muhaysini is one among many. According to Abdullah bin Mohammed, an al-Qaeda theorist, Muhaysini today isn’t the same man who moved to Syria three years ago. “He supported the Syrian revolution and made some political mistakes, yet he learned a lot from the Syrians and took into consideration their advice.” Bin Mohammed told Al-Monitor that he considers Muhaysini as one of the accepted figures among the Islamic factions. “He’s always present when it comes to arbitration. He’s independent, though there are some who believe he’s with al-Qaeda, and they have a point in that,” the theorist explained. “I see his path taking him to incorporate himself with the revolution’s culture year after year, the acceptance of others, coexistence, and I think this will lead to the rethinking of many issues, mainly giving up the holiness they surround themselves with.”

Bin Mohammed’s point of view differs from that of Moussa al-Ghannami, a Saudi preacher who was Muhaysini’s acquaintance. Ghannami wrote on Twitter, “The leaders of the two wings of al-Qaeda were racing to sit with him, some calling him the [Abdullah] Azzam of Syria, and others the new [Osama] bin Laden, he’s a limitless credit card.” Ghannami accused Muhaysini of taking the side of Jabhat al-Nusra and mobilizing many young men for al-Qaeda. Ghannami said Muhaysini then “stopped mobilizing after the disasters he caused in Syria and started working on support campaigns for al-Qaeda and its operations rooms. During the Ghouta crisis he launched a campaign for [financial] support. I asked our brothers there and they said they didn’t receive a penny.” Others tweeted with the question, “What’s Muhaysini’s real goal in Syria?” Some accused him of being a puppet of spy agencies, and others of inciting hatred among militants.

Al-Monitor asked an Iranian official about Muhaysini and how Iran sees him. He told Al-Monitor on condition of anonymity, “Muhaysini is serving the Saudi intelligence’s agenda. He’s today the man in control on the ground even if he says things against Saudi Arabia; his family is there, his children, he’s a Saudi Trojan [horse] in the body of the terrorists, mainly those among them who don’t answer [to] the Saudis’ policy.”

Despite the aforementioned points of view, it’s obvious that Muhaysini has become a real factor in the Syrian equation — whether he’s a jihadist wonder boy, a new bin Laden or a Saudi Trojan horse, the fact is that he’s in the limelight for anyone interested in Syria, not to mention that he was addressed by al-Qaeda leader Ayman al-Zawahri in an open letter in 2014 answering questions raised by him and other pro al-Qaeda figures.