Iranian official says Nusra, not IS, main threat to West

The tug of war in Syria will grind on as political talks appear to be going nowhere. 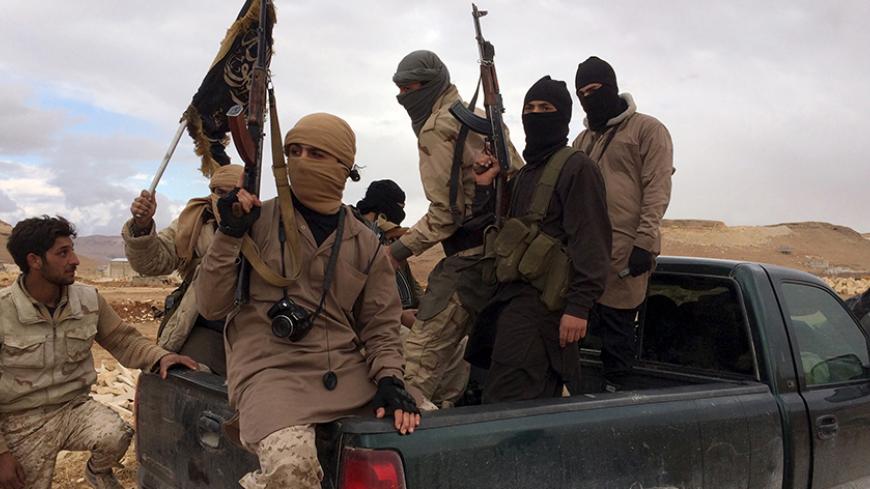 Al-Qaeda-linked Jabhat al-Nusra fighters carry their weapons on the back of a pickup truck during the release of Lebanese soldiers and policemen in Arsal, eastern Bekaa Valley, Dec. 1, 2015. - REUTERS/Stringer

From one edge of the abyss to another, warring rivals in Syria continue to swap roles. On March 27, Palmyra was recaptured from the Islamic State (IS) by the Syrian army, Iran’s Islamic Revolutionary Guards Corps and Lebanon’s Hezbollah movement. After IS had held the city for almost 10 months, forces loyal to the Syrian government entered the city under aerial cover from Russian fighter jets, which launched 41 sorties in four days, killing scores of IS fighters.

After this victory, pro-regime jubilation reflected a sense of total triumph. Expectations were so high that media outlets close to this bloc suggested Deir ez-Zor would be the next city on the liberation list. The anti-IS forces are taking advantage of the truce between the regime and rebels that took effect Feb. 26, which has helped to keep all fronts relatively calm except those with IS and Jabhat al-Nusra.

The Palmyra military advancement, along with political talks, would have been the ideal scenario for the regime were it not for the April 2 attack on Tel al-Ais. Jabhat al-Nusra recaptured the strategic city, leaving scores of Syrian army soldiers and Hezbollah fighters dead. This was followed days later by the downing of a Syrian fighter jet in the same area. The aircraft’s pilot was captured. On April 12, Syrian, Iranian and Hezbollah fighters attempted once again to seize Tel al-Ais, but their attack was repelled. Several fighters from Hezbollah were killed and one was captured, bringing the number of Hezbollah members held as prisoners of war by Jabhat al-Nusra to four.

None of the warring actors in Syria is capable of ending the war — despite all claims to the contrary by various sides. The pro-regime bloc can advance on one front, but that has implications on another front. Moreover, if the Russian air force isn’t providing cover, rival forces on the ground are almost equal in power.

It’s no secret that the Syrian army is exhausted, despite the initial boost in morale after Russia entered the war. Such a boost alone is not enough to win the war in Syria — especially since Russia is withdrawing some of its forces. Iranian military advisers, along with Hezbollah, Iraqi and Afghan fighters, are adding power to the regime’s military capabilities. However, these forces aren’t efficient when it comes to “post-victory” redeployments, as such missions always depend on the strength of local forces, which must be able to solidify recaptured positions.

Hezbollah, despite its limited manpower on the eastern borders of Lebanon, recently started increasing its presence on the southern front — on the border with Israel — to be prepared for any “Israeli adventure.” Yet the group’s leader, Hassan Nasrallah, played down the possibility of war with Israel in a March 21 interview with pan-Arab news network Al-Mayadeen. Nonetheless, a political source close to Hezbollah in Beirut told Al-Monitor on condition of anonymity, “Israel might at any minute launch a ‘mini war’ that might lead to an unprecedented crisis in the region. Hezbollah is taking this into consideration and therefore is taking all measures to be able to respond and defend [itself] whenever needed.”

On the other side of the Syrian conflict, the situation is no better. Opposition forces are doing what the pro-regime forces are not: killing each other. It's no longer possible to even count the number of groups fighting to topple Syrian President Bashar al-Assad. Even as these groups share a common main goal, they differ on other objectives and ideology. The objectives of their financiers also are causing conflict among the groups.

A March 27 Los Angeles Times story vividly outlined the problem under the headline “In Syria, militias armed by the Pentagon fight those armed by the CIA.” The article laid bare how “a CIA-armed militia called Fursan al Haq, or Knights of Righteousness, was run out of the town of Marea, about 20 miles north of Aleppo, by Pentagon-backed Syrian Democratic Forces moving in from Kurdish-controlled areas to the east.” This is not to mention the clashes taking place between groups financed by Saudi Arabia, Qatar and Turkey — all in parallel with the larger war with IS, which has taken its toll on the rebels.

As the situation is dangling between the US- and Russian-backed Geneva peace process — which doesn’t seem to be going anywhere — and the stalemate on the ground, an Iranian official expressed skepticism in an interview with Al-Monitor that any serious developments will be made in the coming months. He told Al-Monitor on condition of anonymity, “It’s clear that the current administration in Washington is trying to keep the situation under control in the region so that the next elected administration can make decisions. The next president is the one who will have to live with the decisions for another four years, so they want the newcomer to make them.”

The Iranian official added, “It has been five years since the war in Syria started. We don’t have a plan B — we only have one plan, and we’ll continue to work in accordance with it. We want a political solution and unity against terrorism. This isn’t going to change as long as the crisis is going on. The bloodshed should end, but the US doesn’t care: They see their interests only because their hands aren’t in the fire, but this is not going to last too long. Daesh [IS] is everywhere, and for sure, they are in the United States.”

He concluded ominously, “In fact, the real danger for the US, and the West in general, isn’t Daesh but [Jabhat al-] Nusra. I can see a new [Osama] bin Laden being created. He’s also Saudi, and he’s now being treated as a rebel: [Saudi militant cleric] Abdullah al-Muhaysini. It’s really strange how history repeats itself.”