Why are some Palestinians upset over Nakba commemoration?

The organizers of this year's Nakba commemorations faced harsh criticism for their celebratory events on what is typically a solemn occasion. 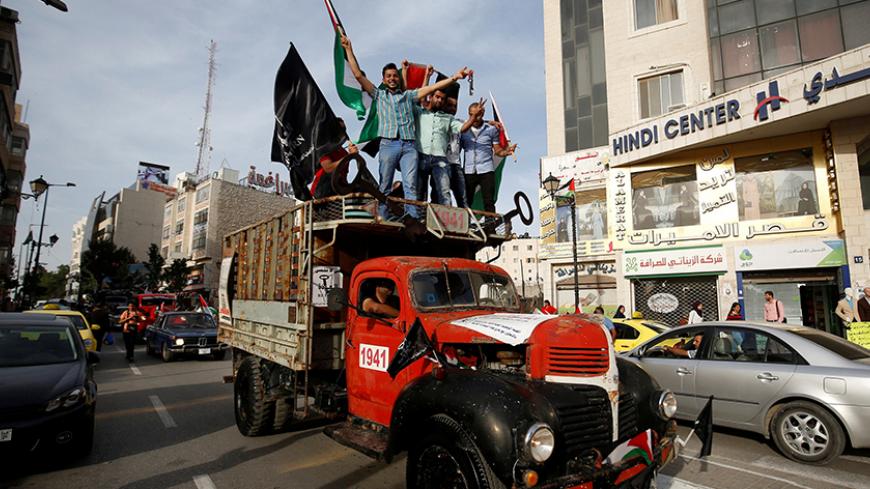 Palestinians ride atop a truck during a rally marking the 68th anniversary of the Nakba in the West Bank city of Ramallah, May 15, 2016. - REUTERS/Mohamad Torokman

RAMALLAH, West Bank — Over social media, Palestinian activists have criticized some events held for the 68th anniversary of the Nakba, the Palestinian exodus, commemorated on May 15 each year.

The central festival held in Ramallah on May 17, called for by the Supreme National Committee to Commemorate Nakba Day, faced a lot of criticism, as it included performances by local dabke dancers and singer Mohammed Assaf, during which hats made in Israel were distributed to the attendees.

The Ramallah festival happened two days after the Palestinian Embassy in Qatar held a Nakba Day commemoration, during which Qatar unveiled the world's largest key, a symbol of Palestinian hopes to return. The key entered the Guinness Book of World Records on May 15.

In this context, Al Jazeera correspondent Mirvat Sadeq posted on Facebook May 14, “The Nakba was not a matter of folklore. You cannot commemorate it with dabke dancing and folk songs. It was not a wedding where women wear embroidered dresses. The Nakba is not a celebration. It is a disaster and a continuous massacre against people and lands. Tragedies are not to be celebrated with horns and sirens.” Sadeq was referring to the alarm siren that the commemoration committee played for 68 seconds at noon on May 15 in Ramallah to signal the launching of the Nakba events.

Caricaturist Mohammad Sabaaneh posted on Facebook May 15, “Some people are commemorating the Nakba in front of the UNRWA [United Nations Relief and Works Agency for Palestine Refugees] offices in Lebanon, while others are selling tickets, dancing, singing and making money. Some people are living in bliss under the Israeli occupation, while others are rotting in the darkness of their prison cells.”

Sabaaneh also posted a caricature showing a Palestinian official in uniform holding a banner reading “Right of Return … to Negotiations.”

Amid the public outrage, the Popular Front for the Liberation of Palestine (PFLP) boycotted the celebration in Ramallah because it was a “festive occasion without a program of struggle against the catastrophe committed against the Palestinian people.”

Omar Chehade, a member of the PFLP’s Central Council, told Al-Monitor, “The PFLP apologizes for not participating, as it felt a celebratory inclination for the commemoration during the preparatory discussion of the Supreme National Committee to Commemorate the Nakba Day a few weeks ago, instead of an occasion to confront Israel and push the intifada forward.” He added, “The central event was lame and did not result in a clear political stance that is in line with the Nakba’s struggle. The Nakba events that were organized reflect a consumerist pattern that is harmonious with the policies of the Palestinian Authority that neither benefit the refugees’ case nor counter settlements or deter the Israeli army.”

Chehade said, “It would have been better to commemorate the Nakba by escalating the intifada in its official and public dimensions and promoting the national dialogue instead of celebrating and running after the French initiative, which eliminates the right of return.”

Many writers, analysts and politicians expected that militants would take advantage of the Nakba commemoration to pour fuel on the uprising that has been raging since October in the Palestinian territories and has been marked by public confrontation with the Israeli forces at military barricades and on confiscated lands. However, their predictions did not play out.

Khaled Awad Allah, a researcher in social sciences and former lecturer at Birzeit University, told Al-Monitor, “The Nakba commemoration has turned from a confrontation with Israel into a celebration. This is a form of political collapse and deterioration of the national Palestinian situation. As a result, the Nakba commemoration has become a series of rituals devoid of spiritual and national values.”

He argued that commemorating the Nakba “has turned into a superficial event lacking depth and understanding of the true meaning and history of the Nakba. The prevalent celebratory aspect of the commemoration reflects the people’s lack of awareness of the Nakba, a decisive and pivotal event in our history.”

Allah added, “The Nakba commemoration must reignite the resistance. But sadly, our national life has become devoid of any act of struggle and of any significance in actual political events. The Nakba has been emptied of its true meaning.”

The head of the Supreme National Committee to Commemorate Nakba Day, Mohammad Alyan, told Al-Monitor, “As Palestinians, we have grown accustomed to singing national songs even during funeral processions. Why, then, are we criticizing them now on Nakba Day?”

He said, “We have a varied event program that encompasses cultural, traditional and awareness aspects as well as confrontations with the Israeli army. Those criticizing the events that were organized did not offer any alternatives. Since March, we have been asking individuals, organizations and participating parties like the Palestine Liberation Organization, factions and Palestinian figures through the media for suggestions for the Nakba events. But the response was weak, and our fellows in the PFLP did not suggest any alternative events.”

Omar Assaf, the secretary of the National Committee for the Defense of the Right of Return and a member of the Supreme National Committee to Commemorate Nakba Day, told Al-Monitor, “We are open to feedback on our work and performance and to fixing any mistakes. Every year we assess the events and learn from the discussions with all parties.”

He added, “There was exaggeration in the criticism of the event, especially comments related to the national artistic aspect that has always been part of our national struggle and cultural identity.”

Despite the dispute over the events of the Nakba commemoration, the tough circumstances of the Palestinian refugees in camps have not changed. Data from the Palestinian Central Bureau of Statistics published May 15 showed that in 2015, 42.8% of Palestinian citizens were refugees in Palestine. Meanwhile, around 5.59% Palestinian refugees were registered by the UNRWA by January 2015. Of them, 28.7% live in 58 camps distributed over 10 camps in Jordan, nine in Syria, 12 in Lebanon, 19 in the West Bank and eight in the Gaza Strip.