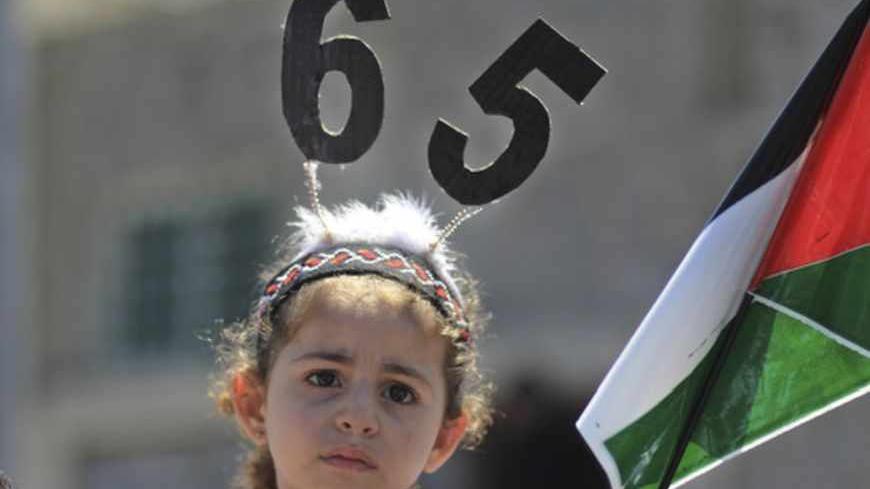 A Palestinian girl attends a Nakba rally in Gaza City May 15, 2013. - REUTERS/Mohammed Salem

The Palestinians commemorated the 65th Nakba anniversary by holding rallies, conferences and meetings in cities across Palestine, issuing press releases and publishing articles on websites. The youth took to social media to stress the right of return and posted pictures of the 1948 Palestinian displacement.

On Wednesday, May 15, the Supreme National Committee to Commemorate the Nakba organized a rally and a festival in the Gaza Strip, including sounding sirens and a observing a minute of silence in the morning. Public participation was noticeably weak as Palestinians, especially the youth, are frustrated about the futility of these activities in light of the political division between Hamas and Fatah.

Participating in the rally, which made its way from the monument of the Unknown Soldier to the UN headquarters in Gaza City, were a few thousand Palestinian activists, some of whom raised keys to their original houses in 1948 to assert that they are hanging on to their land.

They also raised Palestinian flags and chanted slogans demanding the implementation of UN resolution 194. Their banners read “We will come back to our Palestinian villages and cities no matter how long it takes,” “Our right of return is a sacred and inalienable,” “Palestine is an Arab and Muslim land. We cannot give up one inch of it,” “Yes to the right of return. No to the projects of displacement” and “We will definitely return.”

Palestinian refugees, the right of return and compensation for their losses are some of the most important outstanding issues in the peace process. They have been put off to the final negotiations, which the Palestinians and Israelis have not yet agreed upon because Israel refuses the return of millions of Palestinian refugees to their land, now called Israel.

A Fatah central committee member and the chairman of the PLO Department of Refugee Affairs, Zakaria al-Agha, said at the celebration, “Despite the passage of 65 years, the Palestinian people still insist on returning to their homes from which they were displaced. They have rejected all forms of resettlement and alternative options for the homeland of Palestine. They rejected all attempts at their removal or at denying their identity, thus negating the Zionist argument that the old are dying and the young will forget.”

He pointed out that Israel is “… seeking to eliminate the right to return by resettling the Palestinians elsewhere. That project is supported by some countries hostile to our people and our legitimate rights. They recently tried to remove the refugee status from children of Palestinian refugees who were expelled from their homes in 1948. They are trying to end the UNRWA’s [United Nations Relief and Works Agency's] role and are making other efforts to circumvent the right of return and the just rights of our people.”

In his speech, Hamas leader Khalil al-Hayya stressed on the Palestinians’ right of return and he rejected all proposals for an alternative homeland.

At the end of the rally, representatives of Palestinian factions handed a letter to the UN representative in Gaza insisting on the right of return.

The various Palestinian factions issued press releases expressing their resolve to win the right of return and saying that the UNRWA must continue helping the refugees until their cause is resolved, while rejecting an alternative homeland.

About 1.8 million Palestinians live in Gaza, nearly 70% of them are refugees who live in five camps set up by the UNRWA. As their numbers increased, many moved to the cities of the five provinces, while the camps still house hundreds of thousands.

In the Shati refugee camp west of Gaza City, everything seemed normal on Nakba day. Refugees interviewed by Al-Monitor expressed their devotion to the right of return and to their rights guaranteed by international resolutions. They also did not hide their frustration with the political status quo, concerned with the division and its negative impact on the restoration of their rights.

Refugee Mahmoud Baroud said, “We cannot give up on the right of return. We can never forget that right. My father told me about our house, which he left in 1948. And I, in turn, instill in my children the love of the homeland and teach them what I learned from their grandfather.”

On social-networking sites, Palestinian youth expressed their hope for the right of return by talking about the towns and villages from which their parents and grandparents were displaced in the mid-20th century. They posted photographs of Palestinian refugees from that era, YouTube clips about Nakba and documentary films. But the posts and comments also spoke about the political conflict between Hamas and Fatah, and each party’s position on the refugee issue.

Hazem Balousha is a Palestinian journalist based in Gaza City. He has worked as a news producer for BBC World Service and contributed to Deutsche Welle; he has written for The Guardian, Al-Raya (Qatar) and other publications. He is also the founder of the Palestinian Institute for Communication and Development (PICD). On Twitter: @iHaZeMi