When Prime Minister Benjamin Netanyahu said that Israeli military officers can express themselves ''in the relevant forums,'' it seems he was really saying that senior officials should not express any opinion that contradicts his own. 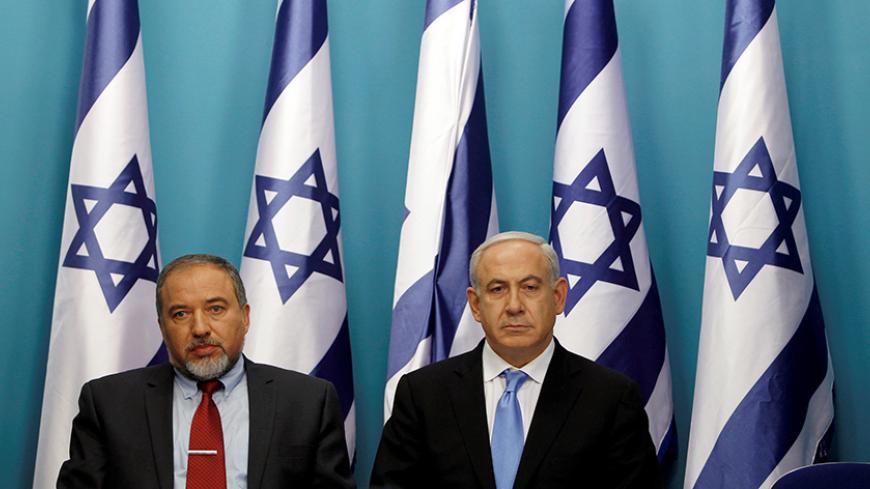 “I call on you and your subordinates, once again, to keep speaking your minds,” Defense Minister Moshe Ya'alon demanded of the army’s officers in a speech he delivered at a May 15 reception marking Independence Day. "Be brave, not only on the battlefield, but also at the discussion table,” the minister urged them, speaking in front of the cameras. Ya'alon was not suggesting and not asking. He was demanding. To allay any doubts, Ya'alon added that the men in uniform should speak their minds, saying, "Do so even if your comments are not part of the mainstream, and even if they stand in contrast with the ideas adopted by the senior command, or the government."

Prime Minister Benjamin Netanyahu, on the other hand, argued that the Israel Defense Forces (IDF) “is the people's army and needs to be kept away from political divisions." Netanyahu’s response to Ya'alon was clearly directed also at Deputy Chief of Staff Maj. Gen. Yair Golan, who said in a May 4 speech on the eve of Holocaust Remembrance Day that he sees "revolting" trends in Israel reminiscent of "the abhorrent processes that took place in Europe, and Germany in particular, some 70, 80 or 90 years ago."

But the prime minister was troubled by the content of Golan’s message, not by the identity of the speaker. If, for example, the deputy chief of staff had said that the settlements — a deeply controversial issue — are essential to the security of the state, he could have expected a pat on the shoulder and improved his chances of being promoted.

Golan condemned certain trends in Israeli society. The senior officer would probably not have been backed by the defense chief if he had criticized government policy in the occupied territories or the opportunity Israel missed in ignoring the 2002 Arab Peace Initiative. Top officers and even mid-ranking commanders still fear that even a hint of criticism on their part could shorten their military careers. Only their pillows are privy to their frustration and despair over the politicians’ dangerous sinking in the quagmire of the Israeli-Palestinian conflict. At most they share their feelings in off-the-record background briefings with trusted journalists.

Netanyahu indirectly criticized the forum at which Golan delivered his remarks. In a statement following Netanyahu's May 16 meeting with Ya'alon, the prime minister claimed that IDF commanders speak their minds freely “in the relevant forums and on the issues that are under their jurisdiction.” Indeed, in internal discussions, senior officials in the intelligence community, in the army’s planning division, at the headquarters of the Coordinator of Government Activities in the Territories and in the civil administration do occasionally warn that the climate of frustration and despair on the Palestinian street will increase terror attacks in Israel. Often the officers report in “the relevant forums” such as the defense and diplomacy ministerial Cabinet or the Knesset’s diplomacy and defense committee on the dangers to state security posed by for-Jews-only construction and the destruction of Palestinian homes. Their voices are drowned out by a cacophony of aggressive gobbledygook.

As for freedom of speech, civilian officials have a harder time than their colleagues in the defense agencies. The Foreign Ministry staff doesn't have a minister who encourages them to speak their minds on any issue and promises immunity to critics. The message emanating from the office of the prime minister — who among his many jobs holds the position of foreign minister — is the exact opposite of the welcome message relayed by the minister of defense. Ya'alon said, “A good army is an army whose commanders, junior and senior alike, feel confident in their ability to speak their mind at all times.” The message Netanyahu sends is that a good foreign service is one whose managers, junior as well as senior, keep their opinions to themselves. Any hint of leaning to the left results in the shortening of desirable missions abroad.

Senior Foreign Ministry officials have been telling correspondents and analysts of diplomatic affairs, among them yours truly, that there’s a complete disconnect between the professional and the political levels. Had they not been afraid of being heard, the officials would have burst out laughing upon hearing claims that Golan’s comments “caused a great deal of damage to Israel’s public diplomacy throughout the world,” to quote Science, Technology and Space Minister Ophir Akunis. A top ministry official told me this week on condition of anonymity that one tender for the expansion of a settlement causes far graver damage to Israel’s international standing.

Israeli ambassadors in foreign capitals were forced to muster their diplomatic skills to explain the encouraging phone call that their boss made to the parents of a soldier accused of deliberately shooting an injured attacker in Hebron on March 24. The diplomats have no idea how to deal with questions about the initiative of Justice Minister Ayelet Shaked to impose Israeli law in the West Bank. To this day the Foreign Ministry is awaiting instructions from the minister on how to explain the campaign against human rights organizations in the recently adopted “transparency law.” They see their minister mostly on television. They read his “talking points” on the pages of pro-Netanyahu daily Israel Hayom.

In 2009, when Netanyahu handed the position of foreign minister to the chairman of Yisrael Beiteinu, Avigdor Liberman, Israeli ambassadors and foreign diplomats in Israel had to deal with different, often contradictory messages from the prime minister’s office and that of the foreign minister. One can only wonder how Israel’s defense establishment and its standing in the international community will look if Netanyahu gives Liberman the defense portfolio for his party joining the ruling coalition. Would Golan have permitted himself to speak out had Liberman been his defense minister?

The Foreign Ministry doesn’t only engage in public diplomacy. Professional units within that godforsaken ministry deal with essential and sensitive issues relating to national security. The Strategic Affairs Division, for example, deals with the Iranian nuclear issue, among other things, and the Center for Policy Research, established following the intelligence failure of the 1973 Yom Kippur War, is tasked with supplementing the intelligence assessments of the military and the Mossad. Meanwhile, the National Security Council, which reports directly to the prime minister, exists mostly on paper. Since January, after he had to delay the appointment of Brig. Gen. (ret.) Avriel Bar-Yosef to head the council, Netanyahu has not managed to appoint a successor to Yossi Cohen, who has taken over as Mossad chief.