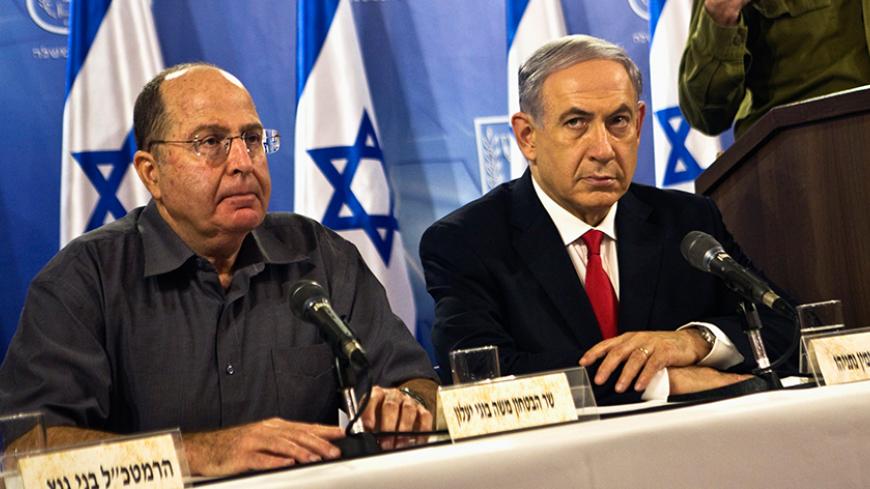 Israel's Memorial Day for Fallen Soldiers is the country's most sensitive period. At this time, Israelis forget about the politics and polemics that tear the nation apart and wrap themselves in the mantle of collective grief. But this year, Defense Minister Moshe Ya'alon would not be deterred. He used his speech at the Memorial Day ceremony on May 11 to further his vociferous public dispute with the rest of the right-wing figures and political leaders in Israel, saying, "Woe to us if we lose our way … and our hallowed values that have accompanied us for generations. Compromising these values may well create a slippery slope to the abyss." Ya'alon added that Israelis must understand the limitations of power, "meticulously safeguard our purity of arms and our humanity, not lose our heads, … eradicate racism, violence, verbal and physical attacks on women and exclusion of the other."

This speech went over relatively peacefully. The following day, Israel celebrated its independence with fireworks, flags and cookouts. The air force put on an air show and filled the country's skies. Prime Minister Benjamin Netanyahu surprised everyone when he announced that he supports a return to the Israel Defense Forces' tradition of holding military parades in Jerusalem. The IDF parade tradition ended on Independence Day in 1973, only a few months before the Yom Kippur War broke out. Netanyahu's initiative to bring the parade back was viewed as another right-wing ultranationalist gesture to mollify the Israeli electorate that has been steadily migrating to the right in recent years.

But Ya'alon held back until after the holiday, when the real bombshell publicly exposed the bitter conflict between himself and the prime minister. On May 15, after the conclusion of the Independence Day festivities, the defense minister hosted the traditional reception at the Defense Ministry headquarters in Tel Aviv. The yearly event is put on for IDF officers, higher-ups in the defense establishment, ambassadors and foreign military attaches in Israel. Ya'alon meticulously planned his course of action. He embarked on a determined and scathing verbal offensive against the prime minister, other right-wing ministers and the Likud — everyone who has been waging a polite war of attrition against Ya'alon.

Ya'alon meticulously repeated all the principles of ethics, values and purity of arms that the IDF is supposed to strictly uphold and then added his own statement and personal directive: "Tonight I repeat and again demand from you and your subordinates: Continue to say what is in your hearts. Do this even if your words do not reflect the mainstream opinion, even if they differ from the concepts and stances adopted by the senior command or the political echelons. Do not worry, do not be deterred or hesitate. … The IDF was and remains the State of Israel's key melting pot. We must guard it carefully and not allow it to be infiltrated by violent, inciting agents or those who try to influence its soldiers. In recent months we find ourselves struggling against a radical minority that acts on the ground and in the social networks. Part of it has even infiltrated our society's central stream, undercover and camouflaged, and it attempts to influence the IDF's image and values."

Ya'alon's words were shots fired in the fight between him and the rest of the Israeli right. He stands almost alone on the battleground and sticks to his guns. The tension between him and Netanyahu built up slowly after the March 24 incident in which an Israeli soldier shot to death an immobilized Palestinian attacker in Hebron, and reached its peak after the speech of Deputy Chief of Staff Gen. Yair Golan for Holocaust Day. Golan spoke about certain phenomena in Israel that are beginning to remind him of the "abhorrent processes" that occurred in Germany of the 1930s.

Golan's words started a public storm in the country. He was reprimanded practically by the entire diplomatic echelon including the prime minister. Netanyahu even dedicated a public speech to Golan at the opening of the government session on May 8. And after all this, Ya'alon comes along and backs up the deputy chief of staff in a direct and flagrant manner, over Netanyahu's head and in direct opposition to the prime minister's directives. Ya'alon went ever further by imploring IDF officers to continue to spill their hearts without fear or bias.

As expected, Netanyahu immediately summoned Ya'alon for a "clarification" talk (read: reprimand). When the one-hour meeting was over, the prime minister and the defense minister published a joint brief statement declaring, "There is no dispute, nor was there ever, as to the army being subordinate to the political echelon, and officers are free to express their views in relevant forums." Obviously, both men did their best to reach some sort of cease-fire. Nevertheless, it is clear to all that the last word has not been said between them, and that it will be difficult to restore the relations of the two former allies to what they were up until a few months ago.

At the moment, Netanyahu is not able to discharge Ya’alon. He already fired one defense minister (Yitzhak Mordechai in 1999), and came out looking bad. Netanyahu was deposed in the elections that took place immediately afterward. Netanyahu's coalition is razor thin, a total of only 61 Knesset seats, and he needs every vote.

The question is where Ya'alon is heading with all this. It is becoming more and more evident that his chances of landing a high place on the next Likud list are negligible. Ya'alon stands alone on his watch in the Likud, attacked from all sides and slandered on a daily basis by his colleagues in the party. Wild speculation is sweeping the political establishment that Ya'alon is preparing to establish a new political platform, or perhaps will join up with two former Likud seniors: Finance Minister Moshe Kahlon and Gideon Saar, who are planning a new party.

There are also occasional rumors of his joining and heading the Zionist Camp. In case anyone has forgotten, Ya'alon began his political path as a member of the Labor movement. He had been a kibbutz member and shared the Labor perspective until his appointment as head of Military Intelligence during the Oslo process days. Afterward, he became more pragmatic, but many others, even in the Israeli peace camp, also became more realistic. Today's Labor suffers from a severe leadership crisis and cries out for a head with a military-defense record. Former Chief of Staff Gabi Ashkenazi has been mentioned in this context. Now, Ya'alon's name has also been brought up. While head Isaac Herzog conducts intensive negotiations with Netanyahu on the Zionist Camp joining the government, Ya'alon is distancing himself from Netanyahu and everything that he represents.

More than just bad blood separates them. It is an open, clear rupture, a deep chasm between worldviews, and it involves no small amount of personal animosity.