Why some Palestinians are siding with the IDF

Palestinian officials do not think the rift between the IDF and Israel's political leadership will improve the Palestinians' situation or advance diplomacy toward peace. 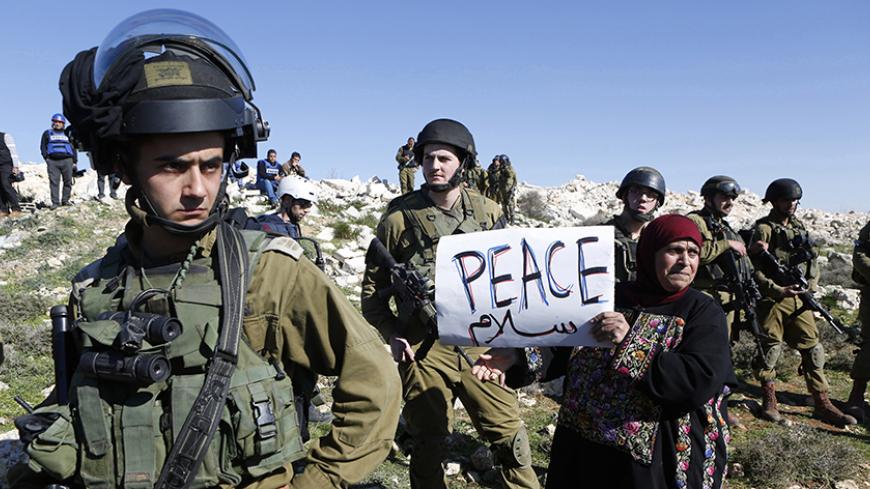 A protester holds a placard as she stands next to Israeli soldiers during a protest against Israeli settlements in Beit Fajjar town south of the West Bank city of Bethlehem, Dec. 27, 2014. - REUTERS/Mussa Qawasma

“Surprised and not surprised” is how Fatah member Qadura Fares described the reaction of the Palestinian leadership to the tensions in Israel between top military and defense officials and the political leadership following the May 4 remarks by Israel Defense Forces (IDF) Deputy Chief of Staff Yair Golan on the eve of Holocaust Remembrance Day. On the one hand, they were surprised by the freedom and intensity with which a senior IDF officer delivered an outspoken social critique and exposed the helplessness of the political echelon in dealing with the social trends he described. Maj. Gen. Golan had said that he sees signs in Israel of “abhorrent processes that took place in Europe, and Germany in particular, some 70, 80 or 90 years ago.” On the other hand, the Palestinians had already noticed the deep divisions among top-level Israeli officials over the handling of the current intifada and the climate created by the right wing.

“Since the latest escalation, the IDF has had to practically block the right-wing Netanyahu government from running amuck,” said Fares in an interview with Al-Monitor. “This was clear for all to see.” According to Fares, during meetings with the Israelis to discuss ongoing security cooperation, the Palestinian Authority (PA) leadership became aware of the responsibility and wisdom displayed by the Israeli military vis-a-vis the government of Prime Minister Benjamin Netanyahu.

“We saw that the army and the Shin Bet were starting to worry about the future of the state under the leadership of the radical right and were concerned about a phenomena that could bring about Israel’s demise,” said Fares, who believes that Israel’s top brass had restrained itself for a long time from criticizing Netanyahu’s policies, only recently deciding to raise its voice in opposition.

“Up to now, they [Israeli security officials] respected conventions, because the helm of the state is in the hands of the politicians,” Fares remarked. “But suddenly they realized that the political and party echelons had gone too far. Way too far. They understood that if they leave the decisions to them, their country could turn into a fascist, racist state, and they might be seen as having lent a hand to this.”

Fares thinks that the military and most of the defense establishment have spoken out against the political echelon in general, and Netanyahu in particular, because they realized that continuing to heed their instructions, carrying out the dictates of the right-wing government, and the dangerous climate it has created in Israel, in their eyes, could be the end of the state of which they have dreamt.

Assessing the situation, Sufian Abu Zaida, a former Fatah official considered a close associate of former Fatah member Mohammed Dahlan, told Al-Monitor, “[It] appears to the Palestinians somewhat strange. The [Israeli] army, like any army in the world, usually adopts more radical positions than those of the political echelon. But today, with the Israeli government so radical in its essence and conduct, the top military command is, against its will, having to present moderate stances, both in terms of ethical norms and diplomacy.”

Although Abu Zaida, Fares and other top Palestinian officials in the West Bank recognized that top Israeli officers were fed up with the politicians, they were nonetheless surprised by Golan’s remarks. “If the army had gone in the direction that members of the Netanyahu government wanted to drag it, we would today have been in a different place,” said Abu Zaida. “The Israeli army also learned the lessons of the first and second intifadas and also of the rounds of violence in between the two. It managed to impose [on the political leadership] its approach of the best way to prevent most of the Palestinians [from joining the current intifada], focusing on those who it views as the instigators of the events.”

Abu Zaida also said that the Palestinians are not expecting to benefit in any way from the divisions within Israel, but are in despair over the dire situation in the Palestinian Authority-controlled territories.

The Palestinian media have been closely monitoring tensions in Israel, the latest expression of which was the May 16 meeting between the prime minister and Defense Minister Moshe Ya'alon. Netanyahu summoned Ya'alon after the defense minister expressed his support for senior IDF commanders and urged them to keep expressing their thoughts. The prevailing view in Ramallah, said a senior Palestinian source speaking on condition of anonymity, is that these are the “first signs of an intifada” by the Israeli defense establishment against Netanyahu, but it will not be sufficiently effective to shake up the government.

Mohammed Najib, military affairs commentator for the defense magazine Jane’s, confirmed that Palestinian decision-makers had anticipated the head-on collision between Israel's political and military echelons. “Our analysis of these events is clear,” he told Al-Monitor. “The army and the Shin Bet in Israel, the Israeli media and the opposition have all understood that there’s no solution to the complex and dangerous situation other than through a diplomatic process. Only Netanyahu and his rightist coalition think the solution lies in adopting defense measures. We believe that this is the backdrop for the clash and that it erupted as a result of the disagreements and power struggles.”

Najib added that he had recently been following the activities of the government’s coordinator in the territories, Maj. Gen. Yoav “Poli” Mordechai, and recognized the extent to which the civil administration under his command was energetically trying to prevent deterioration on the ground and worrying that things might get out of control.

“I can tell you from my experience, and based on many conversations I’ve had with the Palestinian leadership, they are convinced that the Israeli defense establishment understands full well Israel’s security needs, and those of the Palestinians, and is far more worried than the Israeli politicians,” said Najib. According to him, Adnan al-Damiri, spokesman for the Palestinian security services, Jibril Rajoub of the Palestinian Counter Security Forces and other senior Palestinian intelligence officials told him that in joint discussions with the Israelis, the army appears to be caught between their concept of security and the demands of the political echelon.

No one in the senior or junior Palestinian leadership believes that the highly public disagreement between the army and the government in Israel will result in significant change for the Palestinians. Nobody is holding out hope that Israel will change its policy toward them or that the Israeli army will succeed in forcing the Netanyahu government to adopt new policies. At most, the Palestinians believe, the Israeli military echelon will succeed in blocking unwise decisions that the radical right might try to push through.

“The leadership of the right has managed to drag Israeli society into dangerous places — incitement, hatred and radical ideology,” Fares remarked. “But people have to understand that as far as we’re concerned, the two main instruments that Israel uses to humiliate, hurt and oppress us are the army and the Shin Bet. What they’re doing is not for us. The army and Shin Bet are not in love with us. They’re simply worried about the future of their state.”