Why Egypt's ministries are on the move

Egypt is moving several state institutions out of downtown Cairo in what some say is a way to avoid the protests that have long centered in the area. 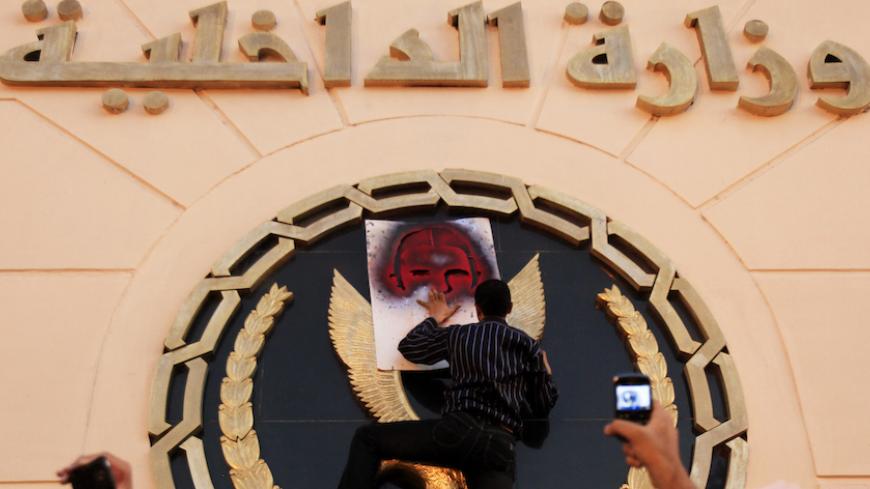 A protester spray paints a picture of the late activist Khaled Said on the emblem of the Ministry of Interior building during a demonstration against police brutality in Cairo, on the first anniversary of Said's death, June 6, 2011. - REUTERS/Amr Abdallah Dalsh

CAIRO — Egyptian President Abdel Fattah al-Sisi inaugurated a new office of the Interior Ministry at the Police Academy in New Cairo, east of the Egyptian capital. The April 27 move came as part of the ministry's relocation from the Cairo's downtown area, which has become an all but official protest center over the last several years.

The city of New Cairo, which was established by presidential decree in 2000, is comprised of a number of affluent residential complexes. It has also become the home of key state institutions that have recently been moved out of downtown Cairo, such as the prosecutor-general's office, the Police Academy, state security offices and the State Lawsuits Authority.

The transfer of many government facilities to New Cairo is part of the government's plan to relocate all remaining ministries out of the capital's downtown and into New Cairo, the new administrative capital. The government plans to complete this transfer within two years, to an area roughly 60 kilometers (37 miles) from the heart of Cairo.

This government plan amounts to a transformation of the downtown area — a recent center of demonstrations that has long served as a ministerial zone, having housed the Ministries of the Interior, Justice, Health, Education, Military Production, Supply and Internal Trade, International Education and Scientific Research alongside the Egyptian Cabinet and the parliament — into a cultural heritage area. The transfer of these ministries to their new location will have a profound impact on the downtown area.

Hani Yunis, an official spokesman for the Egyptian Housing Ministry, told Al-Monitor, "Government facilities and institutions will be enclosed between the regions of New Cairo, which contains more than one office for key ministries and institutions at present, and the new administrative capital, to which all remaining ministries will be transferred. That is, after their new facilities have finished construction. [The goal is] to alleviate the pressure on the downtown region that has housed these institutions and ministries for the last several decades."

Yunis added that the new administrative capital will be a short distance from New Cairo and "will include facilities for 12 ministries, alongside the Cabinet and the parliament, which will be transferred with all their dependencies following the establishment of the administrative capital."

He noted that construction of these offices should begin within two months, and expressed his expectation that all of these state institutions "should be transferred to their new offices in a period of between two and a half to three years."

For his part, Gen. Ahmad al-Badry, the former head of the Police Academy, said in remarks to Al-Monitor that the decision to transfer the ministry's office to the new site alongside a number of ministerial offices out of downtown Cairo was related to the country's current security climate. "The security situation is connected to the targeting of these institutions by a number of protesters centered in downtown Cairo. They seek to spread chaos throughout the country, especially after the demonstrations became unfortunately chaotic themselves. And they're attempting to break the aura of authority around state institutions by putting them under siege, covering their walls with graffiti of vulgar images and language degrading to those who work there."

Badry stressed that the state was seeking to exploit the wide-open spaces and the network of new roads within New Cairo to set up buildings characterized by a high degree of development and modernization. He said the government also hopes to establish new facilities to train public servants and increase their efficiency, noting that the old buildings currently being used for public institutions have not been modernized.

Badry added that the ministry's new buildings will be equipped with the most modern security and development programs, with electronic gates at every entrance. He said, "The security challenges the country is going through have forced the ministry to accelerate its construction plans."

Ali al-Rigal, a researcher in political sociology, has a different take on the decision to move government offices away from centers of protest to new cities. He said it comes from political and sociological considerations, whereby the ruling authority wants these institutions to be located among a wealthy upper class — typically sympathetic with the government — to serve as a first line of defense for the buildings. "The regime seeks, through this step, to isolate itself from the old city and its residential areas. It believes they're a burden and a danger to it, due to this class' political leanings, which tend to cut against the regime," he said.

Rigal added, "The government is sure that the bourgeois social class will not come out to demonstrate in opposition against it, since it understands the government's role, historically, has had the defense of the bourgeoisie's interests, at the expense of other classes, as a fixed pillar of its security policy."

He expressed his belief that the regime is currently isolated, "[caught] between oppressed, laboring classes and the more affluent classes. It tends to move with the class that is more supportive of it, and that lives in its midst, thus removing itself from the class that it has categorized as [vulnerable to] demagoguery and useless for anything other than demonstrations, and [supplying] thugs when necessary."

He added, "The government seeks to impose general sovereignty over all by a variety of means, such as establishing new offices for its institutions, especially after its mystique of authority was broken by civil society in the wake of the January 25 Revolution, which was effectively a wide-scale defeat for them on every level."

The project of transferring ministry buildings and government agencies and assets out of downtown Cairo is not a new one, but it seems that its tempo has accelerated of late due to the government's urgent desire to extract these critical governmental facilities out of the residential areas to put some distance between them and areas of protests and demonstrations.