With help from Copenhagen, Cairo makes room for bicyclists

In partnership with the Cairo government, the United Nations and the Danish Embassy, a civil society organization hopes to cut down on traffic and encourage healthier lifestyles with bicycle-friendly infrastructure. 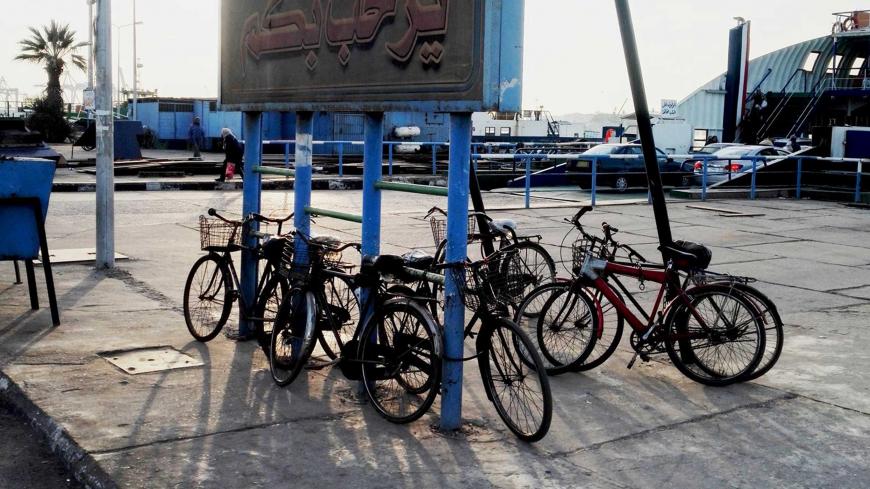 A rack of bikes is seen in Port Said, Egypt, in an image uploaded May 13, 2018. - Facebook/sekkhadra

Residents of Heliopolis, an upscale suburb of Cairo, woke up to the passage of 200 cyclists pedaling through on May 11.

The cycling tour celebrates the beginning of an urban project to get residents of Cairo to drive less and employ more environmentally-friendly transportation. Called Sekketak Khadra (Your Road is Green), the initiative aims to integrate cycling into Egyptians' daily lives, as it had been in the 1950s and 60s.

Since then, the parties have conducted a study to select strategic locations for 100 bicycle racks in Heliopolis and downtown Cairo. Some of them are already designed and installed. The remaining racks will be completed by the end of May.

Coordinator Ahmed El-Dorghami said the project aims to bring back cycling to Egypt. "Riding bikes in Egypt is not new in our country," he told Al-Monitor. "In the good old days, in the 1950s, using bikes was normal on the Egyptian streets.”

Dorghami added that the partners in the protocol are mindful of the need to maintain both security and accessibility in the areas where racks are located. "We have selected the sites for the racks in front of shops that are equipped with surveillance cameras," he said, explaining that the team informed the shops and got them on board with the project.

Heliopolis, an affluent suburb known for its large boulevards and green spaces, was established in 1905 by the Heliopolis Oasis Company headed by the renowned amateur Egyptologist and prominent Belgian entrepreneur Baron Empain and Egyptian Prime Minister Nubar Pasha’s son Boghos. In this well-off suburb, very few people use bikes outside of recreation.

"There are people who own and occasionally ride bikes [here and in Cairo], but don’t know where they park them. Some tie them to lamp posts, which is not safe," said Rana El-Sadek, communications manager at Nahdet El Mahrousa, the incubator of Green Arm.

"Now that we have installed these racks, the cyclists will find a place to park,” she said. “I hope that people of both sexes and various ages riding bikes will become a common sight on the Egyptian streets. That’s what we hope,” she said, adding that another project to establish bicycle lanes will be needed when the number of riders increases.

Salma Mousallam, a program officer for UN Habitat, told Al-Monitor, "This project aims to encourage people to ride bikes as a means of transportation, not just a hobby. It will help solve the problem of high traffic in the Egyptian capital. Until the end of the year, we will work on establishing more racks near metro stations to allow the cyclists to leave them there and use the metro."

Though bikes were common in Egypt as late as the 1960s, increasing traffic, particularly in the capital, gradually made biking dangerous in a city known for its pollution and its hectic and dangerous traffic. However, since the 2000s, there have been many calls for a return to cycling culture and plans for bike-sharing services. Cycle Egypt, a major cycling club, organizes tours both in cities and in rural areas to promote the activity.

Sherif Alaa, a political adviser for the Danish Embassy, told Al-Monitor that the embassy is keen to contribute to Cairo's infrastructure and encourage its citizens to ride bikes.

"Today's event is just a step in a long road," he added, "The embassy’s contribution will continue to fund other parking places in many districts."

The choice of Denmark as a partner in this project was a logical one. Its capital, Copenhagen, is world famous for its biking culture, with 390 kilometers (242 miles) of designated bike lanes.

“The Danes started by investing in the infrastructure around bikes: bicycle racks like Sekketak Khadra is doing now, building bicycle lanes and also promoting bike culture and educating the population about it, while actively engaging the local communities in these processes,” he said.