After assaulting a deputy in Ecuador, Turkish President Recep Tayyip Erdogan’s bodyguards this time terrorize the media and protesters in Washington. 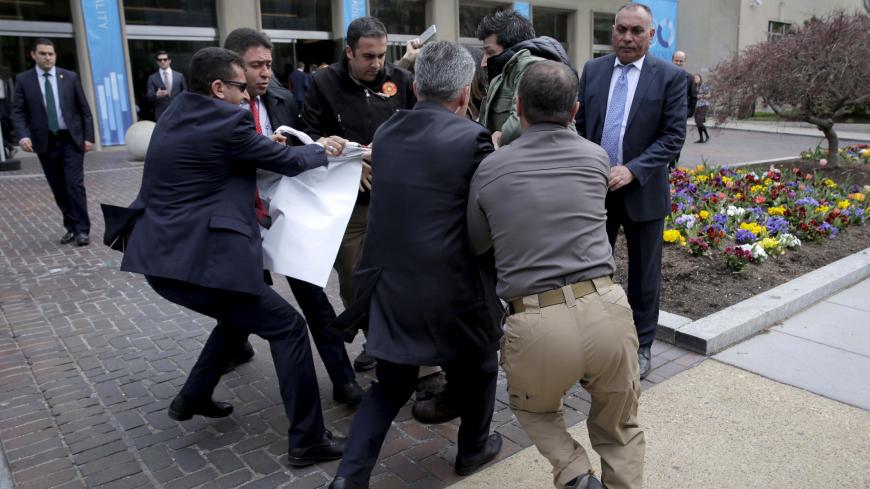 Turkish security personnel struggle to take a sign away from protesters in front of the Brookings Institution before the arrival of Turkish President Recep Tayyip Erdogan in Washington, March 31, 2016. - REUTERS/Joshua Roberts

Up until a couple of years ago, Turkish President Recep Tayyip Erdogan was a leader much in demand by foreign statesmen. And it wasn't just Erdogan who was in demand: Prestigious think tanks used to mobilize to host Turkish government officials and parliamentary teams visiting Washington.

But Turkey's growing authoritarian trend has made Turkish officials unwanted guests. As if this was not enough, we now have to deal with incidents caused by Erdogan’s bodyguards.

What we remember from Erdogan’s trip to Washington to attend the Nuclear Security Summit are the scenes of senseless assaults on journalists and protesters. This wasn’t the first case of friction between Turkish bodyguards and security units of host countries. What is clear is that protesters and journalists now have to risk suffering violence from the bodyguards not only in Turkey, but also in the countries Erdogan visits.

The most-remembered incident of recent times was in Ecuador during Erdogan’s Latin America trip when his bodyguards handcuffed three Ecuadorian women and smashed the nose of legislator Diego Vintimilla, who was trying to intervene.

Al-Monitor asked Rosana Alvarado, deputy speaker of Ecuador's legislature, about that unpleasant incident. She said, “Until Erdogan’s bodyguards assaulted a deputy, our public was not aware of Turkey. Nobody knew who was a Turk or a Kurd. Now everybody knows and naturally we are on the side of the Kurds. We don’t want to see Erdogan in our country again.”

While we were hoping lessons would be learned from that episode, even worse scenes were staged in Washington. First of all, from the outset, there was tension about the visit. A request for a bilateral meeting with President Barack Obama was turned into an issue of national pride. If Erdogan spokesman Ibrahim Kalin had not said, “We are striving for a meeting with Obama,” perhaps the debate would not have escalated.

After all, this was not an official visit to Washington. It was perfectly reasonable that a personal meeting with Obama, who was hosting about 50 leaders, could not be arranged easily. But Ankara’s vocal persistence for a personal meeting and Obama’s reluctance to reserve time for Erdogan despite the urgency of regional issues made the issue more consequential. Obama’s clearly hesitant position was seen as a personal message to Erdogan. After that point, an Erdogan-Obama photo opportunity became indispensable.

Why was this photograph so crucial for the Turkish government? After all, Erdogan is a leader who was hosted by US thinks tanks even before he started his march to power in 2002. Those who had criticized then-Prime Minister Bulent Ecevit’s humble posture when meeting with President Bill Clinton in 1999 had applauded Erdogan’s crossing his legs when meeting with President George W. Bush.

But since Erdogan’s disastrous May 2013 White House visit, Erdogan’s loss of his privileged position with the White House became a matter of dignity and concern for Turkey. Erdogan, despite his proven 50% popularity in Turkey, wants to make sure that he still has the backing of the White House. While Erdogan was in Washington, the Turkish Armed Forces released an unusual statement reacting to speculation that secretive Gulenists in the army would be staging a coup and that the arrest of businessman Reza Zarrab in the United States was a part of the coup plot. The Turkish high command said, “Discipline, absolute obedience and single command are the basic tenets of the Turkish Armed Forces. There is no question of the existence of any illegal phenomenon or movement outside the chain-of-command structure.”

Obama’s dragging his feet in agreeing to a meeting gave the Turkish political opposition an opportunity to mock Erdogan. A video showing the warm welcome Washington accorded to then-President Celal Bayar in 1954 was circulated on social media with a note that “those were the days.”

In addition to the nerve-racking arguments, it wasn’t easy to find a place for Erdogan to give a talk. The Carnegie Foundation refused to provide him a platform, but the Brookings Institution finally agreed to make its premises available following the intervention of a leading Turkish businesswoman.

The Washington visit that started in that apprehensive atmosphere was naturally pregnant to incidents. The first took place in front of the St. Regis Hotel. The bodyguards who emitted bizarre sounds to suppress the yelling of a small group protesting Erdogan provided entertainment to passersby.

But his appearance at the Brookings Institution provided ample material for anyone writing a manual on how to cause a scandal. Adem Arslan, correspondent of Ozgur Dusunce newspaper, an organ of the Gulen movement, was ejected from the meeting hall by bodyguards shouting, “We will kill you, you traitor.” Strobe Talbott, the president of Brookings, intervened and returned Arslan back to the hall.

The bodyguards also charged at Amberin Zaman, a columnist for Al-Monitor, insulting her as the “PKK’s whore.” Turkey expert Alan Makovsky stepped in to protect Zaman. Zaman shared her experience with Al-Monitor, saying, “It was clear that there was going to be trouble from the get-go. Long before he arrived, Erdogan's security detail tried to silence Kurdish demonstrators who were on the opposite side of the street. The presence of pro-Gulenist journalists drove the security detail berserk. One of the pro-Gulen journalists was forcibly removed from the building although he was accredited by Brookings to follow the event. They hurled insults at and kicked another. And they insulted me in the foulest possible language as well, swarming around me and ordering me to leave with menacing looks and body language.”

Bodyguards also assaulted Emre Uslu, a correspondent for Today’s Zaman. The correspondent for National Public Radio also got his share of the bodyguards' kicks. According to former deputy Suat Kiniklioglu, who appeared on IMC TV’s "Without Borders" program, even before Erdogan reached Brookings, Talbott had warned that should the terror of bodyguards continue, he would cancel the meeting. In a nutshell, Erdogan’s bodyguards, who issued threats, swore and let loose their kicks, forced US security people to tell them, “Take it easy, you are in the US.”

A denunciation also came from Tommy Burr, president of the National Press Club.

While all these incidents were taking place, Americans were mesmerized by seeing rental vans driving through streets of Washington adorned with slogans: “We love you Erdogan / We thank you President Erdogan for protecting Syrian refugees / Stop PKK terror/ Stop supporting Gulen with US taxpayers' money / Expose Gulen / Truth+Peace=Erdogan / Grand nation, grand leader Erdogan / Don’t support PKK, PYD, YPG and HPD [sic].” (The PKK is the Kurdistan Workers Party, the PYD the Syrian Kurdish Democratic Union Party, the YPG is the PYD's armed People's Protection Units and the Turkish HDP is the predominantly Kurdish People's Democratic Party.)

This unprecedented Erdogan propaganda effort in Washington made some people ask sarcastically if Erdogan was competing with Republican front-runner Donald Trump. It was a pathetic idea that couldn’t cover up the scandals.

In sum, the Washington visit ended with scenes making a mockery of Turkey's image. While Erdogan was telling Americans that Turkey is a democratic and free country that guarantees freedom of expression, scenes outside were contradicting him.

So what was the outcome of the Washington visit? Well, the much-wanted Obama-Erdogan photo opportunity appeared in newspapers, but no progress was achieved on issues they discussed. There was no change in the US attitude toward Turkish opposition to the PYD and the YPG. The Erdogan government is now trying to score points in the United States by accusing the Gulen movement of tax evasion and bribery, but the United States doesn’t appear inclined to extradite Fethullah Gulen, who lives in Pennsylvania. We still don’t have anyone who believes that freedom of the press and expression are guaranteed in Turkey, where journalists, academics and intellectuals are constantly accused of supporting terror.

The White House was very discreet about the meeting of the two leaders, but Obama’s concluding press statement was more than enough to make Erdogan unhappy. During a press conference following the Nuclear Security Summit, Obama was asked if he believed Erdogan is an authoritarian.

“I have expressed this to him directly, so it’s no secret, that there are some trends within Turkey that I have been troubled with,” Obama said. "There is no doubt that President Erdogan has been repeatedly elected through a democratic process, but I think the approach that they’ve been taking towards the press is one that could lead Turkey down a path that would be very troubling.”

In his remarks, obviously added to prevent a public spat, Obama also praised Turkey, a NATO ally, calling the country a vital partner in the fight against the Islamic State (IS) in Iraq and Syria.

"It is an extraordinarily important partner in our fight against [IS]; it is a country with which we have a long and strategic relationship,” he said. “And President Erdogan is someone who I’ve dealt with since I came into office, and in a whole range of areas we’ve had a productive partnership."

Turkish journalists accompanying Erdogan said the president was furious with Obama’s criticism, saying, “I was sad to hear such a criticism was made in my absence. But let me tell you, the matters you are referring to were not discussed in our meeting with Mr. Obama.”