Why Erdogan's US visit will only create more problems for Turkey

The expectation that Erdogan and Trump will get along because they share dominant personality traits backfired, as Erdogan concluded the shortest international meeting in his 15-year political history. 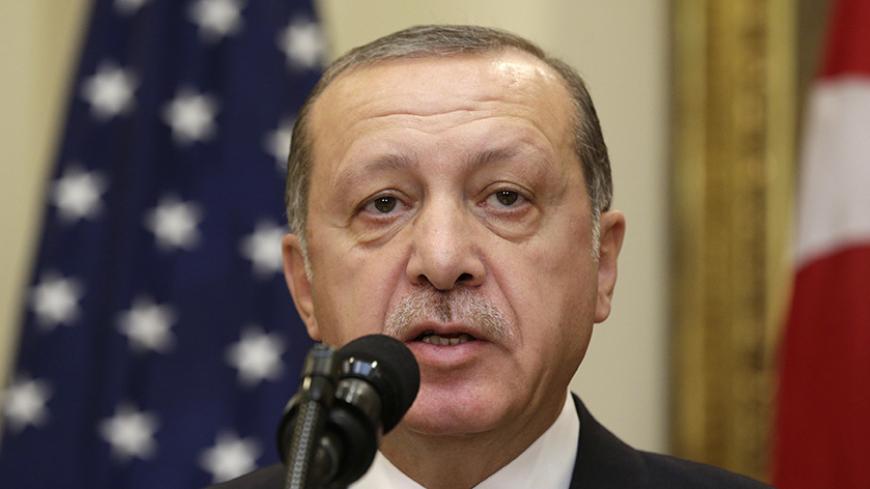 Turkish President Recep Tayyip Erdogan delivers a statement to reporters alongside US President Donald Trump after their meeting at the White House in Washington, May 16, 2017. - REUTERS/Kevin Lamarque

Since US President Donald Trump’s election, President Recep Tayyip Erdogan has hoped for a fresh start with the United States. For the last four months, the pro-Erdogan media’s pragmatism has been built on two pillars: put the blame on the Barack Obama administration for all things wrong in Syria and stand up for Trump against all accusations.

Finally, on May 16 the anticipated Erdogan-Trump meeting took place. Seasoned journalist Unsal Unlu summed it up by saying, “This trip is more difficult to write about than to experience it because the get-together of the two leaders lasted for 22 minutes and we will spend hours and hours discussing it.”

He had a point. Pro-Justice and Development Party (AKP) commentators struggled to portray the trip they had referred to as “historic” in the weeks prior as an absolute success. In several sentences blended with machismo attitudes, there were hollow observations about how Erdogan stood his ground against Trump’s regular “I will pull you in” handshake and how Trump touched his shoulder. Trump’s greeting of Erdogan at the door of the White House was also a perfect photo moment for these commentators.

There were others, such as Asli Aydintasbas of daily Cumhuriyet, known for her strongly critical views of Erdogan, who said the meeting was a success for the Turkish president. Aydintasbas said, “Our neighborhood and, in general, media fail to read the trip properly and argue that Erdogan came back home empty-handed.” For evidence, she wrote about Trump’s body language, which she said signaled affection for Erdogan. She said that despite the US commitment to the People's Protection Units (YPG), the United States was also committed to support Turkey in its battle against the Kurdistan Workers Party (PKK).

In all of these arguments, the undercurrent was the pragmatism that Turkey is obliged to work with Trump for at least the next four years, and it is determined to make the best of it.

Hence, the most obvious conclusion was shrewdly ignored: Erdogan’s visit following the official decision to arm the YPG signals that Turkey accepts the US’ decision.

This was not the only crucial fact that the pro-Erdogan media skillfully ignored in order to embellish the importance of a smiling photo-op.

First, let’s evaluate the trip on the basis of protocol and public diplomacy. Did Turkey’s reputation benefit from Erdogan and his men’s presence on US soil? The trip was conducted in two stages. The first one, May 8-10 by Erdogan’s top three bureaucrats, coincided with the Trump administration officially announcing their decision to provide arms to the YPG. Were his top bureaucrats unable to update Erdogan properly about what they were told in Washington? Did they not tell him that even though the Trump administration is different from Obama’s that this might not necessarily be to their benefit? Erdogan made some rather bold statements against the United States prior to his visit. One of them was about putting a “full stop” to the relations and bargaining about the decision on YPG armament. His rhetoric was different during the White House press briefing, saying there could be no “full stops” to the relationship.

Plus, on May 15, the day before the Erdogan-Trump meeting, one of the most prominent newspapers in the United States, The Washington Post, ran a column by Erdogan’s arch enemy, Fethullah Gulen. It is not important whether Gulen’s words carry any weight. What matters is the fact that despite unknown amounts of Turkish taxpayer money — there is no oversight on government spending in Turkey anymore — spent on lobbying against the Gulen movement, the opinion piece did not have a proper rebuttal in the US press. Can we realistically assume the United States considers Gulen a terrorist at this point?

Erdogan was definitely frustrated about the short duration of the meeting and the rushed working lunch afterward. Several commentators in Turkey argued how protocol during the lunch was not followed; for example, Hakan Fidan, the head of Turkish intelligence, did not have his counterpart at the table.

Yet the worst public diplomacy fiasco was in front of the Turkish Embassy in Washington after the Erdogan-Trump meeting. As Al-Monitor promptly reported, members of Erdogan’s security detail attacked protesters. US senators and representatives spoke out against the brawl and demanded the Turkish ambassador be declared persona non grata and his credentials revoked. A similar attack happened during the Obama era as well, but the reaction was not as strong. This time in local news all around the country, it was Erdogan’s thugs who showcased Turkey to America, rather than his meeting with Trump. A video came out May 18 showing Erdogan in front of the embassy watching the attack, leaving one to wonder whether he will be bold in this instance to say “I ordered the attack” as he did against the peaceful Gezi Park protesters in 2013. The pro-AKP press was proud of Erdogan’s bodyguards. Indeed, Erdogan’s security personnel are notorious for attacking protesters all around the globe, thus presenting a brutal face of Turkey that no anti-Turkish lobby could accomplish in one day.

The next point drove the final nail in the coffin of the neo-Ottoman dreams of dominating Syria. Erdogan’s government aspires to get rid of Syrian President Bashar al-Assad, declaring that not even a leaf moves in Syria without their knowledge. Turkey’s last hope, in Erdogan’s delusional world, was for Trump to undo most, if not all, of Obama’s mistakes in Syria. Yet the reality is, the Pentagon’s plans to coordinate with Russia are clearly moving along without Turkey.

On May 18, Deputy Prime Minister Numan Kurtulmus discussed how Turkey needed a new foreign policy perspective during a pro-government nongovernmental organization conference. On May 17, columnist Abdulkadir Selvi, who is known for his close links to senior AKP officials, in a mind-boggling remark, said, “If the situation with the PKK is improved by fall, conditions of [pro-Kurdish] Peoples’ Democratic Party [HDP] members may be re-evaluated.” Currently, the HDP’s two chairpersons and dozens of lawmakers and local leaders are in jail.

All of these signs indicate that Erdogan’s Washington trip, which was cut a day short, will generate low-key but crucial domestic changes to please the Trump administration, such as releasing US pastor Andrew Brunson, allegedly a CIA agent who collaborated with the Gulenists.

When all is said and done, the most crucial argument from pro-AKP lackeys was the affection between Erdogan and Trump, and to that the best answer came from a retired Egyptian general. He told Al-Monitor, “Of course the romance between Erdogan and Trump cannot last longer than 22 minutes. Trump has had his lovefest with [Egyptian President Abdel Fattah al-] Sisi.” Leaving Washington, a few Turkish bureaucrats must have been thinking, “We will be missing Obama in the months to come dearly.” Those who were hosted by the Obama White House must have seen this bitter reality. That might be precisely why the Turkish intel chief’s face was stone cold throughout the lunch.