Erdogan-Trump: The most unsuccessful Washington visit ever

History will record Turkish President Recep Tayyip Erdogan’s recent visit to Washington as the most unsuccessful presidential visit ever to Washington. 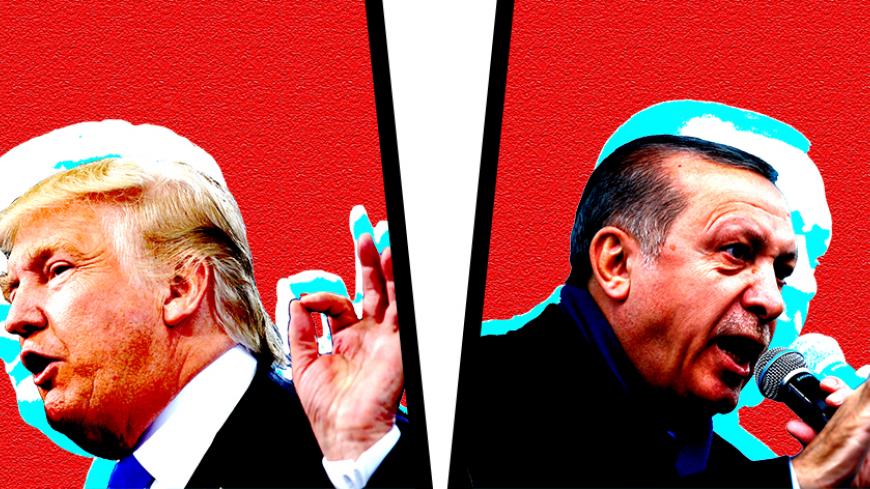 “The mountain gave birth to a mouse” is a well-known Turkish saying for describing the disappointing results after big expectations.

For hours, I had been contemplating whether the White House encounter between US President Donald Trump and Turkish President Recep Tayyip Erdogan can be described by this saying. After all, following a soured relationship between Erdogan and former President Barack Obama, the Turkish president apparently had extended a mea culpa to Trump.

Even Trump signing a decree to directly arm the Syrian Kurdish People’s Protection Units (YPG) could not undo the high hopes pinned for the May 16 White House summit. Erdogan’s reaction had been that when he would come face to face with his American counterpart, he would be able to persuade him to change his mind: The United States under Trump would dump the “terrorist” YPG for its staunch NATO ally, Turkey.

Erdogan’s White House meeting with Trump was trumpeted as a “turning point” in Turkey’s relations with the United States. There are three major issues to assess the success of the visit and thereby come to a conclusion of whether it was a turning point:

In the aftermath of the Trump-Erdogan meeting at the White House, my conclusion is this: The mountain didn’t even give birth to a mouse. It didn’t give birth to anything.

Considering myself a veteran of Turkish visits to the White House, I have to admit that I had never witnessed such a unique visit. In the past, I have been in the Oval Office and in the press room with former Turkish presidents and prime ministers: Turgut Ozal, Tansu Ciller, Suleyman Demirel, Bulent Ecevit and Erdogan. I was also present during Erdogan’s first visit to the White House in December 2002 when he was received by George W. Bush in the Roosevelt Room. I do not remember any meeting that lasted for only 22-23 minutes.

A turning point or a milestone summit between the presidents of Turkey and the United States at a time when their relations are deeply strained, and it lasted only 22 minutes! That means each president spoke around 10 minutes, including the translations, to address the most crucial issues on the international agenda and those concerning their strained bilateral relations.

The 22-minute “turning point” summit was followed by a joint press conference that lasted about the same length, with Trump speaking less than five minutes and saying nothing significant and Erdogan reading a text that reiterated Turkey’s stand on the thorny issues.

“There is no place for the terrorist organizations in the future of our region. Taking YPG and PYD [Democratic Union Party] in the region — taking them into consideration in the region, it will never be accepted, and it is going to be against a global agreement that we have reached,” Erdogan said.

During the joint press conference, both tried to be cordial to each other, but they were unable to conceal the mundane atmosphere dominating the Roosevelt Room where the joint press conference was held. While Erdogan was talking, Trump’s body language gave the impression that he was somewhere other than next to his Turkish counterpart. Perhaps his mind was busy with the scandal reigning in Washington about his disclosure of classified information to Russian Foreign Minister Sergey Lavrov. Untypically, the two leaders did not receive any questions from the crowded press corps.

Nobody from the American media was really interested in the divergences between Turkey and the United States, and they behaved as if the president of Turkey was not in the room. Interestingly, during the press conference, the discrepancy in Erdogan’s Turkish and the English translation that Trump heard was noted and circulated on social media within an hour. That means what Trump heard in English was different in meaning or what Erdogan intended to mean.

The scandalous part of the visit was not confined to the translation of the joint press conference. Kurdish-American activists were holding a demonstration at the Turkish ambassador’s residence to protest Erdogan’s visit to Washington, and it turned into a battleground when Erdogan’s bodyguards and his supporters attacked the demonstrators. Nine people were wounded, and American police had difficulty taking control of the situation.

The joint press conference was followed by a working lunch where the delegations took part. After the lunch, Erdogan’s visit — which was advertised by his team as “a turning point” in Turkish-American relations — ended.

I do not remember there ever being a visit of a Turkish president or a prime minister whose one on one with the American president lasted only 20 minutes, was followed by a joint press conference and a lunch with the delegations, but no questions from the press were asked. The Erdogan-Trump meeting is unprecedented in this regard.

In terms of the three main stumbling blocks on the road of Turkish-American relations, none of them look to be removed. The state of relations is not much different prior to Erdogan’s visit to Washington.

Before coming to Washington, Erdogan met with almost all of the major nationalists/autocrats in the international system — Vladimir Putin of Russia, Narendra Modi of India and Xi Jinping of China. But he needed to get the endorsement of the leader of the strongest nation in the world, the president of the United States of America. However, luck was not on Erdogan’s side this time. Erdogan arrived in Washington from China at a very peculiar period when a scandal involving Trump that put his presidency at stake became the order of the day in the US capital.

Trump and his team had neither time for Erdogan nor the appetite to meet his demands. The official Turkish statement on the Erdogan-Trump talks was issued by Erdogan spokesman Ibrahim Kalin. It only consists of four sentences. There is nothing there to suggest that the two countries overcame their deep divides.

Most interesting of all, the White House’s assessment of the meeting with Erdogan, almost diametrically opposed to that of Kalin’s, emphasized the incarceration of Pastor Andrew Brunson, which was not mentioned by the Turkish side at all.

The White House issued this readout of the meeting: “President Donald J. Trump met today with President Recep Tayyip Erdogan of Turkey to discuss how to further strengthen the deep and diverse relationship between our two countries. President Trump reiterated the commitment of the United States to the security of our NATO ally Turkey and the need to work together to confront terrorism in all its forms. President Trump raised the incarceration of Pastor Andrew Brunson and asked that the Turkish government expeditiously return him to the United States. President Trump told President Erdogan that he looks forward to seeing him next week during his upcoming international travel.”

Most probably, history will record Erdogan’s recent visit as the most unsuccessful presidential visit ever to Washington.