Erdogan’s advisers are among those predicting his mission in Washington will fail. 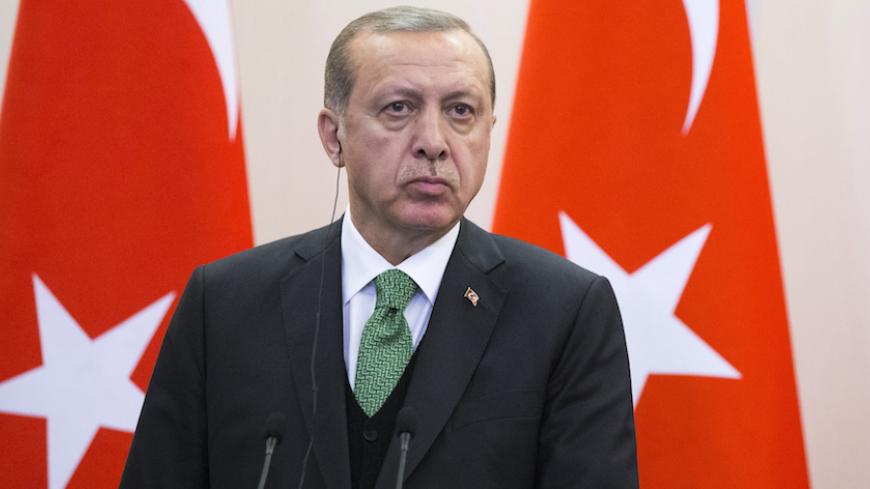 Omens for the long-awaited meeting between President Recep Tayyip Erdogan and President Donald Trump at the White House on May 16 do not bode well. Despite the smiles both leaders will no doubt have for the cameras, all the signs are that their talks will be tough.

There is no indication that issues that have strained ties will be resolved with this visit. Erdogan’s closest advisers are also pessimistic about a successful outcome, while some observers argue that this could be the “make-or-break moment” for Turkish-US ties.

Erdogan’s delight when Trump turned out to be the only Western leader congratulating him on his recent referendum victory — which effectively makes Erdogan Turkey’s unquestioned leader — could, therefore, turn out to be short-lived.

Erdogan will travel to Washington with demands that are non-negotiable, leaving little room for diplomatic maneuvering. He has not only given advance notice of his intentions, but he has also sent personal adviser Ibrahim Kalin, head of Turkish Intelligence Hakan Fidan, Chief of the General Staff Gen. Hulusi Akar and Justice Minister Bekir Bozdag to prepare the groundwork.

The composition of this team already points to the issues at stake. Foremost among these is Ankara’s insistence that the United States sever its ties with the Kurdish People's Protection Units (YPG), Washington’s ally in the fight against the Islamic State (IS) in Syria.

Turkey insists that this Kurdish group is a terrorist organization but has failed to convince Washington and other members of the US-led coalition against IS. It has also failed to convince Russia, which is also cooperating with the YPG in Syria.

To the contrary, Washington and Moscow — despite their many disagreements over Syria — closed ranks with the YPG after Turkey’s recent deadly airstrike against the group in northern Syria. That strike elicited a reprimand from Washington and Moscow, with both characterizing it as “unacceptable.”

On May 9, the Pentagon announced the Trump had approved supplying arms to YPG fighters as part of an operation to retake Raqqa.

Erdogan’s second major demand will be the extradition of Fethullah Gulen, the self-exiled Islamic cleric who resides in Pennsylvania and whom Erdogan accuses of masterminding last year's failed coup against him.

The United States remains unconvinced of Turkish claims against Gulen, despite “the stacks of evidence” Ankara says it has provided. There is no indication that Erdogan will be any more successful during his visit, especially when the massive dragnet against alleged Gulen supporters continues unabated in Turkey on the basis of charges that legal experts argue would not stand up in a US court.

This campaign — which is also criticized strongly by independent Turkish analysts — is expected to strengthen the hand of Gulen’s legal team and make it harder for Trump to make an executive decision regarding Gulen’s extradition.

None of this has deterred Erdogan from upping the ante prior to traveling to Washington, though. He told reporters before flying to India last week that he would put pictures and video footage in front of Trump showing American flags and YPG banners (which he referred to as “rags”) flying side by side, while US Marines and YPG fighters stood guard together.

“We will, of course, show these to the president during our visit on [May 16] and ask him what this is all about if we are partners against international terrorism,” Erdogan said. He added that Turkey, a NATO ally, was deeply disturbed by this.

Erdogan added defiantly that Turkish strikes against the YPG would continue regardless of what anyone said about these. Aiming his words at the YPG, he said, “We can come unexpectedly some night,” adding, “Let them live in fear.”

Turkish press reports indicate that Erdogan’s advance team in Washington was also lobbying hard to get the United States to come around to Ankara’s position on this topic. A diplomat talking to Al-Monitor on condition of anonymity claimed, however, that this approach could prove to be counterproductive for Ankara.

“The recent strike against the YPG might have been designed to concentrate minds in Washington before Erdogan’s visit, but it probably cast a shadow over the talks in advance,” the diplomat said.

Ilnur Cevik, who advises Erdogan on foreign policy, is also not hopeful about a positive outcome from the Erdogan-Trump talks. Asserting that “bad signals are coming from Washington,” Cevik argued that the US Central Command had convinced Trump’s inner circle that the fight against IS can only be carried out with the YPG.

Turkey is offering to participate in the operation to liberate the IS stronghold of Raqqa, together with fighters from the Free Syrian Army (FSA) that it supports, provided the YPG is excluded.

Turkish and FSA fighters fought side by side in northern Syria against IS under Turkey’s Operation Euphrates Shield, with some air support from the United States.

Cevik claimed in his column in Yeni Birlik that US generals who say the FSA has not proved itself on the battlefield “are trying to cast a shadow over our successes in Syria by lying to Trump and his men.”

Ufuk Ulutas, a columnist for Aksam and foreign policy director for the government-supported Political Economic and Social Research Foundation, believes Trump needs a “quick success story in Syria,” which is why he is pushing hard to liberate Raqqa with YPG support.

Ulutas says this reveals a lack of long-term planning by Trump, and he reasons that even if Raqqa is liberated in this way, terrorism will increase there, as will US losses.

“The US ruined Iraq. Turkey’s biggest agenda item [during Erdogan’s visit] will be to try and ensure the US does not repeat the mistakes it made in Iraq in Syria,” Ulutas said in his column.

“A US acting without Turkey will only fuel terrorism and expand Iranian influence,” Ulutas argued.

The possibility of increased US-Russian cooperation in Syria following the recent phone conversation between Trump and Russian President Vladimir Putin could pose another complication for Erdogan.

Russian Foreign Minister Sergey Lavrov will be in Washington this week for talks with Secretary of State Rex Tillerson about the “de-escalation zones” proposed by Russia, Turkey and Iran. Turkey supports these zones, but it is wary that regions along its borders held by the YPG with US and Russian support might be officially declared safe zones by Washington and Moscow.

This would put these areas out of the reach of Turkish strikes unless Ankara is willing to risk confrontations with Russia and the United States.

The Tillerson-Lavrov meeting, therefore, could turn out to be more significant for Syria than the Erdogan-Trump meeting.

Erdogan still needs to come back from Washington with some kind of success story. Given the way the cards are stacked, though, he could very well end up coming back empty-handed.

Serdar Turgut, who reports for daily Haberturk from Washington, has cited insider information that indicates Erdogan is unlikely to get what he wants regarding the YPG.

Others are arguing that Erdogan’s chances of success regarding the extradition of Gulen also appear slim.

“Our alliance with the US, which has continued for years despite its ups and downs, faces the risk of being severed this time,” Turgut wrote recently.

Erdogan has played his hand and is not open to compromises. The onus, therefore, is on Trump to come up with face-saving formulas for Erdogan while maintaining US policies that are unlikely to change. If this can’t be done, Turkish-US ties will face even more turbulence, as many are already predicting they will.