Decoding the Turkish president's harsh rhetoric on Syria is becoming increasingly difficult as he alienates almost all parties working to end the war. 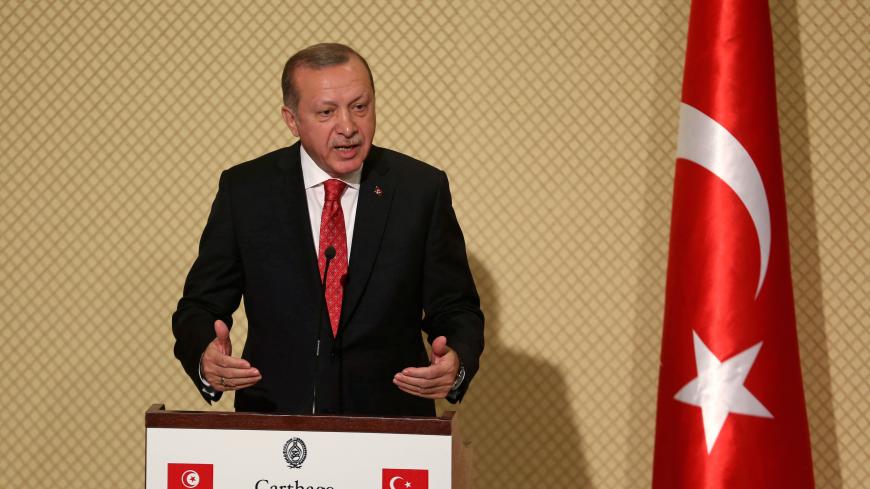 "It is not possible to continue with Assad in Syria," Erdogan said at a Dec. 27 press conference with Tunisian President Beji Caid Essebsi in Tunis. "How can we embrace the future of Syria with a president who has murdered almost 1 million of his own citizens?”

Erdogan’s most striking comment came when he declared Assad a terrorist “who has carried out state terrorism.”

Erdogan’s words did not find much of an echo in the media, even among those outlets that favor his Justice and Development Party (AKP), yet the Syrian and Russian foreign ministries reacted promptly. Syrian authorities asked Erdogan not to meddle in their domestic policies and claimed he is “providing unlimited support to all kinds of terrorist organizations" fighting the Syrian regime. Even pro-AKP journalists such as Sabah columnist Mehmet Barlas concurred with the Syrian Foreign Ministry. On Jan. 2, Barlas wrote that Turkey has supported terrorist organizations in Syria under the pretext of providing aid to opposition groups.

Russian authorities simply dismissed Erdogan’s comments as groundless and having no “legal basis.”

Given that Turkey is involved in both the Syrian National Dialogue Congress coming up in Sochi, Russia, and the talks in Astana, Kazakhstan, with Russia and Iran, observers assumed Erdogan had tacitly agreed to work with the Assad regime. Indeed, there were scenarios of cooperating with Syria against the Kurds, particularly because Assad on Dec. 18 had declared “US-backed Kurdish forces” traitors to the regime. This could have been the grand opportunity for Turkey to pull off a graceful exit from the Syrian quagmire.

The strongest reaction in Turkey was from left-leaning nationalist daily Aydinlik, which ran the headline “Erdogan threw a stick of dynamite into the regional alliance!”

Al-Monitor asked prominent academics, policy wonks and senior bureaucrats in Ankara why Erdogan is rocking the boat. Our inquiry started prior to Erdogan’s increasingly aggressive rhetoric against Afrin in Syria and the strained diplomatic communications between Turkey and Iran and Russia. The explanations we compiled are not necessarily complementary and in some instances contradict each other. Yet this is crucial in understanding how difficult it has become to decipher Erdogan’s intentions as he muddles through — and seemingly contributes to — one crisis after another.

Our findings are as follows. Most of the academics struggled to rationalize Erdogan’s blast on Assad in Tunis. One possible argument was that he wanted to please Saudi Arabia. Turkish-Saudi relations have been on the rocks, with Erdogan and pro-AKP media lambasting the Saudis for their ties with Israel. On the same day that Erdogan criticized Assad, Turkish Prime Minister Binali Yildirim was en route to Saudi Arabia to meet the king. Interestingly, the media's bold anti-Saudi stance abruptly halted after Yildirim's visit.

Another argument, brought up by a senior bureaucrat who spoke on condition of anonymity, was that Erdogan is testing the waters to see “who is still against Assad.” Tunisia is the No. 1 supplier of fighters to the Islamic State (IS) and other militant Salafi groups, and it is now dealing with thousands returning home.

“Erdogan was hoping to re-trigger anti-Assad feelings among Tunisians and beyond. How about the US? Are they happy with Assad’s survival? Now that IS is almost defeated, can we do away with Assad?” the bureaucrat said in trying to explain Erdogan’s sudden anger against Assad.

Erdogan has struggled to combine his anti-Assad message with the Rabia salute, a hand gesture used by supporters of the Muslim Brotherhood. Essebsi warned him against using the gesture in Tunisia.

A political science professor at a prestigious college in Istanbul, who also asked to remain anonymous, provided a different perspective: “Erdogan and his [advisers] fear regional and international isolation. In Turkey, his trips to France and Africa are seen as shopping sprees rather than diplomatic achievements. Despite … a great reception of the Turkish delegation in Sudan, at the end of the day Erdogan is aware he is being hosted by a deeply isolated dictator. So by lashing out against Assad, in a sense Erdogan is also telling the West, 'You have failed to replace Assad as you promised us in 2011.'"

The most striking answer to our question came from a security official who insisted that there could be no Turkish alliance with Syria against the Kurds. He argued, “Assad is only fighting the rebels, but not the Kurds. Therefore, the Turkish government feels strongly that it will have to take matters into its own hands. There is also the concern that the Kurdish People's Protection Units (YPG) may attend the talks in Sochi, Russia, planned for the end of January. For months, pro-government media have been portraying peace talks without YPG or Assad as an AKP victory."

Although Erdogan had declared Assad unfit to be the leader of Syria, intriguingly, Turkish bureaucrats and security officials focused exclusively on the dangers of the Kurdistan Workers Party (PKK) and the YPG during our interviews between Dec. 27 and Dec. 31.

On Jan. 14, after several speeches in which Erdogan repeated a line from a popular song, “We may suddenly come one night,” he told a sympathetic audience in Tokat province, “The knife is now hitting the bone. Our state does not have another minute to spare for delaying tactics. As a country, we will destroy all organizations that threaten our national security and the safety of our people at their source.” Then Erdogan clarified that the campaign “to cleanse our southern border from terrorists” — which started with Operation Euphrates Shield, Turkey's military intervention in Syria that ran from August 2016 to March 2017 — will continue with Afrin. Erdogan’s attack announcement came as journalists in Afrin reported skirmishes between Turkish Armed Forces and the YPG.

If Turkish military engagement in Afrin deepens, could Turkey expect support from NATO, or Russia and Iran? Would this operation help decrease Turkey’s security vulnerabilities at a reasonable cost? Would it destroy the PKK, a terrorist organization that has survived four decades? Would it bring peace with the Kurds? Several Kurdish politicians warn that Turkish military involvement in Afrin would wreak havoc in Turkey. For example, Ayhan Bilgen, spokesperson for pro-Kurdish Peoples' Democratic Party (HDP) tweeted, “If there is a [Turkish] operation against Afrin without an attack from Afrin on Turkey, [it] would lead [Turkey] to civil war if it is successful. If it is unsuccessful, [it would] create grounds for a coup.”

An Afrin operation might not generate either war or a coup, but Erdogan’s portrayal of an easy war against Kurdish forces in Syria is unrealistic at best. Whether this is the right kind of battle to curb PKK terrorism in Turkey is a crucial matter that's no longer discussed in Ankara. So far, Turkey has been paying an untold price for the willful blindness of Erdogan's administration. Although several pundits claimed Turkey’s policies in Syria would change course after Prime Minister Ahmet Davutoglu was forced to leave his post in May 2016, we see that's not the case.

Yet, it is important to see Erdogan is simply too scared of appearing weak to accept defeat in Syria. Hence, charging against all forces involved in Syria — while labeling Assad, the weakest in the chain of command, a terrorist — is seen in Ankara as a valid strategy. Ankara has been afflicted by too many crises in the past six years, and each time, Erdogan and his camarilla have dangerously tested the grounds with further provocation on both domestic and regional grounds. Turkey is always in crisis with one or more countries or terrorist organizations. When the crisis that is supposed to be temporary becomes permanent, people cease to believe in the urgency of potential threats. There are no longer individual crises in Turkey, but rather a deepening process of international isolation and domestic institutional corrosion. In the meantime, Erdogan’s desperate search for a credible enemy continues with erratic rhetoric.