Will US-Kurdish deal force Turkey back to PKK negotiation table?

As Turkey's conflict with the PKK drags on and the United States has made obvious its support for Syria's Kurds, now would be an opportune time to restart negotiations with the PKK. 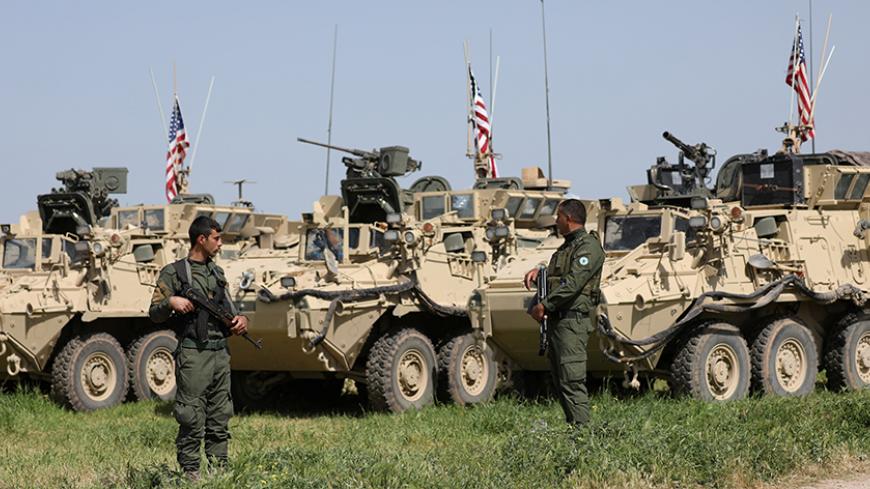 Kurdish fighters from the People's Protection Units (YPG) stand near US military vehicles in the town of Darbasiya next to the Turkish border, Syria, April 29, 2017. - REUTERS/Rodi Said

Although the United States has signaled its increasing support for the Kurdish People’s Protection Units (YPG) for the last few years, US President Donald Trump’s decision to arm the Kurdish forces in Syria for the battle against the Islamic State came as a shock to the Turkish government. Turkey considers the YPG and the Kurdistan Workers Party (PKK) to be part of one common terror group, and President Recep Tayyip Erdogan has been throwing tantrums over symbols of US support for the YPG.

Turkey’s involvement in the Syrian conflict for the last six years has been mind-boggling. To put it in the simplest of terms: It has lacked a proper strategy. One cannot pinpoint what the Turkish goals were in Syria. The Turks wanted to set the rules of the game in Syria. However, while struggling to adjust their reactive policies against all forces involved, they gained more enemies and incurred unknown amounts of financial loss throughout the process. Turkey wanted the United States to be involved, to establish no-fly zones, and Erdogan cheered each and every time the US president spoke against Syrian President Bashar al-Assad.

In 2012 for example, Turkey demanded that Assad grant more rights and freedoms to the Kurds, but today different sections of Kurds in compartmentalized parts of Syria receive logistics support from Iran, Russia and the United States, and the Turks are not happy. So Turkey demands to send its troops, volunteering more of its own men to die. The payback for the last six years’ mistakes in Syria is due now with interest.

Prior to Erdogan’s much anticipated May 16 visit to Washington, a high-level Turkish delegation (Erdogan’s spokesman Ibrahim Kalin, director of national intelligence Hakan Fidan and Chief of General Staff Gen. Hulusi Akar) conducted talks with senior US officials. Despite all efforts of the pro-AKP lackeys to play up Trump’s brief greeting to the delegation, the mood was somber. The final blow came with the official news of the US military support for the Kurds. The Turkish government oscillated between ignoring the news and blaming it on the Barack Obama administration, hoping to ride the Trump administration’s anti-Obama tide. But it is too late for that.

The United States decided to arm the Kurds for several reasons, but for the Turkish side, two reasons are the most daunting: The Turkish Armed Forces in Syria are perceived as less competent than the Kurdish groups, and Erdogan is losing power and credibility. Given modern Turkish history, Erdogan’s biggest fear for decades has been a potential military coup. Different legal cases against high-ranking, active-duty officers have crippled the military’s morale, and the July 15 attempted coup has demoralized and structurally weakened the armed forces. Its operations in Syria have not produced impressive results, and the United States’ choice to support the Kurds proves the point.

Next is the undeniable Erdogan problem. Erdogan rushed into the referendum that grants him unprecedented power. Ironically, the process that expanded his powers legally has indeed crippled his legitimacy. Despite all the victory speeches, the AKP’s top leadership can see that Erdogan is in a deep crisis. For the first time in the last 15 years, Erdogan has lost all major cities, including the most important one: Istanbul. Plus Erdogan is losing the young urban vote. This issue is a top priority in Erdogan’s mind.

With fast diminishing support at home, Erdogan needs Trump’s endorsement more than ever. That is precisely why Erdogan’s reaction to the news was measured, cool-headed and calm. He said on May 12, “It is my sincere wish that before I arrive in the US, the decision [to arm the Kurdish forces] will be changed. I will share our concerns with Trump.” However, not only is Turkey’s credibility in the international arena tarnished, but Erdogan’s bargaining power is at its lowest. Erdogan cannot afford to confront Trump, and the United States knows well how weak the Turkish hand is at this stage in the game. Erdogan’s dubious victory may enable him to grab all possible powers domestically, but in the international realm, he is seen as a leader whose dependence on foreign powers is increasing at a menacing pace. That is the dilemma of a dictatorship in the developing world: The stronger you become domestically, the more vulnerable you are internationally.

Despite a few critical voices in Turkey asking Erdogan not to visit Washington, the Islamists and ultra-nationalists have opted to remain quiet. Now, much will depend on how Erdogan is received in the United States. If there are photo-ops where Trump appears as a friend of Erdogan, this Kurdish fiasco can go down more smoothly for Erdogan. Al-Monitor’s talks with senior Turkish bureaucrats indicate that the best scenario for the Erdogan-Trump relationship will be one similar to the Putin-Erdogan relationship, where the details of the deals are not leaked to the press.

Next is the question of what Turkey will do. Two options are being discussed. One is the spoiler role, where Turkey continues to attack PKK and YPG bases in self-defense. This is not a sustainable policy, not only because Turkey lacks the power but mostly due to the dictatorship dilemma explained above.

So the more likely possibility is reopening the peace talks with the PKK. The backdoor channels have always been in the works to convince Turkey to come back to the negotiation table with the Kurds. However, Turkish prerequisites to reopen the talks have simply been too high for the Kurds to meet. Now, with each blow sustained as a consequence of years of unsuccessful policies, the Turks will be going back to talks with the PKK with a much weaker hand. Erdogan has opted to form alliances with Turkish Hezbollah (Huda-Par, a pro-Kurdish Sunni Party), which is adamantly against the PKK, and the Gray Wolves, who have held him in check against a rapprochement with the Kurds. But now that the referendum is over, who can hold Erdogan back?

As a savvy leader, Erdogan will soon start preparing another road map and initiate peace talks with the PKK. Potential collateral damage to this path may be a few senior bureaucrats who had their hearts and minds set on the taking down of prominent PKK leaders and ending the PKK threat completely. A few forced departures from senior AKP ranks are likely to happen, which will eventually isolate Erdogan further in his policy cocoon.

Yet Erdogan knows all too well that the Kurdish problem cannot be solved exclusively in military terms. Hence, he was the one who haphazardly announced the peace process with the Kurds in 2012. On March 21, 2013, all pro-AKP figures were singing Kurdish songs, rejoicing about the peace with the PKK with the slogan “Mothers should not shed any more tears.” Red, green and yellow were the colors in fashion. And in the same unexpected fashion, the process ended in 2015, and now calling for peace in Turkey has become a criminal act.

This is all likely to change rather soon. This time Turkey has lost significant bargaining power, while the Kurds seem to have played a shrewd game of balancing the interests and sensitivities of Iran, Russia and the United States. Watching and listening to Turkish pundits and senior bureaucrats, one cannot help but see that the alternative news reporting and spinning the reality for public opinion has done permanent damage to Turkish policymakers. They have come to believe their own alternative truths. However, the accumulated bills from six years of reckless policies in Syria are soon to be collected without further delay from Turkey.