Why did Erdogan's bodyguards beat up these Ecuadorian women?

No country is spared from Turkish President Recep Tayyip Erdogan’s anger, not even Ecuador, raising questions about whether he can speak to unvetted audiences. 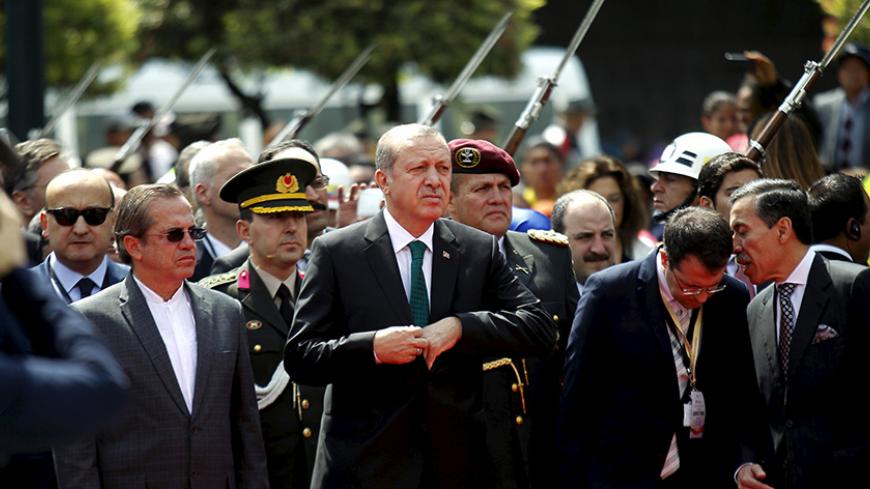 Turkish President Recep Tayyip Erdogan embarked on a Latin America trip between Jan. 31 and Feb. 4. The main goal of his trip was to expand trade relations with Chile, Peru and Ecuador. On Feb. 4, Erdogan gave a speech at the Instituto de Altos Estudios Nacionales (National Higher Studies Institute) in Ecuador’s capital, Quito. During his speech, a group of female protesters were heard screaming “Fuera Ecuador Erdogan” ("Get out of Ecuador, Erdogan") and "Asesino" ("Murderer"). Some of the protesters had "asesino" written on their hands as well. Their protest lasted less than a minute before they were brutally attacked by Erdogan's Turkish bodyguards. The women were forcefully removed from the room and claimed to have been assaulted; the bodyguards punched their heads, vaginas and breasts. As the female protesters were being dragged out of the auditorium, Erdogan said, “As we see now, there are sometimes disrespectful characters as well. Appropriate responses will always be taken to handle these disrespectful people.”

Outside the building, a larger group of demonstrators had gathered to protest Erdogan’s visit. Their banners read, “Erdogan loves IS [Islamic State]” and “Erdogan Kills in Syria,” while others expressed solidarity with the Kurds. The guards attacked this group as well, breaking the nose of an Ecuadorian lawmaker, Diego Vintimilla. Vintimilla posted photos of his injuries on Twitter. Social media users retweeted it and he received hundreds of supportive messages from Turkey.

The news became a trending topic for the next couple of days in Turkey, with hundreds of entries on social media. However, most of the mainstream TV channels and pro-government newspapers did not even mention the events or show images of the protests. Both in Turkey and in Ecuador caricatures were drawn ridiculing Erdogan’s aggressive bodyguards. Girgir, one of Turkey’s most popular satirical magazines featured the event on its cover, with Erdogan wearing boxing gloves asking not just Turks but the entire world to remain silent. On Twitter, #ErdoganAsesino, #HeilHitlerdogan and #DirenQuito (Resist Quito) became trending hashtags. A few critical Turkish pundits carried this sensitive incident to their columns. One was Hayko Bagdat’s humorous piece for the Diken website titled “To us everywhere is Kasimpasa.” Kasimpasa is a district of Istanbul where Erdogan grew up. It is known for tough and standoffish men ready to confront anyone and everyone.

A satirical column for Daily Zaman was penned by Turan Alkan titled “Who is the biggest parallel: Ecuador,” referring to the nickname for the Gulen movement members. Alkan ridiculed several instances of doublespeak by Justice and Development Party (AKP) elites, and then he indicated that due to Ecuador’s location it must be the place for all Gulen movement members to escape to.

In the meantime, Ecuadorian Deputy Foreign Minister Fernando Yepez summoned Korkut Gurgen, the Turkish ambassador in Quito, demanding an answer about the excessive use of force by the Turkish bodyguards. Ecuadorian Interior Minister Jose Serrano said they had requested the bodyguards to surrender their passports on Feb. 5, but the Turkish delegation had already departed Ecuador en route to Senegal.

At the same time, several Ecuadorian pundits are both upset with Erdogan and displeased with their own leaders. Cristina Burneo Salazar, a professor at Simon Bolivar Andean University of Quito, wrote a searing piece stating that “Erdogan should have never been invited to speak at a university,” explaining how the original location, La Universidad Central, had rejected to host Erdogan. Salazar’s piece has in-depth details about the AKP’s track record on human rights and disrespect of women. She even mentions Bulent Arinc’s notorious comment advising women not to laugh loudly in public.

A group of Turkish businessmen living in Ecuador have announced they will sue the six female protesters who were brutally beaten by Erdogan's bodyguards. They allegedly said that “these unidentified women entered the lecture hall and called our president a murderer.”

For the people in Turkey, however, the intriguing part was not the aggression against unarmed protesters in Ecuador. After all, in the last couple of years, Turks have witnessed the violent suppression of almost all anti-government protests. Even sporadic protests against Erdogan and his men have met with extreme aggressive reactions in public, with little to no legal repercussions for the instigators. Indeed, Freedom House recently announced that on average there are four court cases initiated every day for the crime of “offending Erdogan” in Turkey.

For Turkish audiences, the real surprise was that a government that came to power with the slogan “zero problems with neighbors” has not only managed to increase friction and conflict with almost all neighbors simultaneously, but also for the first time in Turkish history managed to generate a diplomatic crisis between Ecuador and Turkey. One tweet put it succinctly: “If he [Erdogan] manages to be a problem in Ecuador, no wonder he is a problem in Syria.” In a humorous approach, most Turks were asking if the Ecuadorian protesters were Kurds or Gulenists, and what kind of traitors were they that they failed to respect the “world leader.”

Beyond all these recurring scenes of violent attacks and angry outbursts of AKP members lies a lack of tolerance for dissent. The intolerance level is increasing at an alarming rate, due to what might be called a “preaching to the converted” syndrome. Erdogan and almost all AKP elites, including Prime Minister Ahmet Davutoglu, do not appear before random crowds; all press interviews are exclusively conducted by pro-government members of the media.

Erdogan’s latest favorite audience has been the mukhtars (leaders of neighborhoods and villages) who are vetted rigorously prior to being accepted into the palace. They dutifully clap after each sentence Erdogan utters. For instance, on Feb. 10, during the 20th mukhtar gathering at the palace, Erdogan complained about the alleged US support for the Kurdish troops in Syria while mukhtars cheered him on respectfully.

These loyal and controlled audiences are much more difficult to assemble in foreign countries. In Turkey, the opposition is a feeble voice whose questions are not taken into account.

In regard to Erdogan's visit to Ecuador, scholars such as Aylin Topal, a Latin America expert and professor of political science at the Middle East Technical University, have argued that the lawsuits against Erdogan’s bodyguards have taken the forefront of the trade agreements signed between Ecuador and Turkey. Yet Ecuadorian activists have expressed their disappointment with their own government for sacrificing human rights in exchange for strengthening trade relations. Indeed, Miguel Molina Diaz, Quito-based journalist and editor, argues that the covering of the nude statues during Iranian President Hassan Rouhani’s visit to Italy was less offensive than what Erdogan’s entourage did against the Ecuadorians and sovereignty due to the Ecuadorian government’s submission to Erdogan.

The financial consequences of Erdogan’s Latin America tour will most likely not be felt in Turkey in the short run. Yet the excessive use of force by Erdogan’s bodyguards’ (allegedly there were 70 of them) in Ecuador have reconfirmed two facts: First, whenever Erdogan cannot preach to the "converted," he is out of his comfort zone and surprising events are likely to happen. Second, as one of the Ecuadorian protesters, Karla Kalapaqui, told Al-Monitor, “Turkish and Kurdish women everywhere are very brave.” They are indeed!