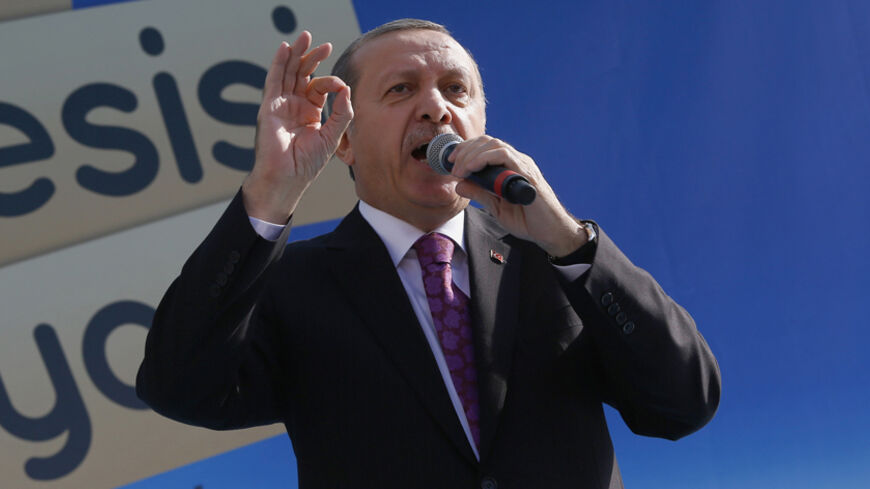 You have to hand it to Turkish President Recep Tayyip Erdogan. He has a knack for turning a non-consequential, perhaps even boring, gathering into mind-boggling global news. On Nov. 15, Erdogan gave a closing speech at the Latin American Muslim Leaders Summit in Istanbul. Not even 10 minutes into his speech, Erdogan said: “The introduction of Islam into the American continent dates back to the 12th century. It is claimed that [Christopher] Columbus discovered the continent in 1492. However, 314 years before Columbus, in 1178, Muslim sailors reached the American continent. Indeed, in Columbus’ diaries there is a reference to a mosque on a hill near the sea shore. We can have a talk with my Cuban brother here [referring to the delegate from Cuba to the summit]. A mosque would suit well on that hill today, if they allow it.”

The audience is seen clapping with enthusiasm as the camera focuses on some delegates with big grins. While I was watching it live, I thought Erdogan's comment was a joke in the spirit of the moment. Yet, Erdogan was serious.

He went on the say: “So, before Columbus arrived, Islam was established and spreading across the American continent. We must also emphasize that Islam as a religion was never a tool of colonialism, abuse or slavery. While others have used their religion to subdue people, Islamic states have only been after conquering their souls.” Though his speech was not yet complete, Erdogan’s remarks on the Muslim conquest of the Americas had already made the headlines of major domestic and foreign news agencies.

The initial reactions were humorous. Some viewers tweeted the news with a warning note: “This is not a joke.” Another wrote: “Maybe … somebody gave Erdogan a copy of Sindbad The Sailor and he misunderstood it? One commented: “This is what happens when you turn off the Internet.”

Reactions grew more serious in the following days. Law professor Timucin Koprulu tweeted: “An angry reader of El Pais [Spanish newspaper] comments: ‘I will not be surprised if Erdogan said that Don Quixote was written by Muslims.’”

Satire magazines dedicated their front pages to Erdogan’s ability to rewrite history. One redesigned the Mona Lisa with mosques in the background.

As pundits tried to make sense of Erdogan's words, another revelation arrived that was simply too much for many Turks to accept. A prominent Islamist writer, Abdurrahman Dilipak, from Yeni Akit Daily, tweeted Nov. 17: “There were redskin [Native American] brides in Istanbul long before Columbus arrived in the Americas.” Dilipak insisted on the truth of his claim and further developed his argument, stating that Columbus had two guides from Istanbul on his ship. Dilipak was mocked with not so polite words. One of the nicer tweets read: “Soon Dilipak will start seeing the Smurfs.”

As many sane and sober Turks were hoping that a credible historian would appear on the news and clarify the situation and pro-Justice and Development Party (AKP) media would skillfully move their focus to other issues, it only got worse. Many anonymous troll accounts in support of the AKP struggled to find support for Erdogan’s statements. Some found books on Amazon about Chinese sailors' tales of their discovery of the Americas from the 1420s and about the writings of one of Erdogan’s favorite historians, 90-year-old Fuat Sezgin, who has claimed that Muslim seafarers charted the Americas well before Columbus. They wrote about how happy Cuban Muslims have been to hear Erdogan’s offer and how much Cuba is in need of a mosque.

On the other hand, critics of Erdogan initiated an amusing chat on social media about Erdogan’s soon-to-be-built-mosque in Cuba, with photos of AKP ministers dressed as imams, Cuban cigars, Che Guevara and Fidel Castro photos.

A sampling of tweets:

Yet, how can we explain how Erdogan reads and in a sense rewrites history? A distinguished attorney and author, Erdal Dogan, provided a comprehensive explanation for Al-Monitor: “Although Erdogan presents history through Islamic lenses, we must acknowledge the 100 years of Turkish nationalism behind this mindset. For some reason, the conquest of the Americas mesmerizes both Turkic and Islamist audiences. For decades, Turkish ultranationalists struggled to Turkify everyone in Turkey. However, that was not sufficient. They even declared the Native Americans as Turkish. Now this has taken an Islamic turn.”

Indeed, Dogan had highlighted a crucial point. On Nov. 18, a defiant Erdogan told the media that he observed the outburst of sneering, particularly domestic, and said: “It is because of their lack of self-confidence. They fail to believe Muslims could have discovered the Americas.” Erdogan also said: “Those who believe in Western sources as if they are sacred only denigrate themselves. Our mission is to voice the real facts of history.” Erdogan was quick to announce that he has already instructed the Education Ministry to include the Muslim conquest of the Americas in the school curriculum.

So with these updates, will Turkish schoolchildren be learning their history from proper sources? Patrick J. Geary, a professor at the Institute for Advanced Study in Princeton, New Jersey, told Al-Monitor, “Erdogan was not the first to make this silly claim but it must be very embarrassing that an otherwise intelligent president would feel compelled to repeat anything so foolish. We do not have Columbus' full diary of his first expedition and the only version is an abridgment made by Bartolome de Casas. The abridgement of the section concerning Monday, Oct. 29, 1492, describes a river and harbor on the island of Cuba that Columbus sailed past. A standard English translation reads, 'It has beautiful and high mountains like the Peña de los Enamorados, and one of them has on top another little mountain like a pretty mosque.' [The book] 'The Diario of Christopher Columbus's First Voyage to America, 1492-93' has a key phrase, 'a manera de una hermosa mezquita,' that is, like a pretty mosque. There is no possibility that one could translate this passage as stating that there was an actual mosque on the mountain.”

Geary was convinced that “this is an absolutely incorrect misinterpretation of Columbus' diary and is part of a larger attempt to argue that Islam was established in the New World before Columbus, but all of these are as flimsy as Erdogan's text. I am sure that educated Turks and especially the many excellent historians in Turkey are deeply embarrassed by such statements, just as Americans are often embarrassed by some of the foolish things said by our politicians.”

How Erdogan’s comments were perceived around the world was summarized succinctly to Al-Monitor by Ankara-based Italian photojournalist Piero Castellano: “It has been received in the West with thunderous derision, because it sounded not like a metaphor or an inspiration, but like an empty boast.”

Why would Erdogan insist on this issue with so much determination? There are a couple of good reasons. Whenever the going gets tough, it has been Erdogan’s classic approach to stir up Islamic and Turkish identities at the same time. He has masterfully employed this tactic to motivate his base on a mission to protect the Muslim identity. With several embarrassing domestic and foreign policy failures on his doorstep, this debate allows Erdogan not only to muddy the waters, but also to generate support from his loyal core. He made it clear: If you do not believe that Muslims discovered America first before Columbus, you also fail to believe that Muslims can achieve success.

One comment that said it all came from a well-known Middle East analyst in Turkey who didn’t want to be identified. He said: “Good, now that we know who discovered America, we can ask for it back.”