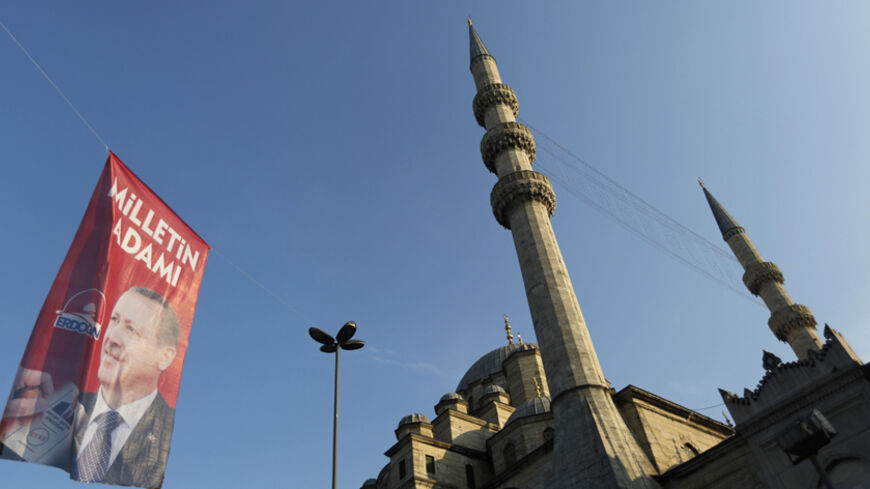 Turkish President Recep Tayyip Erdogan initiated a controversy on Nov. 15 by claiming that “Muslims discovered the Americas three centuries before Christopher Columbus.” Since then, dozens of articles, both in Turkey and abroad, have commented on Erdogan’s claim, often with a tone of sarcasm. However, the reason for Erdogan making this remark, and what it means regarding Turkey’s political past and future, deserves a sober analysis.

Erdogan made the comment during his speech at the “First Latin American Muslim Religious Leaders Summit,” which was organized and hosted by Turkey’s Directorate of Religious Affairs. That Turkey invited 75 Muslim leaders from 40 countries was noteworthy in itself, pointing to the “soft power” Ankara is trying to expand in the broader Muslim world. And this should be encouraged, especially when the alternatives to “Turkey's Islam” can be much more rigid and intolerant interpretations of the faith, such as Salafism.

In his address to his Latin American guests, Erdogan spoke highly about the history of Islamic civilization, arguing, for instance, “You cannot observe colonialism in our history.” His remarks about the Muslim discovery of the Americas was a part of that discourse. He said, “Islam came to Latin America in the 12th century. It is claimed that Columbus discovered America in 1492. Yet, Muslim seamen had reached the American continent 314 years before him in 1178. Christopher Columbus recalls seeing a mosque at the top of a hill at the shores of Cuba in his memoirs. We can discuss this with our brother from Cuba. A mosque will be fitting for that hill today.”

Were Erdogan's remarks completely over the top? Not entirely, as I explained elsewhere, because while “discovery” might not be the right term, it is possible that Muslim sailors might have hit the shores of the New World before Columbus. (Turkish science historian Fuat Sezgin, who teaches at the Johann Wolfgang Goethe University in Germany, infers this possibility from medieval oceanic maps by Muslims in his article “The Pre-Columbian Discovery of the American Continent by Muslim Seafarers.”) But Erdogan’s reference to “a mosque at the top of a hill at the shores of Cuba” was a misquotation. Columbus rather wrote about a hill “in the form of a handsome mosque,” not a mosque at the top of a hill.

What really matters here though is not who really discovered the Americas, but that a political leader is willing to answer that question. Erdogan clarified himself in a follow-up speech, when he not only defended his view about the Muslim discovery of the Americas, but also added, “I have to be clear that there is an important responsibility falling on the shoulders of our Education Ministry and YOK [the Higher Education Board]. An objective writing of history will show the contribution of the East, the Middle East and Islam to the sciences and arts. As the president of my country, I cannot accept that our civilization is inferior to other civilizations.”

What matters here is that, first, we cannot “accept that our civilization is inferior to other civilizations”; second, this is why we have to write our version of history; and third, most importantly, the state should spearhead this historical revision under the auspices of the nation’s leader.

This particular approach to history might sound a bit unusual to Western readers, but it certainly is not too alien to Turks. Turkey’s founder, Mustafa Kemal Ataturk, followed an even bolder version of the same path during his all-powerful presidency between 1923-38. With the aim of countering the then-popular disparagement of Turks and other non-Western peoples in Europe, Ataturk promoted a new theory of history that redefined Turks and their historic homeland in Central Asia as “the cradle of civilization.” Accordingly, pre-historic Turks had built a magnificent civilization in Central Asia, only to disperse to different parts of the world, to become the Sumerians who developed the first alphabet or the Egyptians who built the pyramids. (Ataturk even considered Mu, the mythical lost continent, as the possible homeland of the Turks.) Some Turkish academics, personally promoted by Ataturk, developed these ideas into the “Sun Language Theory,” which is considered as a case pseudoscience. (See more on this matter here.)

What Ataturk wanted to do with this radical historical revision was to boost the self-confidence of the new Turkish nation that he envisioned. In this narrative, pre-Islamic Turkish history was praised, whereas the era of Islam was depicted as backward and oppressive. It nicely fitted into Ataturk’s vision of secular Turkish nationalism.

In comparison to Ataturk, Erdogan is not a secular Turkish nationalist. But arguably he is a Muslim nationalist, feeling strong solidarity with all fellow Muslims in the world and feeling proud of their common civilization. Therefore, the idea that Muslims discovered Columbus, or any theme that will refute the view that “our civilization is inferior to other civilizations,” nicely fits into his vision.

Of course, Erdogan has the right to see the world in the way he does and to promote his views. But I would add two critiques to the historical revisionism that he seems to be undertaking.

First, the re-discovery of the golden age of the Islamic civilization (7th-13th centuries), when Muslims indeed had many advances and inventions in science, philosophy and medicine, is indeed valuable and important. But even more crucial is to question why this brilliant era was followed by stagnation — as dogmatism replaced reason and insularity replaced cosmopolitanism. Unless the “why we declined” question is seriously addressed, boasting of past glory will not help Muslims much.

Second, Erdogan can indeed make a contribution to Turkish academia by increasing its resources, such as supporting institutions that will study the history of the Islamic civilization. However, this will not help much if he does this in the way that Ataturk did — giving the scholars the task of proving a predetermined theory dictated by ideology. In fact, what Turkish academia desperately need is quite the opposite of such impositions by the state: academic freedom. That certainly is lacking, as even former head of YOK Gokhan Cetinsaya noted, “Academics in Turkey are silenced and not able to share with the public what they believe is true.” (Conspicuously enough, Cetinsaya was removed from his post a few weeks after this remark.)

Thus, while Erdogan’s “New Turkey” claims to be a clean break from the “Old Turkey” established by Ataturk, in fact there is some continuity in terms of the ideological nature of the state, and the state’s dominance over society. Both paradigms that underline these two consecutive Turkeys — secularist and Islamist — claim to stand up to the West, and by ways such as reviving a lost glory in history. But both paradigms seem to miss the fundamental secret of the Western success: It is not ideology, it is not state-imposed cultural revolution. It is, first and foremost, freedom.