US Navy's tweet seen as call to battle in Turkey

The US Navy's birthday tweet of a painting depicting one of its first international battles has furious Turks asking what message the United States is trying to send to the Turkish government. 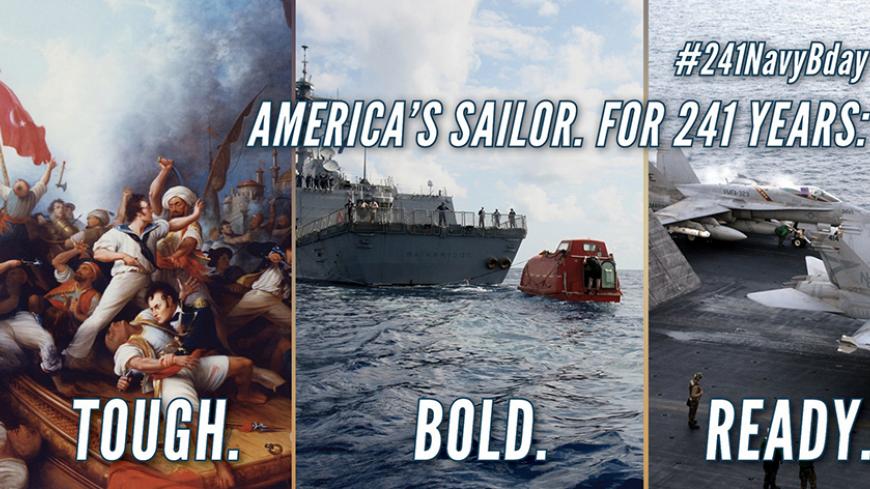 The US Navy celebrated its 241st birthday on Oct. 13 and sent a few tweets to celebrate. However, one was deleted in less than 24 hours. The deleted tweet contained three images of historical navy moments, with the words “America’s Sailor. For 241 Years: Tough. Bold. Ready.” One of the images was a painting, “Decatur Boarding a Tripolitan Gunboat,” done in 1858 by the artist Dennis Malone Carter. The titular event had taken place 54 years before, and the artist had not been present. The historical accuracy of the painting is a topic of debate, but it is of great artistic and patriotic value for the US Navy, which comes from humble origins.

In the battle scene, a red flag is visible with a crescent and star that most likely belong to the Ottoman flag, quite similar to the current Turkish flag. Turkish social media users immediately started attacking the @USNavy account, posting offensive digitally altered imagery and threats. In a few hours, hashtags about the post were trending and several news agencies shared the tweet with rather negative comments, especially those with links to President Recep Tayyip Erdogan and his Justice and Development Party (AKP). For example, leftist Sol Haber Portali announced a “historic message from the US Navy to Erdogan.” The government-controlled Anadolu referred to it as a “scandalous tweet from the US Navy,” pro-AKP Sabah reported an “insolent tweet from the US Navy," saying its "timing is peculiar.” News portals such as T24, known for being critical of the AKP, were more neutral in their coverage of “The US Navy’s tweet with the Turkish flag.” Overall, there was increased anti-Americanism all over Turkish social media, with Twitter trolls harshly criticizing everything American and even threatening the navy with an "Ottoman slap."

Famous figures such as Metin Feyzioglu, a prominent attorney and former president of the Union of Turkish Bar Associations, joined the fray and wrote, “Could the US Navy not find another image in celebration of its birthday? Anyway, Turks come out victorious in that war.”

Other social media users asked questions like: What did the Turks do to you Americans, why share this photo, what kind of a subliminal message does America want to send to Turkey and are we really allies? One senior Turkish bureaucrat quietly told Al-Monitor, “This was perceived as a hidden military threat. Even strategists pondered if this image signals to Turkey, 'If you enter Mosul, we will strike you.' To post an image in which soldiers with Turkish flags die on the US Navy’s birthday celebrations — at such a critical time, when the US and Turkey are struggling to balance relations with [the Kurdistan Workers Party] and the Islamic State — is interpreted on this end as a threat of war.”

Reactions were so strong that the Turkish Foreign Ministry protested the tweet, which was eventually deleted. Al-Monitor contacted the US Navy's press office for answers to the angry Turks’ questions. The office promptly provided the following explanation on Oct. 14: "The graphic posted for the US Navy's 241th birthday reflects key events in our heritage. The graphic uses a portion of a historical painting, by Dennis Malone Carter in 1858, depicting the US Navy engagement with Tripolitan forces in 1804. The flag in the painting was from the Ottoman Empire, which controlled Tripoli at the time. In no way was the graphic directed at Turkey, with whom we enjoy a great deal in common and a longstanding relationship."

The US Navy further explained the circumstances of the events the painting aimed to capture, saying, “The artist chose to use the banner of the nation in control of Tripoli at the time the painting was made in order to help contemporary audiences understand what the event was. The intent of the graphic in which the painting appears is to convey the toughness of American sailors who audaciously sought to right a wrong against an established world power more than 200 years ago. It was certainly not meant as an affront to the people of modern Turkey, with whom we enjoy a great deal in common and a longstanding relationship built on trust and goodwill, much like those of other nations with which we have not always agreed, like Germany, Japan, Spain, the United Kingdom and France.”

Andrew Terrill, a retired professor for the US Army War College, elaborated on the possible reasoning behind sharing that image. He told Al-Monitor, “I am confident no American associates that painting with Turkey. I am also confident that there is no ill will in any American mind to target Turkey through such a tweet. Rather, that painting commemorates an early American hero, Lt. Stephen Decatur, and the first encounters of a young struggling navy. These events date back to our third President Thomas Jefferson’s era, after all.” Terrill emphasized that since the war for independence, US artists have depicted several battles with Britain. Those images are a part of American history and not taken to send any subliminal messages to Britain, so why would Turkey be any different? Even in the lyrics of the Marines' Hymn, which was written in 1942, there is a reference to Tripoli and the Barbary Wars. Is the United States trying to send subliminal messages to Turkey with that hymn as well?

Ryan Gingeras, an associate professor at the Naval Postgraduate School in Monterey, California, understands the Turkish Foreign Ministry's right to protest. He told Al-Monitor, “The Navy's explanation, however, does represent how the event is conventionally viewed in the US. American textbooks universally depict the Barbary Wars as a foundational moment for the Marine Corps and the Navy. The overwhelming majority of Americans arguably do not know that the province of Tripoli was a part of the Ottoman Empire or would find this fact at all relevant with respect to contemporary Turkish-American relations. The fact that commentators in the Turkish press do find it relevant speaks more to the hypersensitivity with which many view the United States at present in Turkey.”

So why are Turks so sensitive about an image? Could we chalk it up to cultural differences? If that is the case, how can we explain the thousands of images Turks spread every year while celebrating the conquest of Istanbul, for example? Is there any sensitivity in those images for Greeks?

Although it's not pleasant, we must question two crucial factors that led to such outbursts in the Turkish social networks. First, there is significant discontent and anger building up in Turkey over domestic and regional politics. Second, US-bashing is not only permissible but rewarded in Turkey. Turks who are not able to repeat a simple joke about their government or even retweet a link to an opinion piece can criticize US policies and actions with no holds barred.

On Oct. 13, the miniscule image of a flag generated thousands of angry tweets, rude comments and threats within a few hours. The Turkish government would be wise to worry more about the potential of such strong outbursts than any subliminal messages attached to a centuries-old painting.