Years of anti-American propaganda help the Turkish president divert blame and discredit damaging news from the West — for example, anything incriminating that might emerge from high-profile cases in the United States involving Iran sanctions. 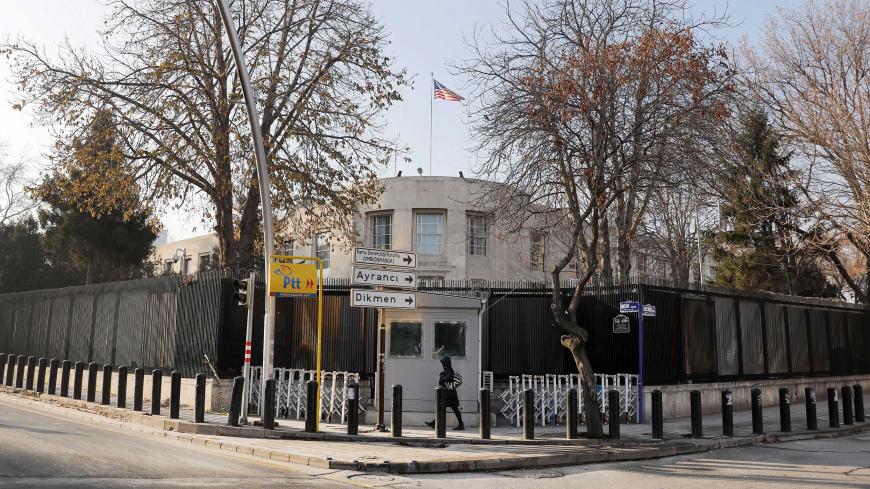 On Oct. 17, a motorcycle parked on the side of the road exploded just as a shuttle bus for police officers was passing by the city of Mersin on Turkey's Mediterranean coast. The remotely activated bomb injured 18 people. The Turkish Radio and Television Supreme Council promptly instituted a gag order on all media coverage of the attack. On Oct. 19, Minister of Development Lutfi Elvan said 11 suspects were taken into custody. Elvan added that early signs indicated the attack was the work of the Kurdistan Workers Party (PKK), which is considered a terrorist group by Turkey and the United States.

The Mersin explosion became a trending topic on social media the day of the attack. One hashtag was particularly telling: #TerrorunAdiABD — "The name of terror is USA."

The hashtag came with potent yet simple images associating the United States with the Islamic State (IS). For example, one tweet said, “The goal is to destroy Islam” and below was an image of a chess board populated with soldiers of IS, al-Qaeda, Boko Haram and the Free Syrian Army being maneuvered by a hand labeled with the US flag.

This was followed by the ultranationalist Aydinlik daily advising readers to consider the Mersin attack and its timing while remembering one of US Ambassador to Turkey John Bass’ departing statements.

On Oct. 11, just four days before Bass left Turkey, he praised the hard work of Turkish security forces and law enforcement and said their cooperation with American and other allies’ networks had prevented IS attacks on Turkish soil for 9½ months. His attempts to show appreciation, to say that the cooperation had direct and positive results, however, were interpreted by the pro-government media at best as a thinly veiled threat.

Bass’ statement was presented as an admission that the United States created and controls IS and, if it wanted to, could allow IS to attack Turkey again.

So the Mersin bus attack, taking place within a week of the ambassador’s words, was a nightmare come true, providing "evidence" to all the conspiracy theory-loving crowds linking the "threat" with the attack. That is how the Aydinlik view was shared on social media, along with other provocative statements.

For example, an anonymous Twitter user who supports the ruling Justice and Development Party (AKP) wrote just after the attack, “The culprits are at the US Embassy! For nine months there were no bomb explosions, so what has happened now?"

Another account shared a short video clip with Bass in the background and red subtitles on the screen reading “Ambassador Threatens Turkey,” with a television host repeating the "no attack in Turkey for the last nine months" line and asking, “So the question now is, did the US have a hand in the previous attacks in Turkey?” The Twitter user added, “Bass said no attack in the last 9½ months in Turkey and left. As soon as he left, a terror attack happens.”

Right after the Mersin attack, social media was tense. However, none of the pro-government newspapers, columnists or advisers of Erdogan and AKP lawmakers openly joined in on “The US is behind the Mersin bombing” conspiracy. And the next day, there were no rallies or protests. This indicates a controlled reaction and once again raises the question of whether public anger and mob attacks are haphazard or manipulated events in contemporary Turkey.

Though the administration chose not to promote the Mersin conspiracy angle, there are still a number of issues with the United States that are weighing on Ankara's nerves. One is the visa crisis — and what is widely considered to be its origin. The Financial Times reported Oct. 9 that the arrest earlier this month of a US consulate employee in Turkey "confirmed suspicions that President Recep Tayyip Erdogan considers US detainees in Turkish prisons as a bargaining chip in its increasingly hostile negotiations with the United States over the extradition of Mr. Gulen and the trial of a Turkish-Iranian citizen with ties to Mr Erdogan’s inner circle."

Since the July 2016 failed coup, the West — most of all the United States — has been portrayed as supporting the Gulen movement, which Turkey blames for the coup attempt. The Turkish government is angry over its failed efforts to extradite the movement’s leader, cleric Fethullah Gulen, who is Turkish but lives in the United States. Turkey also wants to extradite businessman Reza Zarrab and Turkish banker Hakan Atilla, who are currently imprisoned in the United States for allegedly making illegal transactions through US banks to help Iran’s government and other entities in Iran skirt sanctions.

It seems the unpredictability of what might be revealed through the US court cases is a crucial reason behind Ankara’s relentless anger, growing allegations and arrests of US Embassy personnel working in Turkey. Intensified anti-American rhetoric helps to discredit any information flow coming from the United States, thus protecting Erdogan and his inner circle from what they fear might be revealed during the Iran sanctions case. Erdogan has gone to great trouble himself to discredit all things Western. For example, in September he labeled all those who study in the West and return back home as “spies" — even though this group includes all of his own children. On Oct. 21, he declared the United States an “uncivilized” country for issuing arrest warrants for his bodyguards, who are accused of assaulting protesters in the United States.

As Al-Monitor reported in August, US bashing has reached a new peak in Turkey, where potential American suffering is seen as a reason to rejoice. Now, it is reflected in ordinary individuals’ daily lives. Some of these images are captured and shared in celebration or disbelief. For example, one photo from a restaurant appeared on forums after the owner posted signs in Turkish and English saying Americans aren't allowed to eat there. In Samsun province, several barbers have declared they will not cut hair in the style called “American haircut.” (This is the name for a popular cut for men in Turkey where the sides are shaved and the top is spiked. Some barbers instead offer an "Ottoman-style" haircut as an option for those protesting the United States.)

Although these actions were ridiculed on social media, they provide clues about the Turkish mindset. Years of openly and falsely blaming the United States and using profanity against the United States and its representatives on public forums have left a deep mark on Turkish hearts and minds. Even if the two countries resolve their problems smoothly through diplomacy, Turkish distrust of the United States will require years of American efforts to correct.