Turkey, US keep finding ways to vex each other

Amid allegations and at least one arrest, a series of retaliatory moves between Turkey and the United States affected Turkey's currency and raised concern about the countries' relations. 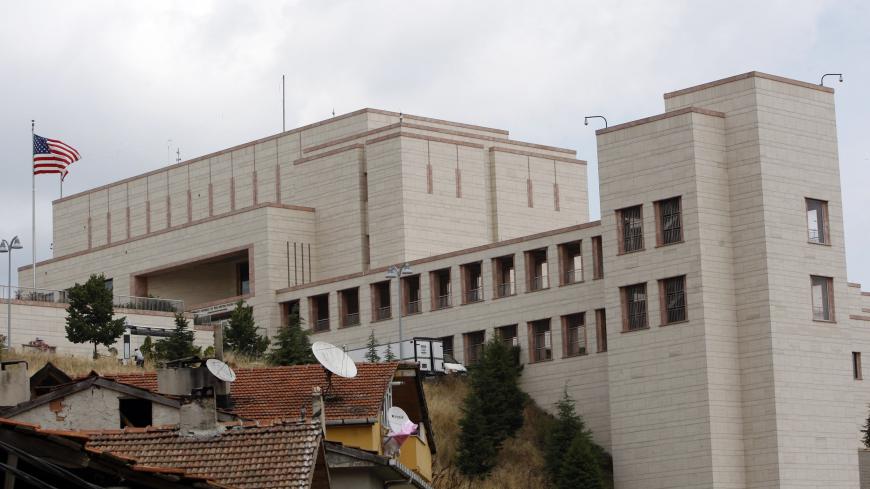 A US flag flutters over the US Consulate in Istanbul, July 9, 2008. The recent arrest of a consulate worker has intensified a row between Ankara and Washington. - REUTERS/Fatih Saribas

A diplomatic row between Turkey and the United States continued to escalate Oct. 9, with Turkish authorities seeking a second US Consulate worker on terrorism charges. According to media reports, the suspect was refusing to leave the consulate Monday afternoon, and authorities were questioning his wife and son. Another consulate employee, Metin Topuz, was arrested last week.

Meanwhile, news of the discord between Turkey and the United States sent the Turkish lira plunging more than 6% Oct. 8 against the US dollar, although it regained much of the loss the following day. This followed the US Embassy's Oct. 8 announcement that said, “Effective immediately, we have suspended all non-immigrant visa services,” and Turkey's in-kind response. It is crucial to note that the first sentence of the statement expressed concerns the US government has about Turkey's commitment to the security of American personnel. This is a strong reprimand that indicates the growing lack of trust among the two longtime NATO allies.

The tit-for-tat exchange began Sept. 25 when Topuz, a Turkish national employed at the US Consulate, was taken into custody and accused of espionage and attempts to destroy Turkish constitutional order and the government. Authorities allege that he is linked to the Gulen movement, which Turkey blames for a coup attempt in July 2016. The United States has denied Turkey's demands for the extradition of the movement's leader, Fethullah Gulen, from his home in Pennsylvania.

Topuz was officially charged Oct. 4. On Oct. 5, the US Embassy in Ankara released a statement saying that officials were “deeply disturbed” about the arrest. It said Turkey was “trying the employee in the media rather than in a court of law” and using “leaks from Turkish government sources.” This detailed media coverage made the possibility of a fair trial impossible, the statement said.

The "leaks" began showing up a week before Topuz was even officially charged. For example, on Sept. 28, state-owned Turkish Radio and Television (TRT) news posted a detailed report. His full legal name, his alleged aliases and the specific locations of his alleged meetings with Gulenists — including room numbers — were published along with the dates of his supposed phone conservations with Gulen members. Details of his alleged crimes of spying and trying to destroy constitutional order were published widely.

"We believe these allegations to be wholly without merit," the US Embassy said, adding that the defendant deserves “due legal process” in accordance with Turkish laws. Turkey and the United States have long had relations that are highly beneficial to both sides, the statement noted, adding, "Baseless, anonymous allegations against our employees undermine and devalue this longstanding partnership."

The most recent moves came Oct. 9, when authorities issued an arrest warrant for the second consulate worker, whom they declined to name. The Turkish justice minister denied the US ambassador's request for a meeting, even as Turkey's Foreign Ministry summoned the US Embassy undersecretary, seeking to pressure the United States to restore visa services.

Topuz, who began working as an employee of the consulate in 1982, supposedly testified Oct. 6. According to news reports, he said that in 1993 he had assumed a position for the US Drug Enforcement Administration in Istanbul. Topuz has not denied making contact with Gulen members who were prominent officials at the time. He said he had to meet with them as part of his job.

Pro-government media outlets and hundreds of social media accounts latched onto his arrest and reported testimony as clear evidence that the July 15 attempted coup was backed by the United States, along with other troubles the government faced: the 2013 corruption probe and the Halkbank investigation. In commentaries, Topuz is frequently labeled in Turkish media as a CIA agent or spy.

Sabah Daily columnist Hilal Kaplan joined the fray, announcing Oct. 6 from her Twitter account that she had been disinvited to US Ambassador John Bass’ press conference because of her newspaper’s headlines about Topuz. In a subsequent tweet, she included an excerpt from the Turkish press in which Bass explained why certain press representatives were absent. He said, “Because I don’t consider them to be [media] outlets any longer, given the extent to which they deal in fiction and do not follow a set of basic journalistic ethics.” Bass emphasized he was disturbed by the Topuz case because some people in the Turkish government are “motivated by vengeance rather than justice.”

In the meantime, pro-government media reported Kaplan’s canceled invitation as press censorship. Kaplan and others kept reiterating the tacit involvement of the US government in the July 15 coup attempt. State-owned TRT World reported the incident with the headline, “US ambassador bans journalist over story she never wrote.”

Public criticism of US Embassy personnel was a recurring theme for politicians long before the coup. For example, in January 2016, Al-Monitor reported that Ankara's mayor, a member of the ruling Justice and Development Party, asked Bass to leave Turkey or keep quiet. Pro-government Turkish media’s relentless efforts to link the US government to the July 15 coup attempt are also remarkable. Just a week after the coup attempt, Daily Sabah’s twitter account was running polls with loaded questions, asking things like which US institution provided the most support to the Gulenist terror group. The options available were CIA, FBI, Department of State and White House (the CIA received by far the most votes). Hence, when a US Consulate staff member was arrested, the Turkish public was ready to rejoice.

A grass-roots movement took off on social media as citizens demanded that US troops be expelled from Turkey's Incirlik Air Base. The movement seemed to be gaining ground Monday. There was also talk of holding a protest in front of the US Consulate in Istanbul.

Topuz isn't the first US Consulate employee to be arrested this year. On March 7, a translator at the consulate in Adana was charged with supporting the Kurdistan Workers Party, which Turkey and the United States consider a terrorist group.