How one sultan's harem is another's school

Emine Erdogan's praise of the Ottoman harem as a school has disturbed and baffled Turks. 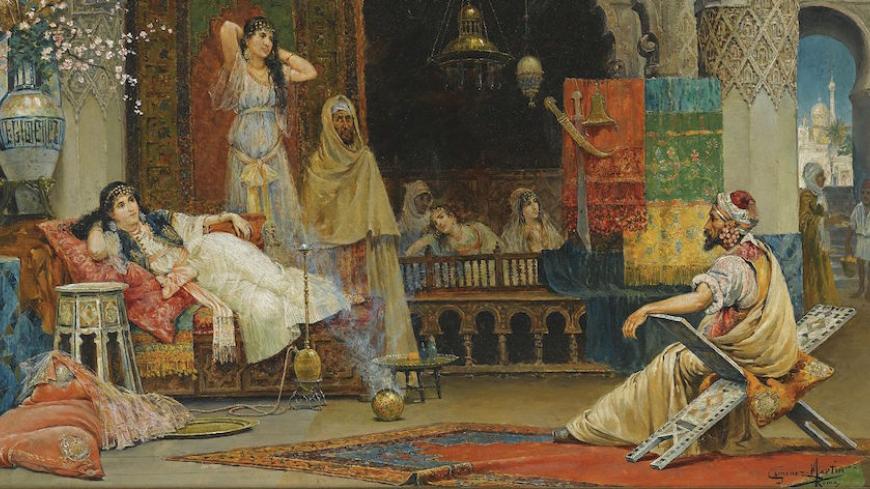 On March 9, Turkey’s first lady, Emine Erdogan, attended an event called “Mothers of Ottoman sultans who left a legacy on our history,” organized by the Ministry of Environment and Urbanization in Ankara. After naming a few prominent valide sultans — the title of the legal mother of the sultan — from the Ottoman era, Erdogan said, “Valide sultans have been pioneers of their generation and examples to our mothers.” Challenging the Orientalist portrayal of the harem as a place where ambitious women battled with the power of their sexuality, Erdogan praised the harem, saying, “For the members of the Ottoman family, the harem was a school. It was a center of education, where women were prepared for life and organized volunteer activities. This household was led by the valide sultans.”

As Erdogan’s speech highlighted, the harem is an intriguing concept to contemporary audiences. The word’s original meaning, “forbidden or sacred,” was applied to the female members of the family. In societies where men and women are segregated, women have their own quarters, the harem. In the Ottoman palace, it would be the quarters where all the slave girls, concubines, eunuchs and the sultan’s female relatives resided. The kind of education provided to residents of the harem depended on the leader and the era in question. Yet it is known that the main role of the young females who were brought in as slaves was to please the sultan and have male babies, providing them the possibility of one day becoming valide sultan, the woman who rules the court.

Erdogan’s passionate praise of the idea of the harem as a school generated strong public reactions. Although neo-Ottoman groups — conservatives, Islamists, as well as pro-Justice and Development Party (AKP) pundits — blame the West for Orientalism, social media discussions indicate that the popular image of the concubines of the harem both horrify and titillate people living in Turkey.

Indeed, despite harsh criticism by AKP elites, series like “Magnificent Century,” about the lives of prominent sultans and their lovers, such as Hurrem or Kosem Sultan, have become extremely popular in Turkey. These shows have also generated a niche for neo-Ottoman goods. Scents named after powerful women of the Ottoman court along with themed bathrobes, bathroom accessories, jewelry and even hair coloring are being sold. Ottoman-era aphrodisiacs to impress your partner have made a strong comeback and can be found in mainstream markets. Most of these products are not designed for Westerners fascinated by the ways of the East but for contemporary Turks. Today, one also has the option of partaking in the palace experience according to one's budget and tastes. For example, Les Ottomans, a fancy boutique and hotel on the Bosporus, offers rooms decorated to provide the unique atmosphere of the eras and tastes of 10 different sultans. US Republican presidential hopeful Donald Trump has even visited the hotel.

The idea of praising the harem was not welcomed by all. In particular, leftist women were quite vocal in criticizing Erdogan. For example, Republican People's Party Deputy Chair Yasemin Cankurtaran said, “I would like to call upon Mrs. Erdogan. The harem, which you referred to as a school, has students or concubines who were brought into the palace by force. They were minors whose bodies and minds were enslaved. … I cannot comprehend how a president’s wife praises a part of culture adopted from Byzantium. This is where one has a brain freeze.” A group called Communist Women was much bolder, declaring war on Erdogan and urging the public to wake the Erdogan family from its visions of monarchy and harem. They proclaimed, “Everyone should know, women cannot be fitted into Erdogan’s harem dreams.”

A scholar of history and cultural studies, who requested anonymity for fear of losing her job, told Al-Monitor, “Was the harem really beyond the sexual intrigue? Everyone had a specific task, and their age, sexual identity and the role that they served was crucial. For example, the lesbian relationships between the concubines and the homosexual tendencies of certain sultans or sons of sultans, along with the stories of the eunuchs, play a crucial role in the survival system of the harem as well. It was a place where you were brought in rather young and robbed of your entire identity. So everyone had to reinvent themselves within the walls of the harem, and sexuality was the center of this identity.”

While journalists working for pro-government media outlets rigorously tried to prove the harem’s educational value, others asked whether the harem could be called a school simply because the residents were educated in certain trades. Ozlem Kumrular, a historian and author of the book “Kosem Sultan,” about the prominent valide sultan, tweeted an image of a painting depicting nude women around a pool, and wrote, “The artist of this harem painting is the last caliph, Abdulmecid. Odd but true.” It is interesting to note that although Kumrular’s message received hundreds of retweets, no backers of Erdogan’s praise of the harem tried to explain the rationale behind the painting. Most of the replies were satirical. For instance, one read, “Could [Sultan] Abdulmecid know the harem better than Mrs. Erdogan? I wonder what class this was.”

Indeed, satire was the most common way Turkish social media dealt with the mysterious education system of the harem. One person tweeted an image showing two college buildings with signs for the Kamasutra Graduate School and the academic departments of Aphrodisiac Chemistry, Flirting and Courting, Palace Intrigues and Poisoning. Another tweet with a painting of a royal court with dancing females read, “So harem was a school. That is why we are left illiterate.” Sefer Selvi, a prominent cartoonist for Evrensel Daily, drew Erdogan with a sign in her hand that reads, “Girls Let’s Go to the Harem.”

Multiple social media users and pundits also criticized the Erdogan family for enjoying the benefits of Western, secular education themselves — all four Erdogan children attended college in the West — while encouraging a different system to domestic audiences. Hence, the most common and mind-numbing question circulating on social media concerned whether Erdogan’s words signaled intentions to establish a harem in their palace of more than 1,000 rooms.

In some countries, a simple comment about a chapter in history might be insignificant, but the efforts by the Islamists in Turkey to redefine a woman’s place and role in the public domain have scarred relations between different segments of the society. It is no longer a question of whether a woman is wearing a headscarf, but of welcoming a regression in women’s rights and glorifying the idea of enslaving women.