In a replay of last year's violence, the Turkish president's security detail was filmed beating up peaceful Syrian Kurdish protesters in Washington. 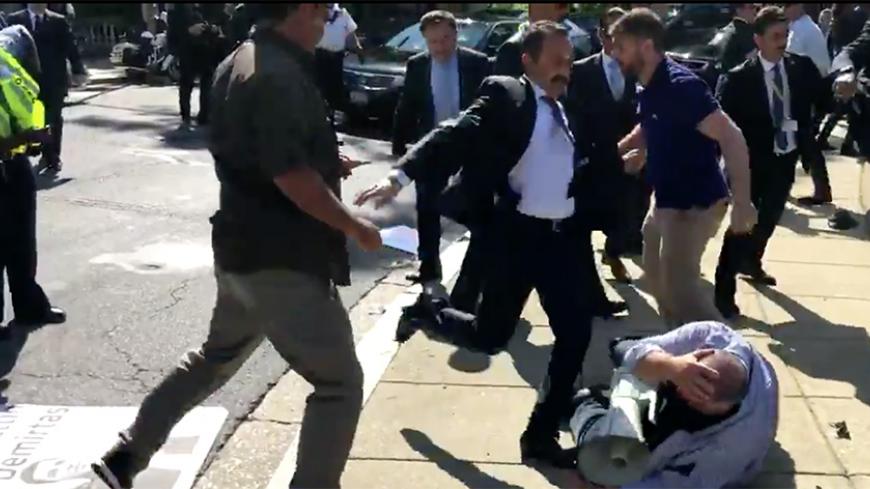 Turkish President Recep Tayyip Erdogan’s security guards attack protesters in this still from a video recorded in Washington, May 16, 2017. - Twitter/@VOATurkish

Oops, they did it again. In a repeat of their scandalous behavior outside the Brookings Institution last year, Recep Tayyip Erdogan’s thuggish security guards managed to literally leave a bloody mark behind the Turkish president’s lightning trip to Washington May 16, beating up protesters in the heart of the capital.

Footage of bloodied men and women wandering dazedly around Sheridan Circle just outside the Turkish ambassador’s residence, where Erdogan was holding court with assorted former US officials, think tankers and business types, has provoked widespread outrage and a sense of despair among protesters, who said they felt that Turkey’s culture of impunity had been carried to American soil.

Eyewitnesses said the brawl erupted when Erdogan’s security detail attacked protesters carrying pennants of the Syrian Kurdish Democratic Union Party (PYD) and the People’s Protection Units (YPG), who are the United States’ top ally in the fight against the Islamic State in Syria.

Lucy Usoyan is a Yazidi-American volunteer at the Washington office of the pro-Kurdish People's Democratic Party (HDP) and also does fundraising for the Yazidi Relief Fund. She told Al-Monitor, “I was exercising my democratic rights, chanting slogans peacefully when Erdogan’s guards attacked me.” Usoyan said she fell to the ground “and they began kicking me in the head and on my back and then I lost consciousness. I can’t understand why they kept hitting me after I fell to the ground.”

The 34-year-old was hospitalized at George Washington University Hospital for head trauma injuries and told Al-Monitor today that she still suffers dizzy spells. She has throbbing headaches and trouble standing up. At least eight other demonstrators were injured.

The guards Usoyan referred to are clearly visible in footage posted online In identical green shirts and cargo pants. They are attacking the handful of mainly Kurdish protesters together with pro-Erdogan picketers who can be heard shouting obscenities at them. Usoyan, who is wearing red trousers, is easily identified among the victims. Two people were arrested in connection with the affair, including one for assaulting a police officer.

The Daily Caller's Chuck Ross reported, "Halil Mutlu, a cousin of Erdogan's and a board member of the Turkish American Steering Committee, was spotted on the sidelines of the fray. At one point he was seen leading a pro-Erdogan chant aimed at government critics."

The HDP’s Washington representative, Mehmet Yuksel, told Al-Monitor, “If they treat us like this here, you can only imagine how they treat the Kurds back in Turkey. It's an absolute disgrace.”

The scenes were a repeat of the violence instigated by Erdogan’s security detail outside Brookings in March 2016 as the Turkish president delivered a speech inside.

This time, another pair of think tanks, the Atlantic Council and Turkey’s SETA were co-hosting Erdogan at the residence of the Turkish ambassador, Serdar Kilic. Once again, Erdogan’s security detail had no qualms about setting upon peaceful demonstrators.

Max Hoffman, the associate director on the National Security & International Policy team at the Center for American Progress, closely follows Turkey. He told Al-Monitor, “This behavior is outrageous and unacceptable, and the US government should publicly condemn it." Hoffman continued, “While the Trump administration may not care to hold Erdogan accountable for his abuses of human rights and democracy in Turkey, they must at least enforce US laws on US soil.”

In the first official comment from the administration, Jonathan Cohen, the deputy assistant secretary of state for Turkey, Greece and Cyprus, suggested the actions of the Turkish security detail were unnaceptable during a panel at the Middle East Institute. "There is no place for violence in our society," he said.

Just as Cohen was delivering his remarks, the DC police put out an unusually tough statement and vowed to bring the perpetrators to justice.

President Donald Trump was apparently unfazed by it all. “It was a great honor to welcome the President of Turkey, Recep Tayyip Erdoğan, the @WhiteHouse today!” he exclaimed in a tweet posted after the commotion outside the residence.

Turkey’s pro-government media put its own positive spin on events. The pro-government daily Yeni Safak claimed that Erdogan’s guards had “intervened to help the US police” whose forces had proven “inadequate” to handle “the illegal demonstration by the PYD and the PKK.”

The PKK — Kurdistan Workers Party — is listed as a terror group by the United States. It is fighting for Kurdish self-rule inside Turkey and is closely linked with the YPG. Erdogan’s main goal during his meeting with Trump yesterday was to persuade him to ditch the alliance with the YPG on the grounds that the group poses a grave security threat to Turkey.

The other was to extract pledges for the extradition of Fethullah Gulen, the Pennsylvania-based Sunni preacher who is accused of engineering last year’s botched coup against Erdogan. Early indications are that he failed on both counts. A senior Turkish official who spoke to Al-Monitor on condition of anonymity said, “If [Erdogan] had succeeded, I think we would have all heard about it by now."