Second indictment for Erdogan guards over DC beatdown in May

A grand jury in Washington has indicted Turkish security officials accused of attacking pro-Kurdish protesters in the US capital in May, prompting worry that the Turkish president may boycott upcoming United Nations meetings just as the administration seeks to repair ties. 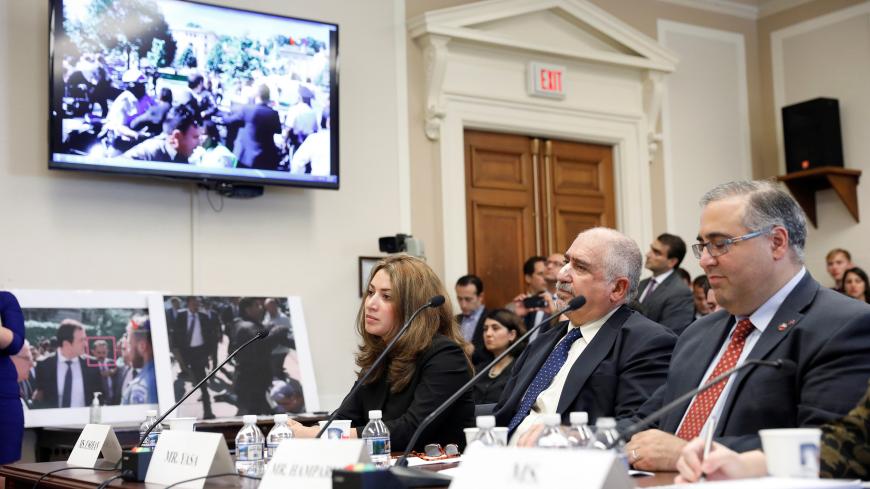 Protesters including Murat Yusa and Lucy Usoyan testify before the House Foreign Affairs Subcommittee on Europe, Eurasia and Emerging Threats about the attack on demonstrators by members of Turkish President Recep Tayyip Erdogan's security detail on Capitol Hill in Washington, May 25, 2017. - REUTERS/Aaron P. Bernstein

Turkey’s fraught relations with the United States are heading for further turbulence after a grand jury in Washington indicted 15 Turkish security officials accused of attacking pro-Kurdish protesters in the US capital on May 16 during a visit by Turkish President Recep Tayyip Erdogan. They include Muhsin Kose, the head of Erdogan’s security detail. In all, 19 people who engaged in acts of violence against the demonstrators outside the Turkish ambassador’s residence on Sheridan Circle were indicted.

In the indictment, the Superior Court of the District of Columbia charged the defendants with conspiracy, bias-related hate crimes, assault with a dangerous weapon and assault with significant bodily injury, felonies that are punishable by a statutory maximum of 15 years. Sixteen of the defendants had already been indicted in June. Three security officials, including Kose, were added to the list in Tuesday’s indictment. An initial hearing has been set for Sept. 7.

Coming only weeks before Erdogan is scheduled to address the United Nations General Assembly meeting in New York on Sept. 19, the indictment has prompted worry that the Turkish president may choose to boycott the event just as the administration seeks to repair ties.

In a statement yesterday, the Turkish Foreign Ministry called the indictment “biased” and “purely political” and claimed that the indictment included the names of people who had never even been in the United States.

A Turkish official contacted by Al-Monitor declined to identify them by name. The official, who spoke on condition of anonymity, complained that the indictment erroneously placed some Turkish security personnel on Embassy Row when they were in fact “at the airport.”

Erdogan has not yet commented on the latest indictment. He blasted the earlier one in June, saying, "What kind of law is this? If my security guards are not going to protect me, why would I bring them with me to America?"

Turkish officials claim the security guards intervened because DC police and the secret service present at the scene failed to provide sufficient protection for Erdogan.

Kose, who would have been in charge of organizing security for Erdogan during his New York visit, has headed Erdogan’s notoriously thuggish security detail since 2012. He oversaw the violent scuffles that erupted between his men and demonstrators outside the Brookings Institution in Washington a year earlier as Erdogan made a speech.

Turkish-US relations remain rocky over the Pentagon’s alliance with a Syrian Kurdish group that has close links to Kurdistan Workers Party rebels fighting for Kurdish self-rule inside Turkey.

Many of the Sheridan Circle protesters were carrying placards vaunting the Syrian Kurdish group known as the People’s Protection Units, which is seen as the most effective force against the Islamic State. Some chanted “Baby killer Erdogan” as the Turkish leader pulled into the Turkish ambassador’s driveway in a black Mercedes sedan.

Footage analyzed by the investigative journalists’ collective Bellingcat suggests that Erdogan may have authorized the assault. They show a man in a suit with an earpiece leaning into Erdogan’s car and then signaling his men, ostensibly to go after the protesters.

The indictment notes, “On or about May 16, 2017, between approximately 4.05 p.m. and 4.13 p.m. Muhsin Kose, Yusuf Ayar, Feride Kayasan, Ahmet Karabay, and other persons whose identities are known and unknown to the grand jury communicated with one another via earpieces.”

Nine people, including two women, were hospitalized after the melee. Lucy Usoyan, an ethnic Yazidi and the founder of the Yazidi Relief Fund, a nonprofit to raise awareness about the mass murder and enslavement of Yazidis by IS, was repeatedly kicked in the head by a member of Erdogan’s security detail until she fell unconscious.

Three months on, she still suffers dizzy spells. She told Al-Monitor, “I can’t say I feel happy about the indictments. I wish none of this had happened.” Usoyan added, “Those people did not act on their own. They were responding to orders from Erdogan. It is he who should face justice and be punished. But he won’t.”