Kurdish protesters who were pummeled by President Erdogan’s security detail last year are seeking millions in damages in US federal court. 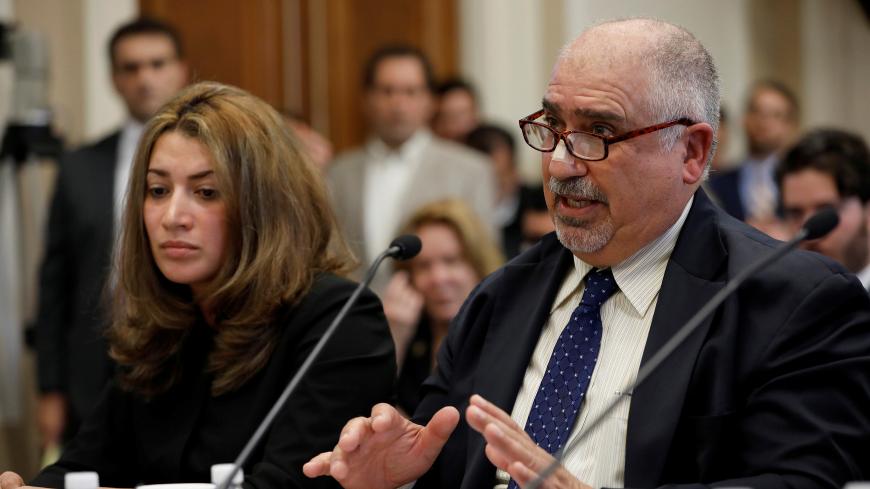 On a recent afternoon in a popular cafe in Washington’s Adams Morgan neighborhood, Murat Yasa, a veteran Kurdish activist, tears up, his burly frame shaking as he recalls the orgy of violence that erupted outside the residence of the Turkish ambassador to Washington on May 16, 2017. Yasa, a 61-year-old US citizen, was among a group of Kurdish men and women who had gathered in Sheridan Circle to demonstrate against President Recep Tayyip Erdogan. The Turkish leader was in town to meet with President Donald Trump that day and the group was peacefully protesting Turkey’s repression of their brethren with a volley of salty accusations. “Baby killer,” Yasa shouted as Erdogan’s sedan pulled into the driveway.

It wasn’t long before Yasa found himself semi-conscious in hospital along with nine other protesters after Erdogan’s bodyguards and thugs for hire set upon them. One yelled “Die Kurd” as they kicked and struck the demonstrators with discernible glee. Lucy Usoyan, a young Yazidi woman who was repeatedly hit on the head, fell unconscious, despite Yasa’s best efforts to shield her. The images captured on video and later subjected to forensic scrutiny leave no doubt as to what had transpired. “I didn’t know if I would ever see my children again,” Yasa said. “I thought I was dying.”

Nineteen months on, Yasa, who runs a floor-laying business in Virginia, suffers from dizzy spells and memory loss. His hands are unsteady. He is, he said, an altered man. But Yasa’s desire for justice is unwavering, with potentially bruising effects on Turkey’s already turbulent relationship with the United States.

In May, Yasa and a dozen and a half fellow victims filed a civil action lawsuit in US federal court against Turkey. They are demanding at least $300 million in compensation on multiple counts ranging from bodily harm to psychological trauma — including, in at least one case, damage to conjugal relations.

Prominent Washington litigator Steven Perles, who has won more than $6 billion in civil lawsuit judgments, has taken up their cause. Perles made national headlines when he helped land a $2.6 billion verdict against Iran for its alleged role in the 1983 Beirut barracks bombing that killed 241 US service members and a $1.5 billion ruling against Libya for numerous bombings, hijackings and other acts of terrorism in the mid-1980s.

A wiry figure full of nervous energy, Perles sounds every bit as tenacious now as he was then. During an interview at his sprawling offices on Connecticut Avenue, Perles told Al-Monitor that the tort case against the Republic of Turkey rests on the Foreign Sovereignties Immunity Act, which stipulates seven violations for which foreign governments can be sued in US courts. “I’d love to see Turkey argue that under US law, ‘We are entitled to beat up people on the streets of Washington, DC,'” Perles said. “No dictator gets to come to my country and beat up citizens of my country on my watch. I’ll take that argument all the way to the Supreme Court.”

Turkey has breezily denied any wrongdoing, branding the protesters as “terrorists” and the actions of its security forces as “self-defense.” Its reaction to the legal case so far has been to act as if it doesn’t exist. Turkey’s toothless media, which is almost fully controlled by Erdogan’s business cronies, has followed suit. A rare mention of the affair came when Foreign Minister Mevlut Cavusoglu made a point of visiting the only two offenders to be arrested, both Turkish Americans, in their jail cell in the United States. Eyup Yildirim of New Jersey and Sinan Narin of Virginia faced a maximum of 15 years in prison for their actions, including stomping on Usoyan’s head. Hailing the pair as his “brothers,” Cavusoglu declared he brought them “love and greetings from Turkey.” Photographs of the encounter were splashed across the Turkish press. The pair walked free in late April of last year after striking a plea agreement.

In November 2017, federal prosecutors dismissed charges against seven members of Erdogan’s security detail who had been indicted by a federal grand jury that July on a slew of charges, including aggravated assault, conspiracy and hate crimes. Although the men had already left the country, the warrants seemed to carry a powerful message that foreign agents could not act with impunity on US soil. Then in February 2018, the cases against four others were quietly dropped, leaving only four guards on the hook.

Coming just before then-Secretary of State Rex Tillerson’s first official trip to Ankara that same month, a strong whiff of diplomatic appeasement hung in the air. The Trump administration was trying to secure the release of North Carolina pastor Andrew Brunson and to calm Turkish fury over its continued support for the Syrian Kurdish militia known as the People’s Protection Units (YPG). The militants are an offshoot of the Kurdistan Workers Party (PKK), which has been waging a bloody fight with Ankara since 1984.

Brunson was finally freed in October, after protracted haggling. Retaliatory sanctions slapped by the Trump administration on the Turkish ministers of justice and the interior were lifted in exchange. In a further sop to Ankara, Trump announced Dec. 19 that he would be pulling US forces out of Syria, leaving the YPG in the lurch.

Yet Turkish hopes that the Sheridan Circle affair would be buried are proving premature. Andreas Akaras, a litigator with Bregman, Berbert, Schwartz & Gilday, one of two law firms representing the victims, said Ankara has twice rejected service of summons related to the case on the grounds that Turkey is a sovereign nation. But it can only run for so long.

Akaras confirmed that the US Embassy in Ankara had been sent copies of the summons in both Turkish and English. The State Department is legally bound under US law to forward them to the Turkish Foreign Ministry. In a document shared with Al-Monitor, the Department of State Overseas Citizens Services acknowledged Nov. 26 that “Usoyan v. Turkey was mailed to our embassy this morning.”

Turkey has two choices: It could put up a defense in the US district court, or it could continue to ignore the controversy — and risk legal penalties.

The first hearing of what will be a bench trial could be held as early as June depending on when the US Embassy in Ankara formally relays the summons. A State Department official speaking on condition of anonymity declined to confirm whether that had happened yet, but acknowledged that US law requires it. “The US government makes no judgment on the merits of the litigation in question, or whether Turkey enjoys immunity from suit, which is a question to be decided by the courts,” the official added. A Turkish Foreign Ministry spokesman did not respond to Al-Monitor’s request for comment.

Perles said Turkey “can say ‘No’ all it wants,” but if the Turkish government does not acknowledge service within 60 days of the delivery of the summons by a US diplomat, “a federal judge will proceed without Turkey at that moment.” The State Department official in turn confirmed that under US law, “A defendant in a lawsuit (including a foreign government) must file an answer” within 60 days “or risk having final judgment entered against it without the opportunity to present arguments on its behalf.”

Turkey has two choices: It could put up a defense in the US district court, or it could continue to ignore the controversy — and risk legal penalties. “There are myriad ways in which judgments may be enforced,” Akaras said. “Should Turkey have property present in the United States (of which it has plenty), certain parts of that property could be attached to satisfy judgment.” In other words, it could be seized.

Perles speculated that the State Department was unlikely to urge Turkey to reach a settlement before the case balloons into a bigger embarrassment. Typically, US diplomats do not intervene, sources familiar with the department’s modus operandi said. However, Congress, where Turkey is already in trouble over the continued detention of several Americans as well as local employees of US diplomatic missions in the country, could weigh in.

In the meantime, Turkey has allegedly resorted to bullying relatives of the plaintiffs who are in Turkey in hopes of getting them to drop the lawsuits. Several have filed as “John Does” precisely to avoid such harassment. One of them told Al-Monitor on condition of anonymity that police had hauled in family members for interrogation, but declined to provide details for fear their identity may be revealed. Three other victims approached by Al-Monitor declined to speak, even off the record.

Akaras acknowledges that the case could drag on for several years. But he believes it is a strong one. The evidence against Erdogan’s guards, laid out in painstaking detail by The New York Times, among others, is pretty damning. It includes footage of the head of Erdogan’s security detail, Muhsin Kose, leaning into the president’s black Mercedes after it pulled up at the ambassador’s residence. “After speaking with Mr. Erdogan, Mr. Kose talked into his earpiece, and three security personnel who were guarding the president’s car hurried toward the protest,” the Times reported. “The brawl began moments later, and one of these men, a heavy-set bald man, appeared on video punching and kicking people.” It wasn't the first time Kose and his men had roughed up protesters in Washington. In March 2016, they clashed with demonstrators outside the Brookings Institution as Erdogan was giving a talk.

Clobbering dissidents in foreign countries is not a uniquely Turkish habit. In January 2018, a federal judge ruled that the Democratic Republic of Congo had to fork over more than $500,000 to three protesters who were savagely attacked by the security detail of President Joseph Kabila Kabange outside the luxury Georgetown hotel where he was staying. Much like Erdogan’s security detail, the Congolese security officers flew out of the United States within hours of the incident. One of the protesters, Jacques Miango, who was kicked in the throat, the face and the spine, shared Yasa’s disbelief that such violence could unfold in the heart of Washington. “You imagine that those kinds of things can’t happen in America,” Miango told The Washington Post. “But after it happened to me, I know nothing is impossible.”

Yasa, for his part, said he wants justice, not money. His quarrel is not with his native Turkey or its people, but with its rulers because of what he calls the “continued oppression of the Kurdish people.” An out-of-court settlement is out of the question, he said, except under one condition: In the unlikely event that Erdogan were to resume peace talks with imprisoned PKK leader Abdullah Ocalan, Yasa said he would withdraw the case “without a second thought.”

Those negotiations — the first of their kind — broke down in 2015 amid Turkish alarm at the YPG’s rise in neighboring Syria and Ocalan’s apparent reluctance to stop it. Ocalan has been kept incommunicado ever since, while Turkey has carried its war against the Kurdish militants to Syria. “Peace is what we were demonstrating for in Sheridan Circle,” Yasa said. “And if peace were the outcome, our suffering will not have been in vain.”