The Turkish government hires law firm and gets 55-day extension from a US district court in a case where Erdogan's bodyguards beat protesters two years ago in Washington. 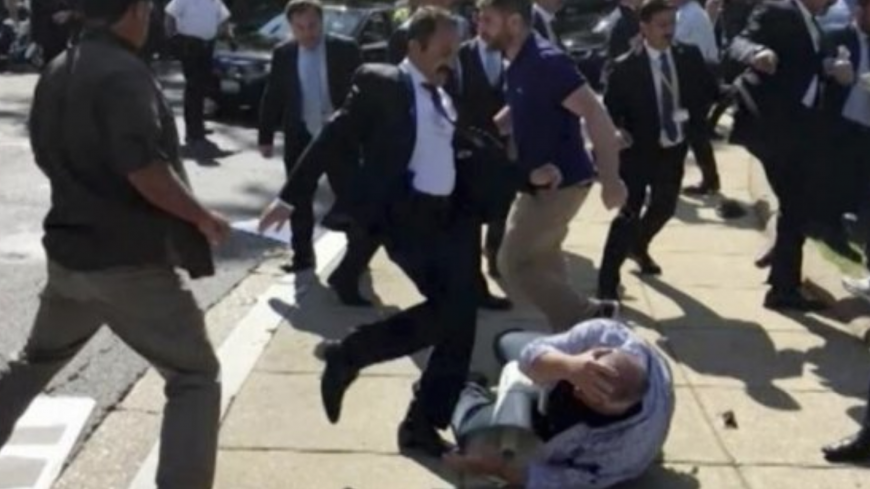 Members of President Recep Tayyip Erdogan’s security detail kick protesters at a demonstration when Erdogan was in Washington in May 2017. - Twitter/ANCA_DC

A looming legal showdown between Turkey and victims of the May 2017 Sheridan Circle beatdown by Turkish President Recep Tayyip Erdogan’s security guards has taken a further turn with the Turkish government engaging the services of the Saltzman & Evinch law firm and seeking more time to assemble its defense. The move marks a departure from the government's previous attempts to downplay the affair, rejecting summons, painting the plaintiffs as terrorists and claiming the guards had acted in “self-defense.”

The US District Court for the District of Columbia said it had granted Turkey’s request to extend by 55 days a Feb. 16 deadline to respond to court summons related to the case. This would enable Turkey “to address the legal, factual and political issues raised by the Plaintiff’s allegations.”

The victims, mostly Kurdish protesters, agreed to Turkey’s request for an extension. Turkey could conceivably use the grace period to try to reach out-of-court settlements with some of the plaintiffs, who are seeking over $310 million in damages for alleged assault, battery, conspiracy and terrorism by the presidential agents.

The violence erupted when the guards attacked the group gathered outside the Turkish ambassador’s residence on Sheridan Circle minutes after Erdogan’s sedan pulled into the driveway. One of the plaintiffs, Lusik Usoyan, a female activist who campaigns for fellow Yazidis, suffered brain damage after being repeatedly kicked in the head. The melee provoked a barrage of outrage, with Republican Sen. John McCain demanding that Turkey’s ambassador be kicked out of the United States.

Gunay Evinch, a principal in the law firm retained by the Republic of Turkey, is well-known in Armenian American circles as a vocal opponent of their long-running campaign to get the US Congress to formally label the mass slaughter in 1915 of over a million of their kin by the Ottoman forces a genocide. The Turkish American lawyer who describes himself as “a leader in the advocacy and defense of Turkish American rights and interests” is a prominent member of the Assembly of Turkish American Associations.

Evinch took part in what he called the “pro-Turkish rally” in Sheridan Circle. He claimed in an interview with the TV station WUSA9 that the Kurdish demonstrators had instigated the violence by charging across the street. He said, “Those provocateurs were successful in getting exactly what they wanted, which was to be responded to.” Evinch has already acted on behalf of Ayten Necmi of Woodside, N.Y., who was briefly detained by Washington police for allegedly punching one of the demonstrators in the face. Evinch did not respond to Al-Monitor’s request for comment.

Andreas Akaras, a lawyer for the plaintiffs, said Saltzman & Evinch’s role was “not clear.” He told Al-Monitor, “It would appear that they will either play a supporting role to a more expert law firm, or they are only temporarily engaged.” The district court suggested the same in its most recent filing on the case. “The undersigned counsel has only recently been retained for this matter and has been advised that there may be additional or alternative counsel retained in this case.”

Either way, some of the victims are perfectly happy for the case to drag on. “I am not interested in the money,” said Murat Yasa, who suffers from memory lapses due to injuries to his head. He told Al-Monitor, “We were told the case could take up to seven years to be settled if and when the hearing starts. The longer the case continues, the longer the media will focus on the kind of man Erdogan truly is. We want the truth to be exposed. For the whole world to know.”