Calls are growing in Washington for a serious response to the violent behavior of the Turkish president's security detail as a high-level investigation opens and a prominent senator speaks out. 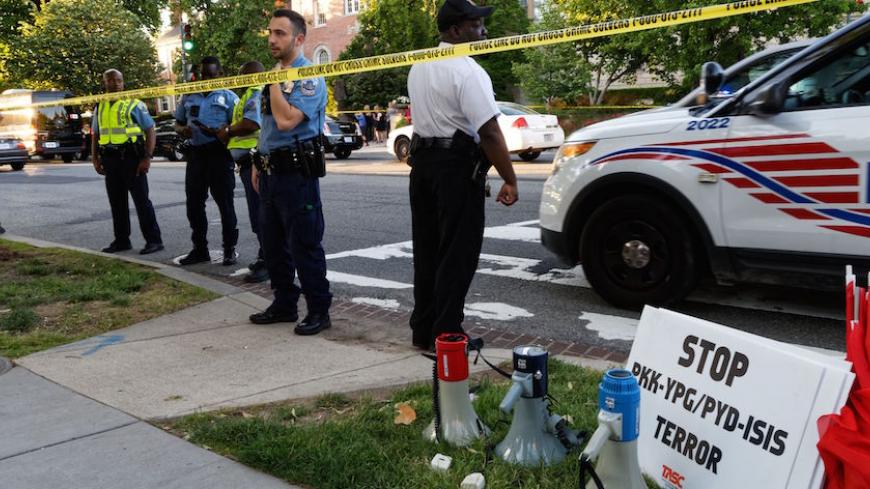 Police secure the street outside the Turkish Embassy during a visit by Turkish President Recep Tayyip Erdogan to Washington, May 16, 2017. - GETTY/AFP photo/Dave Clark

Reaction to the trademark thuggery of Turkish President Recep Tayyip Erdogan’s security detail continued to grow today as US Sen. John MCain, a veteran voice on foreign policy issues in Congress, called for the expulsion of Turkey’s ambassador. “We should throw their ambassador the hell out of the United States of America. This kind of thing cannot go unresponded to diplomatically,” McCain, the head of the Senate Armed Services Committee, told MSNBC in an interview. McCain also called for legal action.

District of Columbia police have teamed up with the State Department and the Secret Service to investigate the bloody fracas outside the Turkish ambassador’s Sheridan Circle residence on Tuesday. At least nine people, including two women, who were chanting pro-Kurdish slogans, were injured after being brutally assaulted by pro-Erdogan demonstrators and individuals thought to be members of the Turkish leader’s security detail. The Wall Street Journal’s Dion Nissenbaum, who was deported from Turkey earlier this year after being held incommunicado for three days over a tweet, reported that the State Department is exploring ways to block members of Erdogan’s security detail from re-entering the United States.

Video footage of the incident suggests that some of the security guards were repeat offenders who were involved in violence outside the Brookings Institution last year while Erdogan was delivering a speech there.

After analyzing footage of the melee, the online investigative journalism collective BellingCat concluded, “The Turkish security officials did not just hold back or try to protect themselves from the protesters, but sought to hurt them, including multiple officials who deliberately kicked defenseless protesters on the ground. … Many of the men who either started the skirmish or injured the protesters were wearing lapel pins, lanyards, and earpieces — all indicating that they were security officials.”

The Turkish ambassador, Serdar Kilic, was summoned to the State Department on Wednesday and rebuked. State Department spokesperson Heather Nauert said, “Violence is never an appropriate response to free speech. … We are communicating our concern to the Turkish government in the strongest possible terms.”

The Turkish government doesn't seem to be getting the message. In a breezy counterstatement, the Turkish Embassy claimed that the demonstrators had initiated the violence and gathered “illegally” outside the residence.

On Twitter, pro-Erdogan trolls were both jubilant and combative. In a typical reaction to the attacks against the protesters, one anonymous user whose profile picture declares “Israel is cold. Oh Allah burn them” praised the assailants: “Oh look how nicely they beat them. Health to their hands, to their legs.”

The Turkish news media all but ignored the affair. Front pages were instead devoted to Erdogan’s threats to intervene in Syria and in Iraq against the Kurdistan Workers Party and the People's Protection Units and his claims that the United States would “knock on Turkey’s door” for help in Syria. Presidential adviser Saadet Oruc asserted in her column for the pro-government Daily Sabah, “Despite endless attempts to provoke a crisis, the recent visit of President Recep Tayyip Erdogan marked an important increase in momentum for the future of Turkish-American relations.”

There is in fact a pretty big crisis, provoked by Erdogan’s own men, and it is growing. Yet the Turkish leadership and its cheerleaders in the media continue to inhabit their handmade parallel universe and feed off their own truths, showing little inclination to pull US-Turkish relations back from the precipice.