US refusal to allow “U-turn transactions” involving the US dollar undermines sanctions relief for Iran. 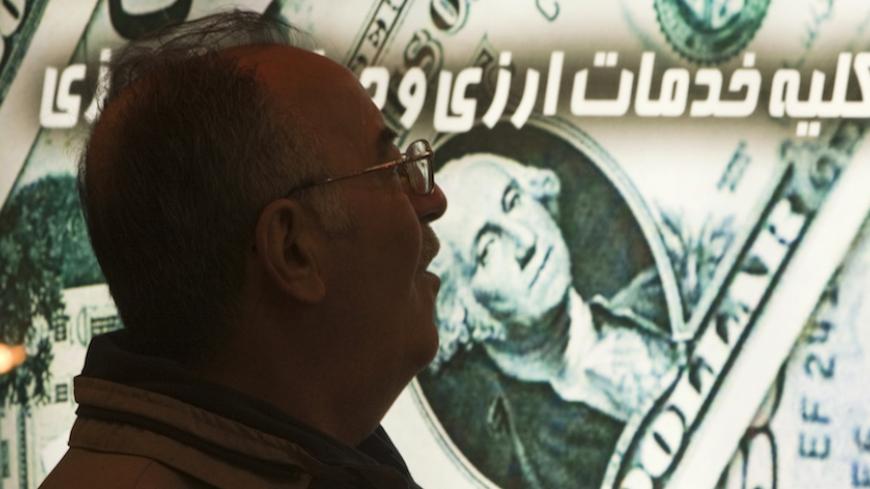 Treasury Secretary Jacob Lew said April 11 that the United States “will keep our part of the bargain” in providing sanctions relief to Iran in return for curbs on its nuclear program, but that the Barack Obama administration would not allow even limited access to the US financial system.

Lew’s comments, in response to a question from Al-Monitor at the Council on Foreign Relations, deepened uncertainty about how Iran will be able to conduct international trade and access hard currency reserves, primarily in Asian banks, that had been frozen under US sanctions until implementation of the Joint Comprehensive Plan of Action (JCPOA) in January.

Banking experts say that given the dominance of the dollar in international trade and finance as the world’s major reserve currency, Iran will have difficulty reaping the full benefits of the nuclear deal without some limited access to so-called U-turn transactions. The term refers to transactions that are priced in dollars — as most oil sales are, for example — that must be cleared through a US financial institution even though the money does not stay in the US bank.

The issue of U-turns has become politically controversial, and there are bills in the US Congress that would categorically outlaw them for Iran. Lew, asked about this by Al-Monitor, seemed to be trying to pre-empt such efforts. “We’re not proposing that the U-turn be changed,” he said.

The Treasury secretary suggested that Iran’s problems in attracting foreign trade and investment had to do with the Islamic Republic’s other policies, both domestic and external.

“Iran has many challenges in doing business,” Lew said. “Some have to do with Iran’s own business practices. Some have to do with Iran’s other activities outside of the nuclear arena where they continue to engage in supporting terrorism, regional destabilization and missile testing that is violating norms.” He also cited Iran’s poor human rights record and noted that the US government maintains sanctions in all these areas.

President Barack Obama, in a press conference April 1, also mentioned these issues and suggested that Iran, while keeping to the letter of the nuclear deal, was violating its “spirit” through its recent missile launches and other actions. Iran must send “signals to the world community and businesses that it is not going to be engaging in a range of provocative actions that might scare business off.”

Lew insisted, “We will keep our part of the bargain, but the US financial system is not open to Iran, and that is not something that is going to change. So the challenge is going to be how to work through an international financial system that is complicated, where there is a lot of attention paid to what US law requires.”

Lew did not answer a question about whether some of the more than $100 billion in oil revenues and other Iranian assets that were frozen in foreign banks after 2012 until this January are in dollars.

Elizabeth Rosenberg, a former Treasury Department official and senior fellow at the Center for a New American Security, told Al-Monitor that if that is the case, “It will be hard for Iran to get access to dollar reserves abroad without some limited U-turn.”

She said that it would also be difficult for Iran to use less-convertible currencies such as Indian rupees for big deals without reference to the US dollar. In the past, Iran has gotten around such restrictions through the use of barter, but it would prefer to buy European products with dollars or euros than to continue to receive goods from India and China.

In his appearance at the Council on Foreign Relations, Lew seemed proud of the fact that challenges to the primacy of the dollar from other currencies, such as the Chinese renminbi, have faded in recent years as China's economy has stumbled and the European Union has faced a series of crises.

“There is really no likely competitor to take the place of the US and the dollar,” he said. This gives the United States “an extraordinary amount of authority and power in the world,” Lew said, calling it “an asset to be protected.”

But while this status boosts the power of US financial sanctions as a diplomatic tool, the sanctions also make Washington a target. Iranian officials, including Supreme Leader Ayatollah Ali Khamenei, have been complaining about the slow pace of economic improvement in Iran since the JCPOA was implemented Jan. 16. Khamenei’s answer is for Iran to expand its so-called resistance economy and focus on self-reliance instead of trade with the West.

Iran also faces challenges from European banks’ reluctance to establish lines of credit or finance investment in Iran due to concerns about a lack of transparency in the Iranian economy and fear of falling afoul of US sanctions that prohibit dealings with individuals on a list of persons designated for involvement in Iran’s missile program, support for terrorism and abuse of human rights.

Having been hit with multibillion dollar fines in the past for sanctions infractions, large banks are wary of inadvertently violating continuing sanctions or new restrictions that might be imposed by a successor administration after Obama leaves office.

Iranian banks also remain identified as a “high-risk" jurisdiction for money laundering and "non-cooperative" in terms of countering financial terrorism by the Financial Action Task Force, an international intergovernmental body based in Paris.

US officials say they are traveling the world to make clear to foreign governments and banks that they are now permitted to do normal business with Iran.

“We will work on an intensive basis to make sure that financial institutions and governments understand what the lifting of nuclear sanctions means and to provide guidance necessary for Iran to get access to the resources and transactions that it has a right to,” Lew said.

There is a danger, however, that if Iran does not see major benefits from the nuclear deal, it will have less reason to continue to comply with its nonproliferation obligations.