In an interview with Al-Monitor, Iranian Central Bank Governor Valiollah Seif said Iran has made economic progress even before the lifting of sanctions and invited American companies to compete with Europeans in trading with and investing in Iran. 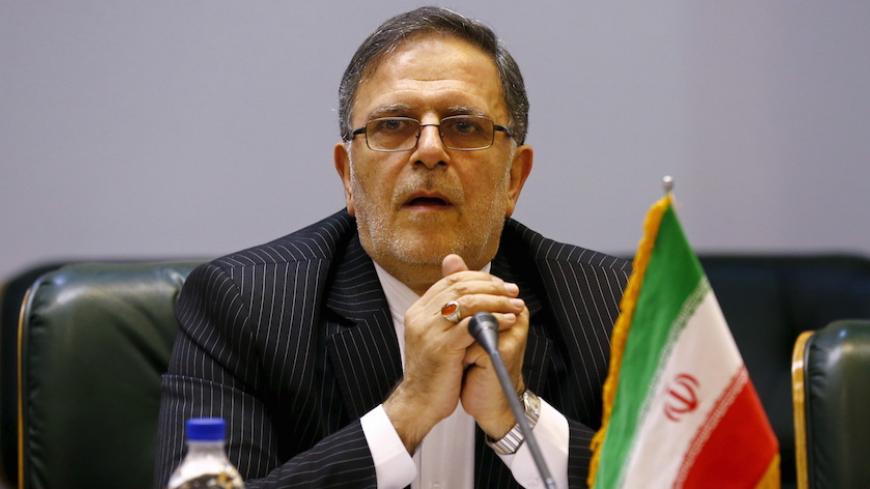 Valiollah Seif, the governor of the Central Bank of Iran, waits to start a meeting with Britain's Foreign Secretary Philip Hammond (not pictured) in Tehran, Iran Aug. 23, 2015. - REUTERS/Darren Staples

The governor of Iran’s Central Bank said that Iran expects the US government to reinstitute limited access to the US dollar to facilitate Iran’s financial transactions with the rest of the world and fully implement the recent nuclear deal.

The comment by Valiollah Seif, in a lengthy and detailed interview with Al-Monitor April 14, sets up a potential confrontation with the Barack Obama administration that could undermine the agreement Iran reached with the United States and five other world powers last year.

Under the deal, known as the Joint Comprehensive Plan of Action (JCPOA), Iran agreed to curbs on its nuclear program in return for what Seif called “effective implementation of the agreement in such a way that Iran’s economic and business activities will be facilitated.” This includes, Seif said, what is known as the U-turn: Transactions that must be cleared through a US financial institution even though the money does not stay in the US bank.

Such brief contact with the dollar is customary when currencies such as the Indian rupee are converted into euros; the dollar is used in pricing the conversion. Iran would like to employ the U-turn to gain easier access to some $100 billion in foreign reserves that had been frozen in Asian banks prior to the JCPOA.

US officials, including Treasury Secretary Jack Lew — with whom Seif met on April 14 — have ruled out reinstituting the U-turn for Iran even though the procedure was allowed from 1995, when the United States ended direct banking relations with Iran and imposed a wide trade embargo, until 2008. Seif made clear in the interview that the JCPOA was predicated on the lifting of all nuclear-related sanctions and that in Iran’s opinion, the U-turn waiver was included.

“This is our expectation, that the agreement will lead to that,” Seif told Al-Monitor with emphasis.

In an appearance April 15 at the Council on Foreign Relations, Seif said Iran had not seen the results it expected after implementation of the JCPOA. “Almost nothing” has happened, Seif said. “In general, we are not able to use our frozen funds abroad.” He asked for more “serious efforts” by the US government to fulfill its commitments to help Iran re-enter the global financial system. “They have not honored their obligations,” Seif said.

The issue of U-turns has become politically charged in the United States and there are several bills in Congress that would outlaw the return of the procedure for Iran. It is not clear how the Obama administration will resolve the issue during an election year at a time when many in Congress are emphasizing their opposition to Iranian actions outside the JCPOA, such as Iran’s continued testing of ballistic missiles, support for the Bashar al-Assad regime in Syria and incarceration of Iranian-Americans. The United States is retaining unilateral sanctions related to missiles, support for terrorism and human rights even as it has lifted so-called secondary sanctions that targeted non-US companies dealing with Iran.

Even with nuclear-related sanctions lifted, Iran’s economy faces other challenges related to gross mismanagement under the eight-year presidency of Mahmoud Ahmadinejad.

Seif told Al-Monitor that the government of President Hassan Rouhani had succeeded in addressing many of the problems it inherited from Ahmadinejad even before the JCPOA was implemented in January. He said that the banking sector, in particular, was making progress in improving transparency and dealing with a backlog of toxic nonperforming loans.

“Before the implementation of the nuclear agreement, we started taking a number of measures in the Central Bank and our banking system,” Seif said. “Those regulations, laws and standards that are important for our banking system to interact and get integrated with the international banking system, our banks are obliged to go through them one by one.”

Seif listed items including “the minimum disclosure requirement in the balance sheets” and increasing banks’ “capital adequacy ratio so they will get closer to international banking norms.” He said, “Another requirement for banks — and this is something new — is that their statements should conform to international finance reporting standards format.”

Iranian officials have been disappointed that large European banks are still wary of returning to the Iranian market. Some have been hit with huge fines from the US Treasury for prior dealings and there is concern about the imposition of more US sanctions or re-imposition of old ones, particularly after Obama leaves office.

Seif said Iran was taking steps to improve its financial image and seeking to convince the Financial Action Task Force, an international intergovernmental body based in Paris, to lift its designation of Iran as a “high-risk" jurisdiction for money laundering and "noncooperative" in countering financial terrorism. Seif said Iran’s parliament passed an anti-money laundering law a few years ago and last month approved a law combating the financing of terrorism.

The Central Bank governor, who has a 30-year career in the banking sector including as chairman and managing director of several state-owned and private banks, said Iran was also taking a number of steps to help banks cleanse their books of non-performing loans and to wind down nonfinancial institutions that offered high interest rates but were essentially pyramid schemes.

Rather than set up a new institution to absorb toxic assets, he said, “The preference right now is for asset management companies to be set up by the banks themselves" to deal with non-performing loans "because they have more experience, know the customer and know how they can collect the bad debt from them.”

Seif said that the Central Bank had also made “very good progress” in closing non-accredited financial institutions and had managed to return deposits in some cases. He blamed Iran’s high interest rates of about 20% in part on these pyramid schemes as well as a lax monetary policy under Ahmadinejad.

Seif said that the Rouhani administration was dealing with frozen and toxic assets belonging to the government and state-owned companies by “organizing that through debt market bonds that are being issued. Related to the nonfinancial fixed assets of banks, here during a time period, the banks can keep a certain amount and liquidate the rest.”

Seif predicted that inflation rates, which have already declined from about 40% under Ahmadinejad to 10-12%, would go down to single digits and that interest rates would follow.

He expressed pride in the fact that Iran’s economy has continued to grow despite the reduction in oil prices and compared that performance with other oil-exporting countries such as Russia, Venezuela and Kazakhstan.

Even while sanctions were in place, “We had relative economic stability in spite of the fact that we had a sharp drop in the price of oil,” he said.

In Washington for the spring meetings of the International Monetary Fund and World Bank, Seif said he met with the Kazakh Central Bank governor, who told him of exchange rate and inflation problems due to the drop in oil prices. “But when you look at Iran, you see that exactly the same time we have had a drop in the inflation rate,” Seif said. “And the countries I have mentioned, they have lost a major part of their foreign reserves. At the same time, we did not even have access to own reserves.”

Under Ahmadinejad, Iran had several different exchange rates that also distorted the economy. Seif said that Iran plans to unify the official rate and market rate by the end of the current Iranian year in March 2017. “Our policy is a managed floating rate,” he said. “Of course, market players will determine what the rate should be. This policy can result in more stability in our markets and in our economy. It will help us in promoting exports and domestic production.”

Asked his expectations for the US economic relationship with Iran post-JCPOA, Seif said, “We have no restrictions for working with American companies.”

The nuclear deal permits continued US trade with Iran in humanitarian goods such as food and medicine and includes a carve-out for civilian airliners and associated services. Foreign subsidiaries of US companies are also allowed to do business with Iran provided that no Americans are directly involved.

“Our country has a lot of untapped opportunities and resources,” Seif said. “We have more than 80 million people. We are located in a region which has 400 million consumers. For American capital goods and production of products for the regional level, I don’t see any kind of restriction.”