A year after the nuclear accord was reached, a top official at the International Monetary Fund said he was impressed on his first visit to Iran by the desire of senior officials there to reform the Iranian economy but that they need to do more to insure sustainable growth. 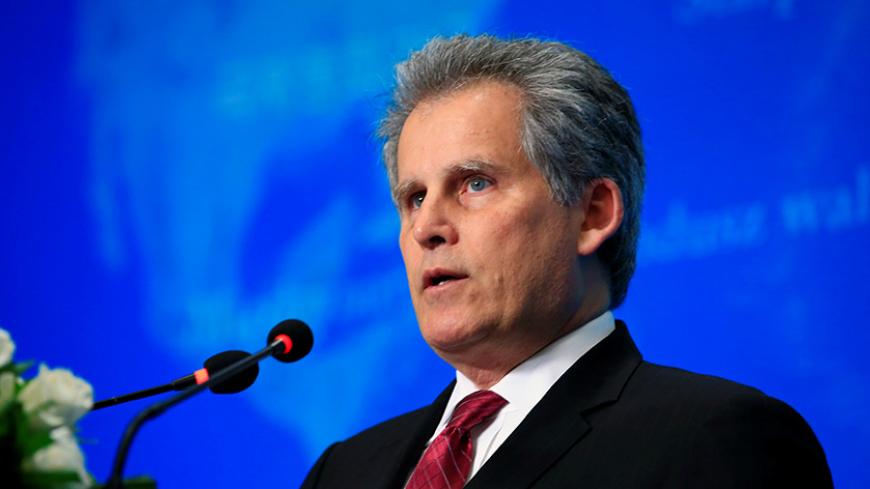 A senior official from the International Monetary Fund (IMF) says that Iran faces a challenge similar to post-Soviet Eastern Europe in modernizing and transforming its economy to take advantage of the opportunities presented by the landmark nuclear accord.

David Lipton, first deputy managing director of the IMF, told a conference at the Carnegie Endowment in Washington June 29, “Iran faces a fundamental choice.” The Islamic Republic can stick with a largely oil-based closed economy with heavy state involvement or seek greater integration, private enterprise and foreign investment, he said.

“The first will fail to generate employment” for Iran’s youthful population, Lipton said, while “the second can succeed but will require a transition on a scale and type countries in Eastern Europe went through” after the collapse of the Soviet Union and its hold over the Eastern Bloc.

Lipton said that while he was not sure what choice Iran would make, he and other members of the first IMF management team to visit Iran since the 1979 revolution found Iranian officials “very interested in restoring growth without rekindling inflation.”

Since Hassan Rouhani became president of Iran three years ago, Iran has cut inflation from about 45% to about 10%. Lipton said the IMF is predicting 4.5% growth for Iran this year, also a significant improvement over the economy’s performance under sanctions. But a number of factors are holding back more sustained progress.

During the delegation’s May visit to Tehran, Iranian officials raised concerns about difficulties in re-establishing links to foreign banks, Lipton said. These were similar to those expressed by Iran’s Central Bank Governor Valiollah Seif during a visit to Washington for the IMF/World Bank meetings in April.

Iranian bankers say that while they have been able to open correspondent accounts in smaller regional and third-tier banks in Europe and Asia, major financial institutions have stayed away for fear of incurring huge fines from the US Justice Department.

US officials counter that they are not “playing gotcha,” in the words of John Smith, the acting director of the US Treasury’s Office of Foreign Assets Control, and will not penalize foreign companies that do due diligence about their Iranian counterparts but inadvertently make mistakes. Foreigners are particularly worried about a lack of transparency in Iranian banks and fear that they might unknowingly have contact with persons or organizations on a list of about 200 still sanctioned by the US government.

While in Tehran, Lipton said, the IMF team spent a lot of time discussing Iran’s efforts to get the Financial Action Task Force (FATF), an international intergovernmental body based in Paris, to lift its designation of Iran as a “high-risk" jurisdiction for money laundering and "non-cooperative" in countering financial terrorism. Iran and North Korea are the only two countries on FATF's blacklist, but the organization recently suspended counter-measures against Iran for 12 months to take account of new regulations the Central Bank of Iran is putting in place to prevent money laundering and terrorism financing.

In response to a question from Al-Monitor, Lipton distinguished between the sort of regime he said Iranian banks need to establish to prevent diversion of funds and the “activities of the state” in supporting groups such as Hezbollah. “Whatever a state does is a separate matter” from these banking procedures, Lipton said.

A cleaner bill of health from FATF might give more confidence to big foreign banks to return to the Iranian market, Lipton added. He said the IMF is providing technical assistance to Iran to carry out these reforms.

The IMF is urging Iran to make a number of other fundamental changes in its economy to fully profit from the relief from nuclear-related sanctions under the Joint Comprehensive Plan of Action.

Iranians have complained that the economy has been slow to take off and there are concerns that that could undermine political support for the government of Rouhani, who faces re-election next year.

To attract needed private and foreign investment, Iran needs “a broad liberalization of the economy,” Lipton said, that would challenge “vested interests that have benefited” from a more closed system such as the Revolutionary Guard Corps and religious foundations.

Iranian officials at the Central Bank said Seif was not available to respond to a request for comment on the IMF suggestions. But in his April interview with Al-Monitor, Seif acknowledged deficiencies in the banking sector that he said he was addressing.

Lipton said he talked with Iranian officials about his experiences advising Poland in the 1990s after the collapse of communism and the problems that afflicted Asian countries during a banking crisis two decades ago because of an overly intimate relationship between the banks and local governments. He said he asked an Iranian official, “Does this sound familiar?” and the Iranian, whom Lipton did not identify, “smiled and nodded his head.”

A rare high-level American to visit Iran, albeit as an official of a multilateral organization, Lipton, a former undersecretary of the Treasury for International Affairs under President Bill Clinton and National Security Council senior director for Barack Obama, said he was impressed by what he called “a pretty normal and positive environment” in Tehran and by his interlocutors at the Central Bank, other banks, the chamber of commerce and at universities.

“These are people who really want to make change,” Lipton said. “Whether they will win the day with the senior government leadership and conservative side of society, I don’t know. They want to understand how to succeed.”