How one tragedy is bringing Afghans, Iranians together

The horrendous murder of a 6-year-old Afghan girl living outside Tehran brings Afghans and Iranians together. 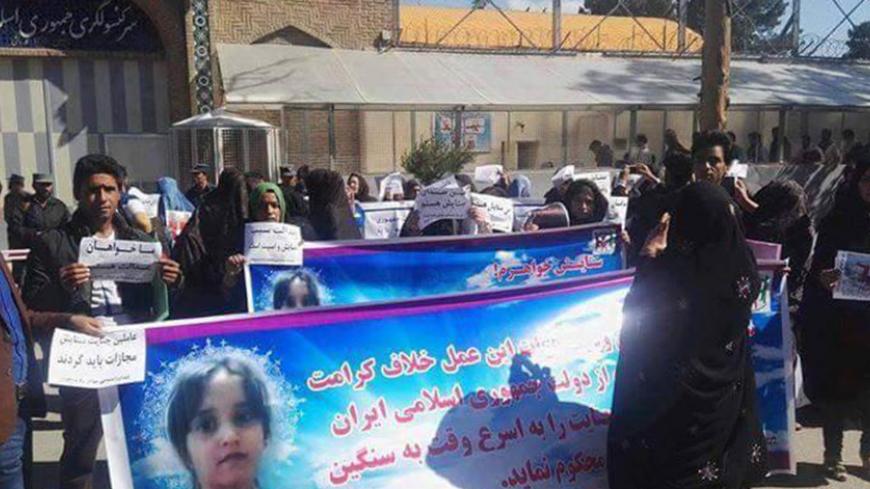 A group of supporters is seen assembled in front of a civic association building in solidarity with Setayesh Ghoreishi, a young Afghan girl raped and killed, allegedly by a teenage Iranian neighbor, in the Tehran suburb of Varamin, April 20, 2016. - Facebook.com/IAmSetayesh

Afghans and Iranians alike are in uproar over the horrendous fate of a 6-year-old girl on the outskirts of Tehran. Afghan national Setayesh Ghoreishi was brutally raped and killed on April 10, allegedly by her teenage Iranian neighbor Amir Hossein in the suburb of Varamin. Fury grew when the crime went unreported in Iranian media, prompting an outpouring of solidarity and advocacy online.

“Afghans were sick and tired of their own relative silence and the Iranian government’s systematic oppression against them over the past 30 years,” Qudratullah Rajavi, an Afghan migrant and civil rights activist based out of Kabul, told Al-Monitor. He launched the Facebook page I Am Setayesh with hashtags #JusticeForSetayesh and #IAmSetayesh. The page has received over 10,000 “likes” since its creation on April 15. A Wikipedia page has also been created to share Setayesh’s story.

Rajavi said, “The winning factor was a bombardment of comments on the official Facebook page of UNICEF, asking the international organization to seriously follow up on the case, as we feared that Setayesh may soon be forgotten like other similar cases in the past.” Indeed, UNICEF responded to every comment that was posted on its page.

The Ghoreishi family has received huge support from both Afghans and Iranians — both in public and on social media. Journalist and women rights activist Jila Baniyaghoob joined a candlelight vigil in front of the Afghanistan Embassy in Tehran. Police dispersed the group, arguing that it did not have permission for a rally. Police officers reportedly told the crowd, “Aren’t you Iranian? Why have you come for the Afghans? Don’t you know how many crimes the Afghans have committed here? Why are you defending them?” Some women in the crowd accused police of being racist, only to be threatened with arrest.

Yaghma Golrouee, a prominent Iranian poet and songwriter, has joined the wave of solidarity with Setayesh’s family. He Instagrammed a photo of himself wearing a "pakol" (Afghan hat) with the hashtag #IAmAFriendOfThePeopleOfAfghanistan. Golrouee begins his caption with, “Whether we like it or not, we are a racist people. Proud of [our] history, [our] ancient civilization and its kings — from Cyrus [The Great] to Nader [Shah] and even the mythological kings of the Shahnameh [epic], with a tad of Aryan blood with a sacred formula which no one is aware of.”

Ever since the Soviet invasion in 1979 and the decades of ensuing war in their country, Afghans fleeing conflict and violence have taken refuge in neighboring Iran. Some estimates put their number in Iran as high as 3 million. The Islamic Republic is quick to say it has taken in one of the largest influxes of refugees in the world. Yet many laws still discriminate against Afghans. There are, for instance, arbitrary limits on marriage rights, access to education, employment and restrictions on freedom of movement.

Since 2002, there have been numerous impositions of “no-go areas” for Afghans in Iran. This was initially applied to border provinces but is applicable to 31 provinces with the exception of Alborz, Tehran and Qom provinces. Security forces have arrested and deported Afghan families who continue to live in those areas or pass through them, regardless of whether they’re registered refugees.

In 2012, Afghans were banned from celebrating the last day of the Iranian New Year — Nowruz, which is known as "Sizdeh Bedar" — in a popular park in Esfahan. According to a senior police official, a number of Afghans had caused trouble and the ban was put in place to ensure the safety and security of Iranians. In response to the latter, two Facebook pages appeared: “We are all Afghans” and “Iranians opposed to ethnic discrimination against Afghan immigrants.”

Some Iranians accuse Afghans of spreading crime and drugs in Iran. As in other places around the world, Afghans are blamed for stealing jobs — particularly in dire economic times — even though they are often low-wage jobs in unbearable conditions that Iranian workers avoid. However, many Afghans aren’t just the stereotypical laborer. As Rajavi said, “A significant number of Afghans in Iran are intellectuals, poets, writers and even inventors.”

Of course, not all Iranians view Afghans in a demeaning manner. Many have come out against discrimination and support their plight. Comments in many articles on Setayesh’s murder give a sense that Iranians believe Afghans are unjustly stereotyped. But that doesn’t stop everyone from seeking revenge.

Over the years, there have been numerous stories in Iranian media about Afghans murdering Iranians. In 2012, when two Afghan men raped and murdered an 18-year-old Iranian girl in the central city of Yazd, mobs looted and burned dozens of Afghan-owned homes and businesses. Eyewitnesses say police were present but didn’t do anything to stop the mobs.

Khofashe Shab ("night bat") — an (allegedly) Afghan man who murdered a number of Iranian women years prior — sparked similar attacks. Indeed, there were widespread assaults on Afghans in Tehran and even some rumors of Afghans being murdered in response to the night bat’s actions. In the end, he turned out to be an Iranian from northeastern Iran.

Since Setayesh’s story came to light, Afghan civil society and the country’s lower house of parliament called on Iran to prosecute the teenage boy responsible for her murder.

Sadiqi Zada Nili, an Afghan parliamentarian from the Daikundi province, said Afghanistan hopes the Iranian judiciary will impose the death penalty. “If the Iranian government does not prosecute the murder case of the Afghan refugee girls, the rape and harassment of cases against Afghans will increase in this country,” he said.

Meanwhile, Kazem Gharibabadi, the deputy secretary-general of the High Council for Human Rights and Judicial Cooperation in Iran, has condemned the murder and called on the Iranian judiciary to address the tragedy and bring the criminal to justice. Gharibabadi said, “There is no difference between Iranians and Afghans regarding legal procedures in Iran’s justice system.” Iran’s parliament echoed a similar response. Even Seyed Hassan Khomeini, a grandson of the founder of the Islamic Republic, Ayatollah Ruhollah Khomeini, has weighed in on the incident.

The father of the alleged murderer told the semi-official Fars News that his family will accept whatever the law orders. Amir Hossein’s mother added, “He is only 15; they are publicizing that he is 18 or 20, but these are all lies. He has a birth certificate and papers. My child doesn’t even have a national identity card yet.” If true, this would make Amir Hossein a juvenile offender.

Amid all this, Rajavi, the Afghan civil rights activist, said the Facebook page he set up is against capital punishment and respects international law. “I hope that this incident changes the attitude of a significant number of Iranians who are to some extent racist toward Afghans and instead treat them with dignity,” he said. The outpouring of solidarity from Iranians is definitely a starting point.