Iranians are pressuring the government to help Afghan nationals with the problems they face, including discrimination and lack of access to schools. 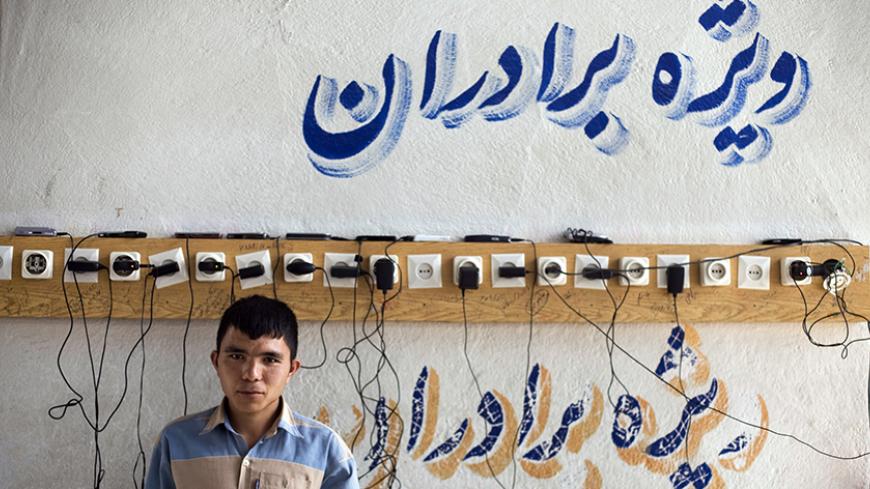 An Afghan man living in Iran waits for his mobile phone's battery to be charged in Behesht Zahra cemetery, in south Tehran, April 1, 2008. - REUTERS/Morteza Nikoubazl

News in recent weeks about Afghan nationals and refugees being harassed in Iran has focused the attention of civil society activists as well as the media on the problems that members of this community face.

Shahrvand reported Dec. 16 that a third-grade teacher in an Afghan-only Pakdasht school, southeast of Tehran, had forced four students who had forgotten their textbooks to stick their hands in a toilet. The news went viral in Reformist, moderate and even conservative publications. A number of newspapers (including Donyay-e-Eghtesad, Farhikhtegan, Quds, Jahan-e-Sanat and Shargh) and news websites (among them Aftab, Alef, Khabar online and Tabnak) published articles critical of the punishment.

These reports coincided with the posting of a three-minute video that went viral, showing policemen harassing Afghan refugees. In the footage, filmed by two police officers using a cell phone camera, the Afghan refugees are shown following their orders to do jump squats. They then tell the Afghans to look into the camera and respond to their questions: Do you like me? Are you happy with me, my fellow citizen? I haven’t hurt you, have I? Do you like me? The Tasnim news agency described the video as shameful. Two years earlier, another viral video had shown a police officer telling Afghan refugees to hit themselves in the head.

In the recent cases discussed here, officials in the Education Ministry and in the police force confronted the offenders and fired them, but the reprimands have had no effect on ending discriminating and humiliating actions toward the refugees.

According to statistics published by Iranian and Afghan immigration authorities, an estimated 2.5-3 million Afghan refugees reside in Iran. Approximately 1 million of them are there illegally, living primarily in cities. According to the latest Iranian census, from 2006, 93% of refugees in Iran are Afghans.

Mossadeq Parsa, an Afghan civil rights activist and executive director of the Bahavi Foundation, spoke with Al-Monitor about the problems Afghan refugees face in Iran. “All the governments, including [President Hassan] Rouhani’s government, have violated the basic and human rights of the refugees. The ban on education, torture in camps, deporting refugees without considering environmental and climatic conditions and tens of other examples add to the problems Afghan people face.”

Civil rights activists have protested violence against Afghan refugees, barriers to employment, the impossibility of retaining citizenship rights and discrimination in educational opportunities. They have demanded that the Iranian government protect them as individuals through legislation.

Jila Bani Yaghoub, a Tehran-based journalist and winner of the Reporters Without Borders Freedom of Speech Award, considers the recent reactions to harassment of Afghan refugees and students a promising development. In an interview with Al-Monitor, she said, “I think civil society’s approach to the Afghan community’s problems in Iran has improved. For example, in the recent case of harassment of Afghan students, social media responded seriousl​y, which forced the government to react and even appoint a representative to follow up on the issue in Pakdasht. I think the pressure by Iranian civil society made the Education Ministry react.”

Bani Yaghoub said that a few lawyers had announced their willingness to take on the Afghan students’ case, but, she stated, “Their fathers did not accept it. They are refugees in Iran and are afraid that the case would put pressure on them in the future … But their worries might be baseless. Especially because they have the activists’ support, it would be unlikely that the government would make a problem for them.”

That said, according to Bani Yaghoub, the refugees' fear of the authorities' reactions was reasonable. “You can understand the pressure when one of the student’s fathers says in an interview that he was surprised by the positive reaction of school officials and the Education Ministry,” she said.

Narjes Barahouyee, a Tehran-based political analyst, believes that the media can bring effective pressure to bear on improving Afghan refugees’ rights, stating, “The media must sensitize society and the government about refugees’ rights so they can generate public participation for improvement of Afghan people’s rights. As you can see, the dismissive attitude against Afghans is already declining.”

Immediately after news spread about the harassment of Afghan students in Pakdasht, pages appeared on social media networks, such as Facebook, in support of the rights of the refugees. One page, “We are ashamed of Afghan children’s lives in Iran,” attracted 20,000 members in just a few days.

Despite pressure from civil rights activists and the media to improve the situation of Afghans, it does not appear that government policy will go beyond prohibiting obvious violations of their human rights, such as prohibiting harassment and torture.

The recession in Iran caused by international sanctions along with rising unemployment in recent years has stopped government institutions from seriously tackling Afghan refugees’ rights. An economic expert in Tehran who spoke on condition of anonymity told Al-Monitor, “In the last three years, sanctions really influenced Iranian economic indexes. It was like a storm. The unemployment rate, inflation rate, they are at their highest level in the last 20 years. Naturally, the main worries for both the [Mahmoud] Ahmadinejad and Rouhani administrations were and still are how to fix the economic situation of the Iranian people to soothe their dissatisfaction. There is no priority for Afghan refugees’ rights.”

In a July 2014 decree, the Rouhani administration urged all ministries, organizations and government-run companies to only hire Iranian workers, except in exceptional cases, and then only foreign nationals with specific residence permits.

In a Dec. 29 interview with the Iranian Students' News Agency, Alireza Rajaei, head of the vice president’s office said the government was taking measures to provide access to education for 350,000 Afghan students and 500,000 other people denied access to schools. At present, Afghan children without refugee cards are banned from enrolling in schools.

Foad Shams, a Reformist journalist at the weekly Seda, told Al-Monitor, “The reality is that while Iran and its government are under cruel sanctions by the West and the US, no one can expect the Afghan refugee issue to become a priority. If the international community is worried about Afghan refugees in Iran, they must remove the sanctions so that the Iranian economy can improve and can support Afghans.”