The recent case of an 8-year-old Iraqi girl who was beaten for not wearing a headscarf has highlighted the ongoing use of violence as a form of punishment in Iraqi schools. 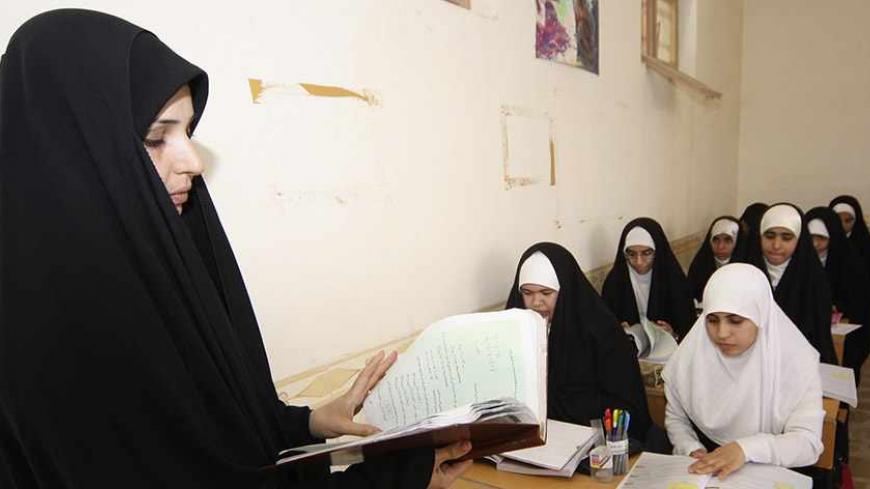 Third-grade student Fatima, 8, was harshly beaten by her religious education teacher for not wearing the veil. This incident happened in the Khawla Bint Al Azwar School in the Madaen district of Baghdad on Nov. 15. Different photos and reports showed marks of the harsh beating on her face, where red and purple bruises clearly appeared alongside impressions of fingers.

Fatima is one of many Iraqi children who suffer from violence in school. This phenomenon has become very worrying for activists and civil society groups, which demand an end to the violence and call for imposing strict sanctions on the perpetrators and avoiding the coercion of students because of their religious and personal opinions.

Al-Monitor found out that the chief of education in Fatima's school region and the school principal formed a committee on Nov. 20 that investigated the incident without officially taking a decision on what happened. The committee was formed in the wake of extensive media and civil pressure from TV channels, social media and newspapers. It is expected that the committee will not take any serious decision due to the grave lack of legislation and to the absence of governmental will to confront violence against children in schools.

Speaking to Al-Sharqiya Channel, the teacher who beat Fatima said, “The child is to be blamed in this incident because she did not wear the veil. The punishment was not serious. It was merely a few blows to the face. Besides, the child's parents gave me permission to discipline her if she misbehaved.”

Moreover, the teacher submitted a report about the decision of the aforementioned committee that was formed for this purpose and which had acquitted her of any responsibility for what happened. The teacher added that she is not the only one who hits children and that spankings every now and then is necessary for discipline, with no harm caused.

She also said that she had used other ways to try to coerce the child into wearing the veil, including threatening to fail her in some religious education tests. Yet, nothing persuaded the girl.

This is not the first case that received large media coverage. Previously, the media found out that the high school principal of a school in the Iraqi city of Kut hit and hurt children. The minister of education visited the school at the time and condemned the act. He also said that the teacher's actions would not go unpunished and that no teacher or employee in the education field has the right to use violence against children.

After several interviews with students in Iraqi schools, Al-Monitor discovered that using violence has become a widely popular phenomenon in schools. Moreover, this phenomenon has not received enough attention, except in extreme cases such as the ones mentioned here. The violent methods that are used vary. The children are sometimes verbally harassed or mocked, and beaten with a hand or object at other times. Usually, the students do not report the teacher out of fear of additional punishment such as being failing in their studies or being ignored.

In the latest development,  the media was informed that the teacher had been fired by the Ministry of Education, but no official announcement was issued by the ministry. Dealing with this problem on a case-by-case basis cannot stop this phenomenon. What is needed is a planned and comprehensive solution that can overcome the issue.

The Ministries of Education and Justice must take more serious measures that ensure violence will not be used in schools. They must impose serious punishments — such as firing the teacher, allocating special courts to handle cases of violence against children, appointing ministerial committees to monitor schools on an ongoing and unanticipated basis or receiving reports from the students who are victims of violence, in addition to resorting to other measures that are applicable in civilized countries.