With poor to absent government supervision and education policies, Iraq’s educational system seems to be stuck in the past. 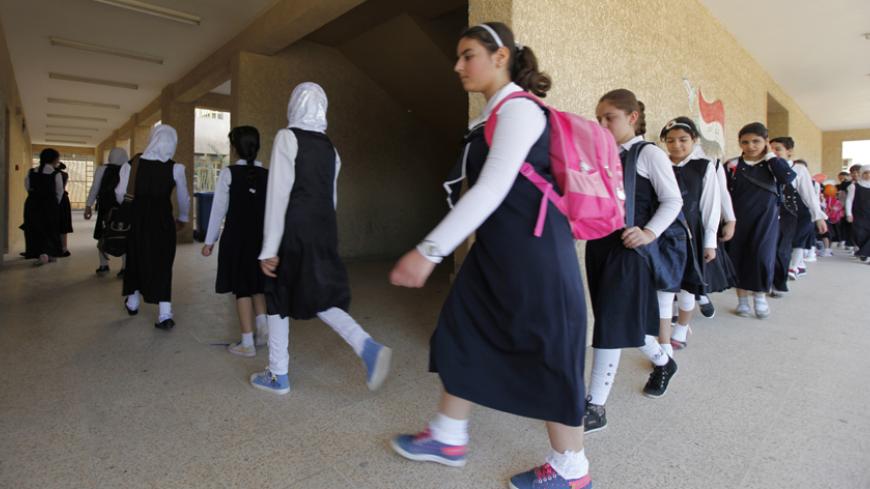 It is no new phenomenon that students in Iraq are exposed to physical punishment at the hands of their teachers. But a video posted on YouTube and social media sites on March 25 showed a school principal slapping students violently in their faces. Ali Hassan, a teacher from the Maysan governorate in southeastern Iraq, told Al-Monitor that the students in the video are 8-10 years old. According to the educational media manager for the Maysan governorate, Mohammed Hamza al-Kaabi, the video had been in the possession of the Directorate of Education for two weeks before it went viral on social media.

As a result, there was a massive wave of demands to dismiss the principal on the grounds of using excessive violence, and to prosecute him.

The video shows the Zahawy primary school principal in al-Kahla region in Maysan governorate — 320 kilometers (199 miles) southeast of Baghdad — slapping students, who were standing next to one another, in their faces and pulling their ears violently. The video provoked the disapproval of the Committee of Integrity, which demanded the arrest of the principal. On March 26, Minister of Education Muhammad Iqbal called for “conducting an urgent inquiry and punishing the school principal.”

The general inspector of the Ministry of Education, Jamila Zidane, told Al-Monitor over the phone, “The ministry’s general inspectorate will impose disciplinary and administrative punishment to deter the abusive principal.”

She added, “The ministry is monitoring the school's compliance with educational systems that prevent violence.”

In Maysan governorate, where the incident occurred, the investigative committee formed by the Directorate of Education on March 26 decided to dismiss the principal.

In the wake of the incident, writer and researcher in social affairs, Sabah Kazem, told Al-Monitor, “There are many teachers in Iraq who think that students become obedient when they are beaten and treated in a violent way, and then start studying and doing homework. All calls to prevent violence in the educational system in Iraqi schools have failed.”

Nazem Alyawi, the principal of Mandali primary school in Babil, south of Baghdad, condemned physical punishment of students and told Al-Monitor, “Some teachers think this is the right way, and that it works for mischievous students to force them to study and obey the rules.”

Social researcher Ahlam al-Khafaji objected, saying, “Violence has psychological effects on the abused student, and it instills the spirit of violence, making it seem like the right way to solve problems in the future.”

She added, “Violence in schools, in addition to domestic violence, breeds a generation that believes in aggressive behavior as the only way to obtain its rights.”

In the same context, one of the main incidents in a series of violence events at schools was the death of a primary school student on March 17, 2014, a month after he went into a coma after being beaten with a metal rod by the school principal in south Amarah, 380 kilometers south of Baghdad.

This fateful event did not deter Abbas Kazem, who teaches at Madhatiya school in the city of Hamza, Babil, from telling Al-Monitor that he supports “terrorizing students in the [classroom], provided that they are not beaten with a cane, as this could lead to physical harm.”

He justified his viewpoint by saying, “Loosening the grip on students will only push them to slacken in their studies and disrespect their family and teachers.”

Academic and instructor Mohsen Ali Atiyeh, who has worked at schools in Babil for more than three decades, placed the video showing students being beaten in a wider cultural context.

“These scenes reflect the prevalence of violence in the behavior of the Iraqis. Violence has become the easiest and most effective way for them to solve problems. Violence varies, as it can be verbal or physical. Beating is either done by hand, cane or weapons of all sorts. People are murdered, corpses are abused and armed tribal conflicts have become commonplace in the country,” Atiyeh said.

He added, “Violence in education proves that the state’s role in maintaining discipline and order is nonexistent. With the absence of this role, groups and individuals have started to feel that force alone is the way to resolve conflicts.”

Atiyeh pointed out that the repeated violent incidents in Iraqi schools “depict backward educational methods and failure to train instructors based on the principles of modern education.”