Iraq's Ministry of Education has failed to provide Iraqi students with their textbooks because of corruption and negligence. 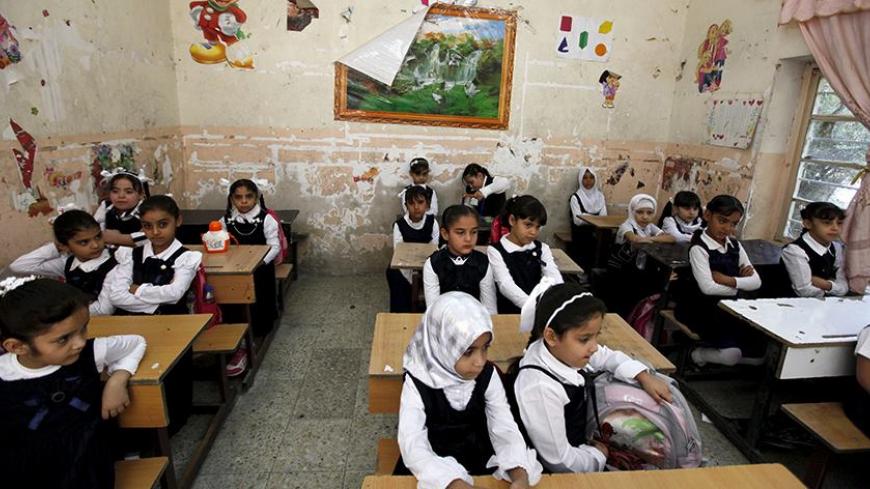 BAGHDAD — The majority of schools in Baghdad and other provinces are currently facing a shortage of textbooks and writing materials. The large number of students in the country find themselves in classrooms that are overcrowded and insufficiently equipped to provide quality education.

Many students have yet to receive their textbooks for this academic year. On Nov. 14, UNICEF offered to print and distribute textbooks for the displaced in several southern Iraqi cities. Some Shiite religious authorities such as Ayatollah Muhammad al-Yaqoubi asked their followers to raise money so that the textbooks could be printed. But the problem is yet to be solved.

Member of parliament Awatef Naameh called Oct. 27 for Minister of Education Mohammed Iqbal to be questioned over the failed education policy. According to a statement by the parliamentary Reform bloc, the interrogation file has been completed.

This situation prompted Basra residents on Nov. 3 to hold a student demonstration in protest of the lack of textbooks, demanding accountability for negligent officials. On Nov. 4, the imam in the Kufa mosque demanded the impeachment of the education minister for not providing the necessary textbooks, which coincided with the calls of demonstrators in Dhi Qar province demanding Iqbal's dismissal.

It appears that there are different reasons behind this education dilemma, as every concerned party has been trying to distance itself from the accusations of negligence and corruption. On Oct. 31, the Education Ministry said that the reason behind the shortage of school supplies was the government’s decision to reduce the budget allocated for printing the books, from 213 billion dinars to 75 billion ($18 million to $6 million). Hence, the ministry has been unable to pay off last year’s debts to the printing companies.

These claims, however, are no justification for the corruption that has also caused a shortage in school materials. The Economic Crime Tribunal in Baghdad said Oct. 31 that it had confiscated 4,000 textbooks that stores run by the Education Ministry had distributed to the black market.

In an unprecedented move, demonstrators protesting in front of the Education Ministry building in central Baghdad in October accused Iqbal of corruption, claiming that his siblings have been printing textbooks with the presses they own in Jordan and selling them to book dealers.

Al-Monitor has learned from a number of citizens that textbooks are available in Baghdad’s Mutanabi Street, where books are sold by dealers at high prices.

Baghdad resident Abdul Amir al-Khafaji told Al-Monitor, “You can find any textbook that is part of the school’s curriculum here, but books are sold at very high prices.”

Member of parliament Kazem al-Sayadi, who is also a member of the parliamentary education committee, believes that corruption is the cause behind the textbook crisis. He told Al-Monitor, “There are some mafias controlling the writing materials and textbook contracts, stealing from the Education Ministry allocations, amounting to 7% of the annual budget. Most of the money that is supposed to be used for meeting the needs of schools is going right into the pockets of some corrupt figures.”

Member of parliament Riyadh al-Saidi, who is also a member of the parliamentary education committee, shares Sayadi's opinion. “The fact that the school curriculum books are found on the black market is further proof that some officials within the Education Ministry are deliberately delaying the distribution of textbooks so that the dealers they are working with have the chance to sell their books and increase profits,” Saidi told Al-Monitor.

What makes things worse in the education sector is the fact that with the onset of the new academic year, which began Sept. 29, there are still many Iraqi cities that lack schools. The country needs 20,000 schools to accommodate all the students. Currently, there are about 16,000 schools in Iraq.

In addition, the overcrowded classrooms contribute to the problem; the number of students who enrolled in 2015 was 9 million. Based on this, Article 34 of the Iraqi Constitution, which stipulates “free education as a right for all Iraqis,” has become a meaningless statement as the reality on the ground shows a different situation.

Teacher Nazir al-Asadi told Al-Monitor that students and teachers in Babil province are suffering from the lack of textbooks and other necessary school materials. “Many students have no textbooks and we had to copy them in a primitive way or buy them from the black market, which cost students a fortune,” Asadi said.

Asadi added in desperation that he has lost faith in the “educational process in Iraq that affects students as they are attending classes without books. This is not to mention the overcrowded classrooms that cause students to lose focus and cause diseases given the lack of ventilation; the temperature in some classrooms reaches 50 degree Celsius [122 degrees Fahrenheit].”

For his part, Kazem al-Najjar, who has been teaching for more than two decades, told Al-Monitor, “The school curriculum textbooks are found on the black market at prices that students’ parents — who are already suffering from bad living conditions — can't afford.”

He added, “The school curricula need to be updated, and not to mention that teaching tools in Iraq are still rudimentary, which affects the entire learning process.”

It is clear that the people in charge of the education sector have to provide the necessary material resources to enhance the field of education, and to push students to be more engaged in the entire educational process by providing the necessary school supplies, books and writing materials.

Haider Rasoul, 10, from Babil told Al-Monitor, “I look at my school and the American and European schools I see on television, where the number of students does not exceed 15 in one classroom. The schools are surrounded by gardens and flowers. Meanwhile in my school, we are about 40 students in one class that is not large enough for us and some of us have to sit on the floor.”