Khamenei orders schooling for all Afghan children in Iran

Iran's supreme leader has ordered that all Afghan children in Iran, regardless of their residency status, be schooled. 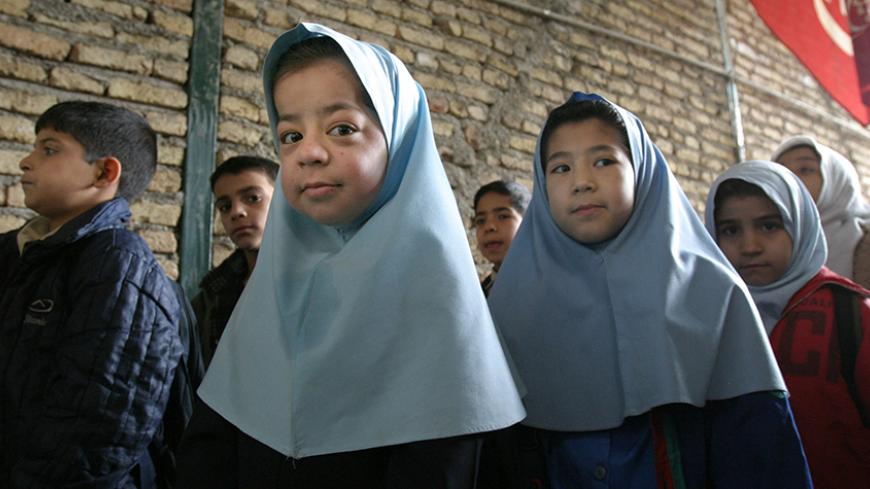 Afghan children wait to enter school for the second shift of classes at a small private school for Afghans south of Tehran, Jan. 17, 2004. - REUTERS/Raheb Homavandi
Arash Karami
@@thekarami
May 19, 2015

Iran’s Supreme Leader Ayatollah Ali Khamenei has ordered that all Afghan children in Iran be permitted schooling regardless of their residency status. This decision impacts hundreds of thousands of children and can help improve the precarious status of the approximately 3 million Afghans in Iran.

According to Tasnim News Agency, Khamenei said, “No Afghan child, not even immigrants who came to Iran illegally and without documents, must be kept from an education and all of them must be registered in Iranian schools.”

Following the Tasnim report, other media and officials immediately responded. When asked about the order on May 19, spokesman for the Hassan Rouhani administration, Mohammad-Bagher Nobakth, said, “This is a thought-out order and the administration knows it to be its responsibility to carry out the order of the supreme leader with precision and in its entirety. The Ministry of Education also will perform its responsibility on this order.”

Tasnim called the news a “big and historical decision.” Reformist Shargh Daily made this story one of their top stories on the front page. Fars News Agency included it in their highlights of the media. Even IR Diplomacy, which covers regional and international news, carried the Tasnim story about Khamenei’s order.

According to Tasnim, “it’s been some time” that Khamenei’s order on the education of Afghan children has been issued. They did not clarify why it has become public now. In December 2014, Deputy Minister of Education Khalilollah Babalu mentioned that Khamenei said, “no Afghan child must be kept from an educationm,” but according to Tasnim, “there was not much of a reaction in other media” about this news. When Babalu made those comments, he did not say whether it applies to all Afghan children or just those with legal residency status.

Alireza Rajaei, an adviser to the Rouhani administration, said recent data show there are over 350,000 Afghan schoolchildren legally registered in Iranian schools, and approximately 500,000 who are not attending school. Rajaei said, “The problem is that their identity has not yet been determined." Rajaei also warned that according to the Convention on Children’s Rights, the services provided to all children must be the same.

Iran is one of the top refugee hosting countries in the world, with most refugees coming from Afghanistan. Afghans began immigrating to Iran in waves over the last 3½ decades, since multiple wars have torn their country apart. Many have taken low-paying jobs with little job security. They face various legal and social restrictions in housing and government services or use of public facilities.

On May 12, Iranian Interior Minister Abdolreza Rahmani Fazli was called to the parliament floor. Two Iranian members of parliament took the opportunity to ask Fazli about unemployment of Iranians in the face of Afghans taking jobs, a not uncommon accusation against Afghans in Iran. Fazli defended Afghan laborers, saying, “The jobs that Afghans have taken are not the type of work that would be done by Iranian laborers; therefore, the job market has not been affected for Iranians.” According to a Tasnim report, Iranian provinces where no Afghans reside or face restrictions have higher unemployment rates than provinces where Afghans are present.