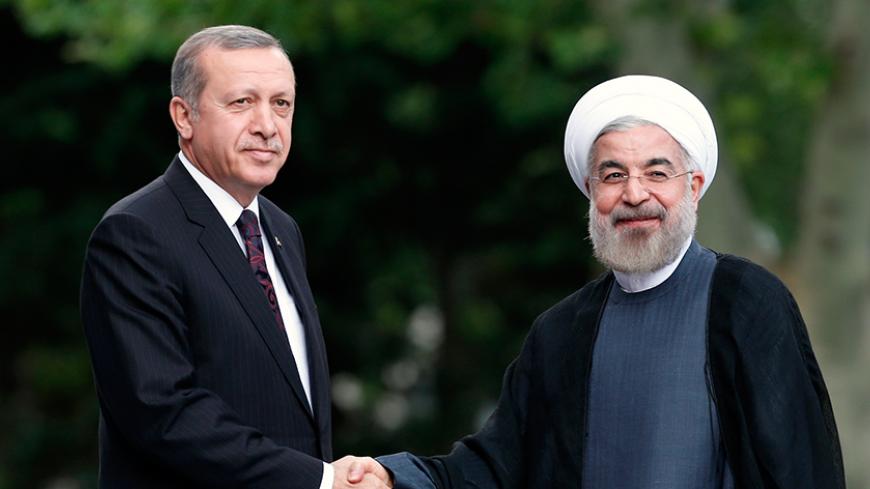 Iranian officials, from the Hassan Rouhani administration to the supreme leader’s advisers, have been attempting to contain the escalating crisis between Russia and Turkey. As those efforts seem to be unsuccessful, there are reports of a growing rift between Iran and Turkey resulting from reports that during a phone conversation Turkish President Recep Tayyip Erdogan warned Rouhani about the negative press he and his family have been receiving in Iran.

At a press conference Dec. 8, Mohammad-Bagher Nobakth, spokesman for the Rouhani administration, said reports about Erdogan “threatening” Iran are “incorrect and questionable.”

Nobakth said, however, that during the phone conversation between the two leaders, many issues were discussed, and “one of them was Erdogan’s concern about articles regarding him and his family in one of the Iranian media outlets.” Nobakht said Rouhani’s response was that “in Iran there is democracy and sometimes media publish such articles.”

Turkish media first reported that Erdogan had warned Rouhani about Iranian media coverage regarding accusations that Erdogan’s family was purchasing smuggled oil from the Islamic State. Erdogan said after the warning, “Fabrications from Iranian officials and news sites were eliminated.” Erdogan’s son Bilal, who owns shipping and maritime assets that control oil tankers, has denied Russian accusations that he is behind the smuggling of IS oil.

Nobakht reminded reporters that Foreign Minister Mohammad Javad Zarif has previously told other countries as well to “never threaten an Iranian,” alluding to Zarif’s now famous line during the nuclear negotiations with the world powers.

Nobakht also questioned those advising Erdogan, saying that while Turkey is currently entangled with Syria, Iraq and Russia, they should not allow relations with Iran to become hostile as well. He also said that Iran is happy that Turkey’s Justice and Development Party won the recent elections, and that it should lead to strong relations with neighboring countries in order to show “the real face of a peaceful and friendly Islam.”

While Nobakht attempted to downplay any harsh words between Erdogan and Rouhani, Iranian media reported Dec. 8 of “another warning from Turkey to Iran.” Fars News Agency wrote that Prime Minister Ahmet Davutoglu “again repeated Turkey’s rhetoric against Iran and said that if Iran continues its hostile behavior toward Turkey, relations between Ankara and Tehran will be damaged.”

According to the Fars report, Davutoglu said that when the entire world voted for sanctions against Iran at the United Nations for their nuclear program, it was Turkey and Brazil that voted against it and supported Iran. However, even when Iran knows that Turkey is in the right, they will not support Turkey.

When on Nov. 24 Turkey shot down a Russian Su-24 fighter jet that had momentarily violated its airspace on the Syrian border, both countries began unilateral sanctions against one another. Iran, which has strong ties to both countries, has been attempting to decrease tensions. Foreign policy adviser to Supreme Leader Ayatollah Ali Khameni, Ali Akbar Velayati, told Iranian television Dec. 6, “We should not take sides and we have a duty to reduce the tensions between the two sides.”