Why Iran stood with Erdogan

Even though Iran and Turkey have major differences over many issues in the region, the Iranian government strongly came out in support of President Recep Tayyip Erdogan amid the coup attempt. The question is why. 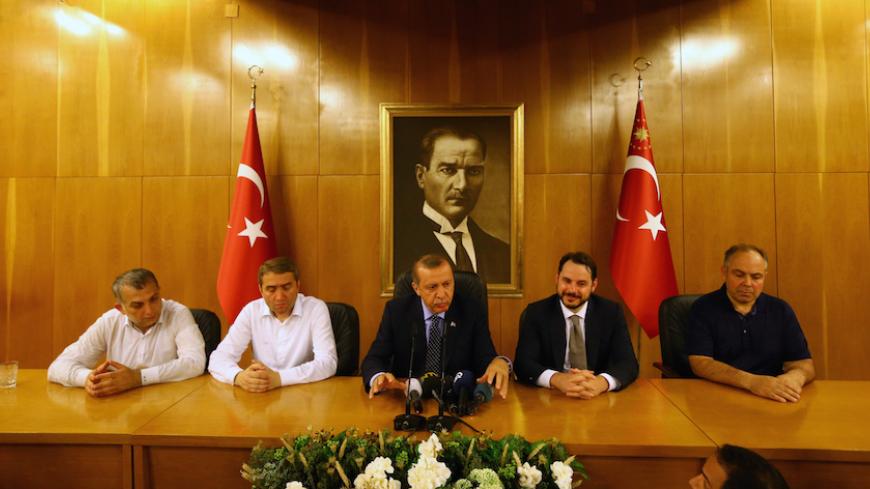 As July 15 was coming to an end in Tehran, Iranian Foreign Minister Mohammad Javad Zarif was on the phone with his Turkish counterpart Mevlut Cavusoglu, whose government was under the threat of being overthrown by a military coup. Meanwhile, Ali Shamkhani, the secretary of Iran’s Supreme National Security Council (SNSC), was on another line with security officials in Ankara. All the while, Qasem Soleimani, the commander of the Islamic Revolutionary Guard Corps’ Quds Force, Iran’s regional military arm, was busy pursuing and reviewing various scenarios that might emerge.

“It’s not a secret anymore,” an Iranian official told Al-Monitor on condition of anonymity. “Zarif, Shamkhani and Soleimani were executing higher orders. The whole establishment was too concerned. Turkey is a neighboring state. President [Recep Tayyip] Erdogan and his government are strong partners of Iran. Our nations enjoy strong brotherly ties, so it’s the least we can do to show solidarity and try to offer any help they might need in such critical times.”

Within hours after the coup attempt began late July 15, the SNSC convened to discuss developments in Turkey. Following the meeting, which was chaired by President Hassan Rouhani, Shamkhani publicly condemned the coup attempt, telling local media outlets, “We support Turkey's legal government and oppose any type of coup — either [initiated] domestically or supported by foreign sides.” Shamkhani said, “What determined the fate of developments in Turkey were the will and presence of the [Turkish] nation and the vigilance of political parties, whose contribution thwarted this coup. Shamkhani concluded, “Our stance is not exclusive to Turkey either. We have pursued the same stance in Syria too. Our position toward all regional countries is that we always prefer people's votes [to decide governments] rather than tribal, sectarian and hereditary governments, and this means democracy."

“A coup in Turkey isn’t something Iran can tolerate,” another Iranian politician told Al-Monitor on condition of anonymity. “It’s true that there are differences over Syria, and sometimes in Iraq. Yet the fact is that there is no direct problem between Iran and Turkey; on the contrary, [bilateral] relations are always advancing for the better. Besides, Iran is opposed to any kind of change by force, and especially when the government [in question] is democratically elected.” The Iranian politician added, “The most important thing is that this experience [the coup attempt] might be an opportunity for Mr. Erdogan to understand the situation in neighboring Syria.”

Indeed, multiple Iranian officials, including Ali Akbar Velayati — foreign policy adviser to Iran’s Supreme Leader Ayatollah Ali Khamenei — brought up Syria in their condemnation of the coup attempt in Turkey. While condemning the coup, Velayati — a former foreign minister — said he hopes “the Turkish government will respect the views and votes of the Syrian people and allow them to decide their own government.” It was a clear message from Iran to Turkey regarding Syria and the future of the struggle in the region. For five years now, Iranian officials have on repeated occasions stated that they have been trying to engage the Turks on a path to address the situation in Syria, and while unsuccessful, have never given up on this approach.

But why is Iran so concerned about the coup attempt in Turkey?

“The stability of the region would have been seriously threatened if the coup attempt had succeeded. Turkey is a major player. Besides, there is the fear that such a move might trigger internal strife,” an Iranian official told Al-Monitor on condition of anonymity. He explained that given the past five bloody years in the region, any such development in Turkey “will shake the whole region” in addition to “Europe, Iran and the Caucasus.” The Iranian official added, “Besides the already shaken Arab countries, what about the [various] ethnic groups within Turkey? Has anyone thought about what they might do?”

Some conservative figures and journalists in Tehran have shown a different reaction toward development in Turkey, influenced mainly by the crisis in Syria.

“It was clear that there’s a gap between the street and the government with respect to what was going on in Turkey," a conservative Iranian political figure told Al-Monitor on condition of anonymity. Many whose understanding of the region is influenced by the war in Syria think the fall of Erdogan would have been a positive development — not only in Iran but also in Iraq, Syria and Lebanon. In this vein, the Iranian political source said that many within this camp “were surprised to see the Iranian government reacting before any other government in the whole world and backing the legitimate [Turkish] government.”

It is important to bear in mind the other important reasons why Iran sees the security and stability of Turkey as pivotal to its own national security. With an Islamic-oriented government in power in Ankara, bilateral relations have improved in the past decade, paving the way for common ground despite differences over regional developments. The latter has been possible thanks to Iranian-Turkish proximity in terms of grander objectives and also similarities in their ways of thinking. Indeed, at the height of the nuclear-related sanctions on Iran, Turkey played a vital role in easing the pressure on its eastern neighbor. Erdogan certainly paid the price for the holes he was accused of creating in the web of sanctions imposed on Iran through what came to be known as the "gold-for-oil scheme" — even while economic ties between the two countries greatly expanded in the sanctions era. With the implementation of the nuclear deal, the two countries now plan to triple their trade volume to $30 billion.

So, beside its public condemnations, did Iran play a role in directly thwarting the coup? Did it, for instance, share intelligence that helped Erdogan preserve his reign? Al-Monitor put forward this question to a senior Iranian official who was in direct contact with Turkish officials during the hours of the coup attempt. His answer was short but to the point: “No.”

Another Iranian official saw parallels between the successful coup against Iranian Prime Minister Mohammad Mosaddegh in 1953 and this year's coup attempt in Turkey. The official told Al-Monitor on condition of anonymity, “What we know is that this move was triggered by foreign hands. We went through the same in the past, and because Mr. Erdogan is today looking forward to playing a better role in the region, they want him down.” The Iranian official said, “There was a message that was conveyed to Turkish security officials: Don’t leave the streets. This coup might be made up of several waves; it happened in Iran in 1953. When the first coup failed, they had another one ready — and they succeeded.”