Turkey shifts toward Iran on Syria

Turkey is resetting its relations with Iran, including over Syria. 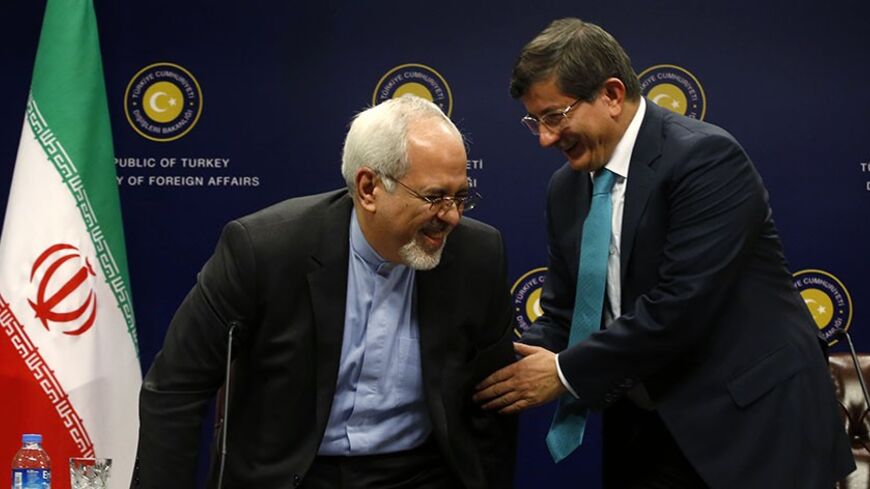 TEHRAN, Iran — What’s going on between Iran and Turkey? Questions are being raised by allies before enemies. The two neighboring, former Islamic empires were thought to be parting with many of their differences over the Syrian crisis, which both regard as a foreign policy priority. Day after day there are indications that Ankara and Iran are heading slowly but surely toward strategic relations, which could result in the countries signing what a source in Tehran described as a “strategic cooperation treaty.”

Turkish Prime Minister Recep Tayyip Erdogan is expected in Tehran within two weeks. Meanwhile, both countries’ foreign ministers exchanged visits within a short time period; Iranian Foreign Minister Mohammad Javad Zarif visited Turkey on Jan. 4, while Turkish Foreign Minister Ahmet Davutoglu was in Tehran a week earlier. As these words are written, Iranian Undersecretary for Arab and African Affairs Hussein Amir Abdulahyan is in Ankara to meet his counterpart. These meetings reflect a high level of coordination between Iran and Turkey. Yet some will ask, what about their differences over Syria?

There’s no doubt that the Syrian crisis rattled the harmony that once brought together Tehran, Ankara, Doha and Damascus, but this meant nothing to Iran’s cooperation with Turkey on a different front. A source in Tehran told Al-Monitor that security officials of both countries met frequently and shared information vital to national security. “There was cooperation, even in Syria. On several occasions Turkish and Iranian mutual efforts helped in releasing kidnapped personnel from both countries. There might be differences in the political goals, but on the security front both countries share the same objectives and won’t do anything that harms the other’s interests.”

It’s not just politics and security, the economy plays an important role in bilateral relations. Erdogan is still paying the price for the black holes he’s accused of creating in the sanction system on Iran, specifically what’s known as the gold-for-oil scheme. At least $20 billion was exchanged in trade between the two countries in 2012, and this figure is expected to increase now that some sanctions on Iran are to be loosened.

Yet, on the political front, what are the Iranians and Turks planning?

On Syria, it’s nearly certain that both countries' positions are moving closer to one another. Turkey is now convinced that a political solution is the only exit from the current bloodshed. Moreover, it's feeling the heat as Islamic radical groups dominate its shared border with Syria, threatening Turkey's security and possibly its economic and political stability. There’s one important last point: Turkey is being pushed out of Syria by other regional powers. Even its allies in the Syrian opposition aren’t as influential as before, and on the ground, the main fighting factions — besides the Islamic State of Iraq and al-Sham (ISIS) — are closer to Saudi Arabia. As a result, Turkey’s role in Syria is diminishing.

Iran is still paying a heavy price to keep Syria’s defiant President Bashar al-Assad in power until the next election. This price varies from lives to money and arms. It’s not a secret that the Islamic Republic gained from the crisis the power of being Syria's regional caretaker — the door that everyone knocks when needed.

Iran’s relations with the region needs normalization. Both Iran and Turkey need each other. Each has its bloc of allies, and moreover, they share the same regional rivals.